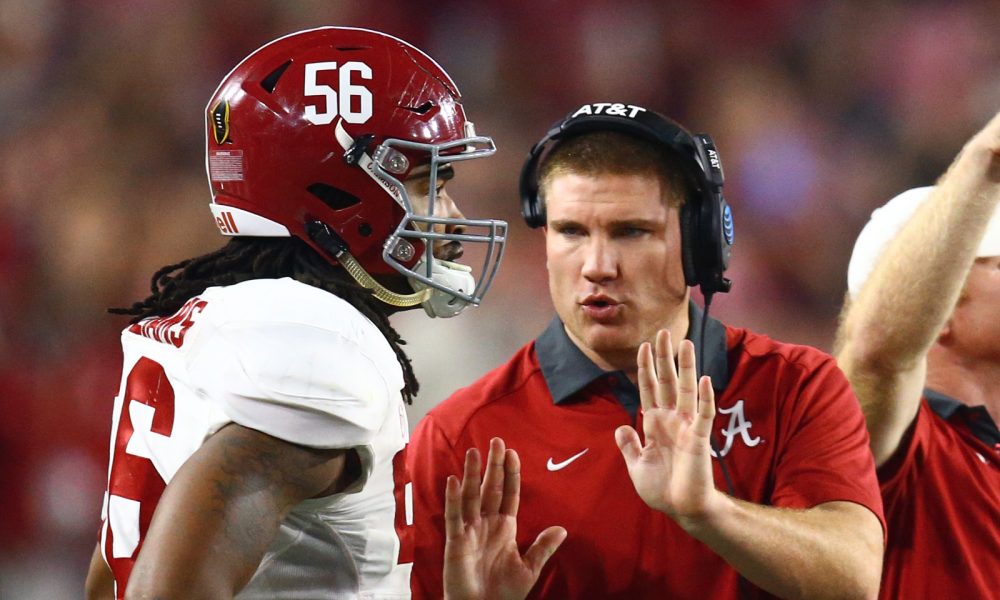 By now, we’ve heard from media outlets and the University of Alabama’s athletic department of communications on the eight-year contract extension for head coach Nick Saban. To pair with his day, his delegates received pay raises and one in particular really got the checkbook opened to him.

Just three years ago, Tosh Lupoi was the new man in Tuscaloosa, Ala.

A young defensive analyst in 2014, he was responsible for processing paperwork, studying film and getting acquainted with as many recruits as he could. After losing Lance Thompson and Kevin Steele, Lupoi would get his chance to be an on-field coach in the summer of 2015.

Upon reaching the field, he was placed over outside linebackers: a position group that has grown tremendously since his first year. In two seasons, the unit has totaled 47.5 of the Tide’s 106 sacks – 45 percent – including racking up 21.5 of the team’s 52 sacks in the 2015 College Football Playoff national championship year.

Lupoi could left for any other program and other schools wanted him; however, the University of California (Berkeley) alumnus sees something special about being at Alabama. Due to his efforts, the Board of Trustees at UA confirmed his contract extension from $550K to $950K through 2020.

The Southeastern Conference’s top recruiter of the Year for 2017 earned the biggest pay raise among the Tide’s assistant coaches. Following the 2016 SEC Championship Game, yours truly caught up with then redshirt sophomore linebacker Jamey Mosley to talk on Lupoi’s influence.

“Tosh teaches us a lot,” Mosley said. “He talks to us not just on the field, but also off the field. He’s a very smart guy. He’s personable and he’s easy to get along with. He loves us. You can tell he loves us and we love him.”

Under his guidance, Lupoi helped both Ryan Anderson and Tim Williams enter the 2017 NFL Draft. While Anderson got selected in the second round by Washington, Williams came off the board to the Baltimore Ravens in the third round. Before Alabama, Lupoi was a west coast guy. He served on the defensive line at both University of California and University of Washington, and prior to that, he played on the front line at Cal.