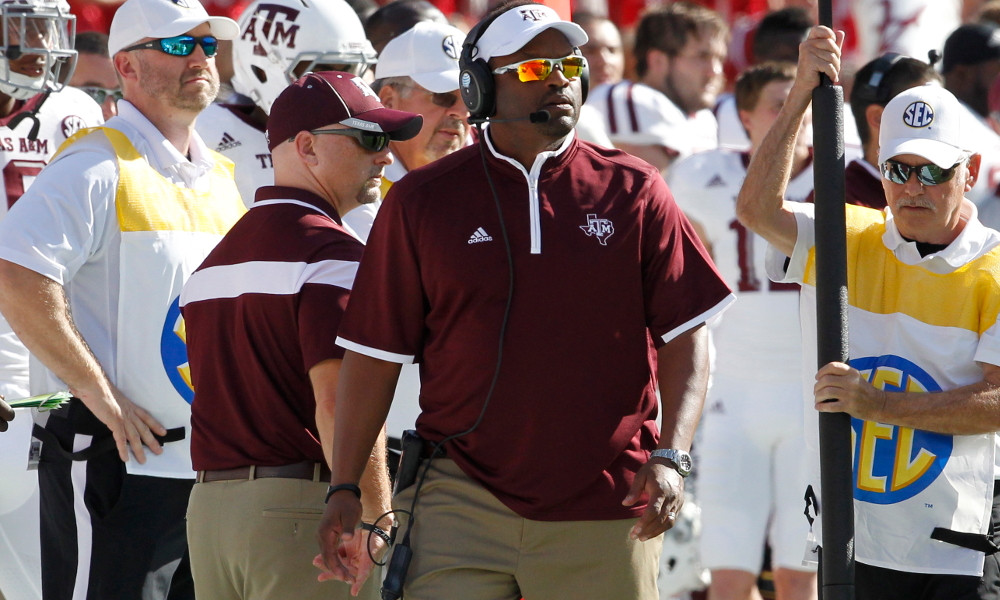 Last year, the ax that is the coaching carousel claimed a victim in the Southeastern Conference. Despite winning a National Championship during his tenure, Les Miles was relieved of his duties at LSU midway through the season. The year before, Mark Richt got the boot after fifteen seasons with the Bulldogs.

It’s a cruel reality of the business. This year, the carousel could take up to three times as many victims as last season.

The following three coaches are ranked from hottest seat, to mildest seat. However, all three could be gone should they collectively fail to produce this year.

The weirdest part to me about Sumlin being on this list is that I actually think he’s the better coach of the three. By far. But, when your own AD says that you know you ‘need to win this year’, it’s much too obvious a choice for him to be on the hottest of seats.

Texas A&M AD Scott Woodward didn't mince words on Finebaum today. "Coach knows he has to win and he has to win this year." #12thMan pic.twitter.com/Qopj1oV1rB

The reason Sumlin makes this list can be summed up into one word: November

Through his five seasons at the helm, his Aggies have looked like this (September & October/November)

Games against Alabama have typically come in mid-to-late October, but it’s typically afterwards that they crumble.

Last season, after starting off 7-0, they came into Bryant-Denny and lost 33-14. They followed that performance up by losing to a bad Mississippi State team, a bad Ole Miss team, and a struggling LSU team.

In 2015, they started off strong, beating a Dak Prescott-led Mississippi State team and a 15th-ranked Arizona State squad. They came into their home matchup with the Crimson Tide 5-0.

They were whooped 41-23 on national television and again followed it up with losses to a falling Ole Miss and a struggling Auburn.

In 2014, they hit their wall early, losing three straight games in October, inexplicably upsetting a highly-ranked Auburn squad, but then losing back-to-back games against Missouri and LSU.

Needless to say, Kevin Sumlin needs to find a way to get his guys to finish. Since the era of Johnny Football has passed, he has yet to field a team that remained a serious contender through mid-November.

2017’s November schedule looks to be a daunting task once again, with the likes of Auburn, Ole Miss, New Mexico, and LSU awaiting them.

How he can save his job: Besides the obvious ‘win’, Sumlin and company need to be in contention for the SEC West come the end of the year. They need to finish the year as a top-10 squad and find their way to a NY6 bowl game. Anything less and Sumlin gets the boot.

On paper, the Volunteers did seem to be improving each year under Butch Jones. The first two years under Jones, they went 5-7 and 7-6 respectively, but are now coming off two straight 9-4 seasons.

One of the biggest issues with Butch Jones that should scare Tennessee fans and boosters is what he says off the field. In the age of social media, memes, and instant video, saying corny things like ‘champions of life’ and ‘five-star hearts’ is a quick way to lose talented recruits.

Jones has been absolutely shamed on the internet for saying things like these, and they keep coming. Every time he opens his mouth he seems to say something else that belongs in a children’s book.

At yesterday’s SEC Spring Meetings, he said that “the first element that goes into winning championships is contending to win championships on a consistent basis, and our program has done that.”

In 2015, they’d already lost three games by the second week of October. In 2016, they skated by (by the skin of their teeth, i.e. Georgia) their September slate, then dropped three-straight games before November had even hit.

It’s hard to contend for a championship if you’ve lost that many games in just two months, and it’s especially hard to contend if you can not even win your own division despite it being one of the weakest in existence.

How he can save his job: Should they find a way to beat Alabama, another 9-4 season would be accepted. With most of their team from last year no longer in Rocky Top, however, that’s highly unlikely. They’ll need to be in the SEC Championship game in early December for Butch Jones to avoid the ax.

Biases aside, Gus Malzahn is probably the worst of the three coaches. Not only has he shown absolutely no improvement in three straight years, he all but blamed it on his long time offensive coordinator by replacing him.

Since the miracle 12-2 season of 2013 that ended in a National Championship loss, they have gone 8-5, 7-6, and 8-5, respectively. They have not beaten Alabama since the infamous ‘Kick Six’, and haven’t beaten Georgia since the ‘Miracle at Jordan-Hare’ in that same season.

Think of Gus Malzahn as an artist that releases a good song on his first album, and the song is played on radios all over the world. Eventually, the song climbs all the way up to the top of the charts and billboards, but never wins him a Grammy.

We call those One Hit Wonders.

Gus Malzahn’s smash-hit has come and gone. From here on out, it’s all below-average work.

How he can save his job: Obviously, he needs more than seven or eight wins. More so, he needs to beat his rivals. Tigers’ fans can not possibly be happy with losing to both Georgia and Alabama for three straight years. If they fail to beat them both again this year, what possibly allures the boosters and decision makers to keep him?

Disagree? Let us know in the comments section below!

J.A. Weaver is a lead writer for TD Alabama Magazine and Bama Hoops Hype. You can contact him via phone at 205-612-5060, or on Twitter @JWeaver_TDALMag