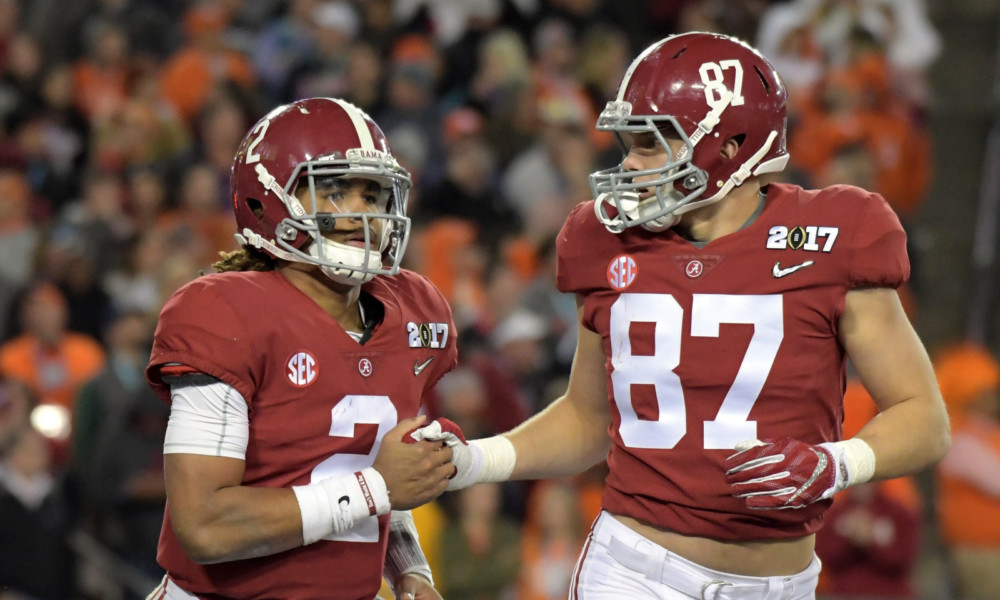 He never totaled 1,000 yards receiving in a season. He never recorded at least 20 receptions per year, unless you count his junior and senior campaigns. He was a forgotten member of Alabama’s offense, to the point where head coach Nick Saban apologized to him after seeing him blow up in the 2016 College Football Playoff National Championship, yet and still – O.J. Howard never complained. He remained patient and now he’s at the professional level.

Irv Smith Jr., has been the talk of summer camp as the breakout star at tight end and heir to Howard’s throne for next season. Coming from an NFL pedigree, Smith’s father – Irv Smith, Sr. — played for the New Orleans Saints. His son would be highly regarded as a four-star prospect upon enrolling in the Crimson Tide’s 2016 recruiting class. Hailing from New Orleans, La., Smith played in nine games but didn’t record any statistics.

He brought in 31 passes for 558 receiving yards and four touchdowns, during his senior year (2015) at Brother Martin High School. While both he and Hale Hentges (junior) bring a lot to the table, others state that another individual is set to have a major season at tight end under offensive coordinator Brian Daboll.

“Hale Hentges and Irv Smith are both talented, underrated guys,” former Alabama quarterback Josh Palet said in an interview with yours truly. “Smith is a basketball athlete with big hands that can get open, but Miller Forristall is the elite tight end.”

Forristall, a native of Cartersville, Ga., signed in the same class as Smith. He turned in a better output as a freshman, hauling in five catches for 73 yards. The 6-foot-5, 238-pounder was on the receiving end of a few crucial passes from quarterback Jalen Hurts, including a 22-yard reception versus Louisiana State University at Tigers Stadium that helped set up Hurts’ 21-yard touchdown run at the start of the fourth quarter.

“Miller Forristall was open more times than anyone else last season,” Palet said.

“And the funny part was when the offense watched film with Coach Kiffin after games, everyone would count how many times Miller was open versus O.J. Howard, ArDarius Stewart and Calvin Ridley.”

He garnered three stars to his name in the 2016 recruiting cycle, but Forristall’s talent in both receiving and blocking is unmatched. He chimed in with 57 receptions for 902 yards and 11 touchdowns as a senior, and chose the Tide over California, Mississippi State and Miami (Fla.). It won’t ever be shown in the stats column; nevertheless, Forristall was credited with one of the biggest plays for Alabama in its run toward a national title.

He secured a block on the edge for Hurts against Clemson, aiding his quarterback to a 30-yard touchdown run late in the fourth quarter. His efforts assisted the Tide to a 31-28 lead and if the defense would have forced a three-and-out, Alabama ends the game with its second championship of the playoff era.

“He’s a great blocker and an underrated route runner,” Palet said. “He’s not the fastest or strongest guy, but Miller just finds different ways to get open and create separation.”

The former walk-on describes Forristall as being “deceptively fast.”

“He a catching machine,” Palet said. “If Jalen Hurts takes his time next season in the pocket, he will see Miller open downfield and should be able to get him the ball. Dude is just special.”

Brian Daboll has performed wonders with tight ends in the past.

As an assistant under Bill Belichick at New England, he mentored Rob Gronkowski, Martellus Bennet and Aaron Hernandez (now deceased) into being productive players in both run and pass game.