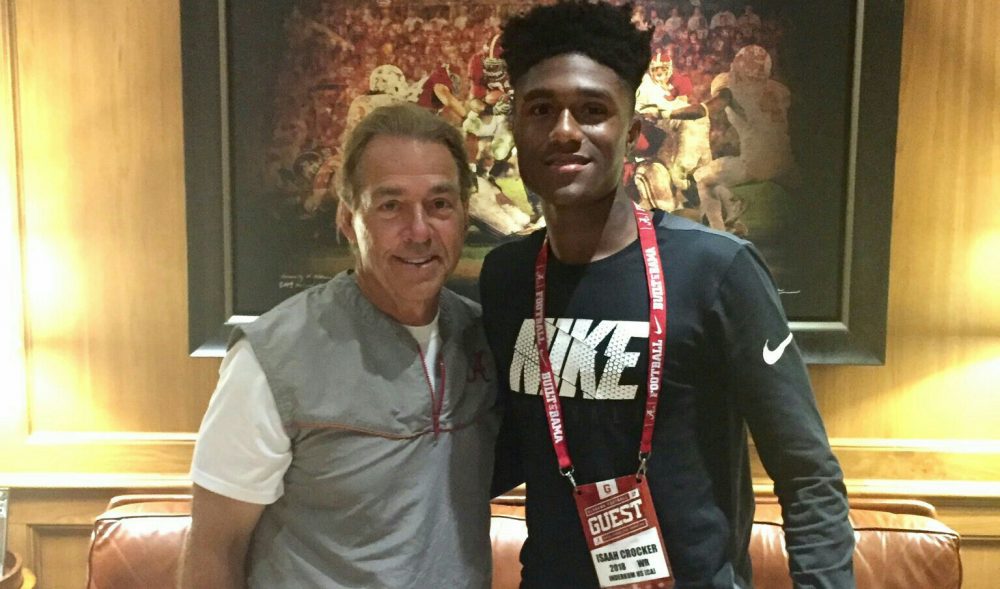 A few more guys stood out at Nick Saban Football Camp this week and are walking away with offers. Here are some of the players that now have a chance to be a part of Alabama’s historic dynasty.

Jeremiah Martin received an offer from Alabama on today. He is a weak side defensive end in the 2018 recruiting class. According to most recruiting outlets, he is a 4-star recruit. The 6’6″ 245-pounder is a monster who opposes his will on offensive players.

Garrett Shrader also received an offer from Alabama. Shrader is a pro-style quarterback in the 2019 recruiting class. He is an elite quarterback with great accuracy. He is also very mobile making it very hard for opposing defenders.

Beyond blessed to have received an offer from the University of Alabama! #RollTide pic.twitter.com/TNK1CGLuNg

Riley Simonds, a tackle in the 2019 recruiting class, shared his excitement for the offer he received from Alabama. The junior is already 6’4″ and weighs 304 pounds. He is going to be a great tackle on the next level. Some prestigious schools are in the mix for him.

Blessed to say I have received an offer from Alabama @BufordProspects @AlabamaFTBL pic.twitter.com/XpOduvpAG7

Sav’ell Smalls shared his appreciation for Alabama’s offers via Twitter. Smalls is an outside linebacker in the 2020 recruiting class. He is 6’4″ and weighs 225 pounds. He is an aggressive rusher that strives to put pressure on the quarterback on every snap. His style of play is very similar to former Tide linebacker Tim Williams.

Work hard and good things will come. Put down for the 206, and I'm coming back home with an offer from the University of Alabama. #RollTide🌊 pic.twitter.com/g0qosmhoao

Isaah Crocker was shocked to received an offer from Alabama. He is a wide receiver in the 2018 recruiting class. He garners a 4-star rating by most recruiting outlets. Alabama has become a major player in this guys recruiting process.

HUMBLE, SHOCKED, and yet BLESSED to receive a FULL Ride scholarship to THE UNIVERSITY OF ALABAMA‼️🐘🏈 #RollTide🅰️ #RTR🌊 pic.twitter.com/EElEPq031Q

The No. 1 running back in the 2019 recruiting class, Quavaris Crouch, got an offer from Alabama.  He is a 5-star recruit. This guy is one of those old school down hill runners. He could excel on an Alabama offense they loves to pound the ball.

I thank God for it all I'm so humble and thankful for the opportunity that he blessed me with couldn't have done it without him #God1st pic.twitter.com/DWUaFed0mb