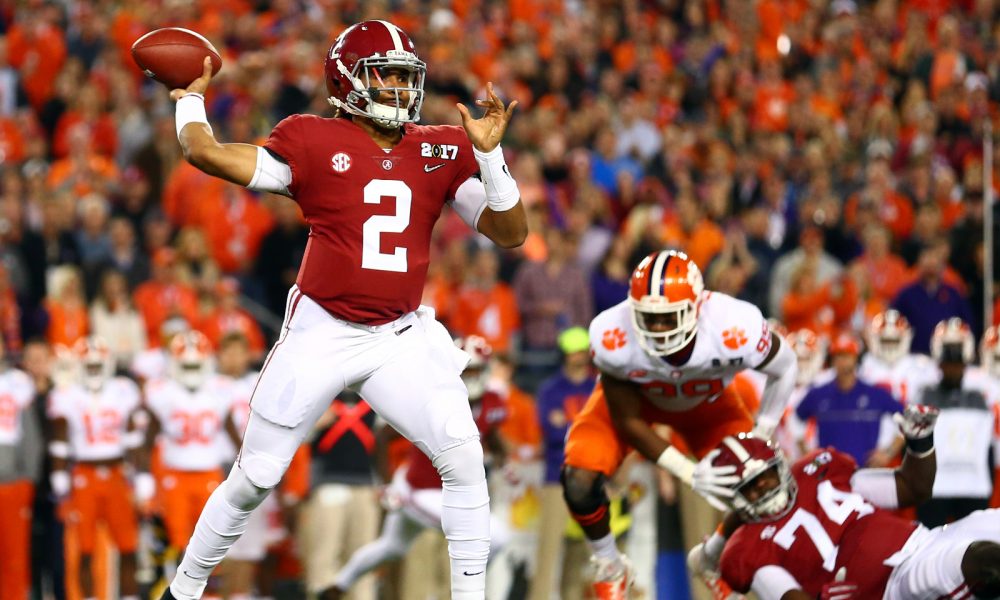 As head coach of the University of Alabama football program, Nick Saban refuses to put a high amount of pressure on first-year starting quarterbacks. From Greg McElroy to Jacob Coker, his message for signal callers has been to manage the game.

Regardless of inconsistent numbers as a passer down the stretch (and he knows it must improve), Jalen Hurts kept the Crimson Tide in position to win through 15 matchups a season ago. Now a sophomore, he knows what to expect.

Having a completion percentage of 42 percent – 13 for 31 – is never good in a championship game, but a 30-yard run in the fourth quarter had Tide fans believing that Hurts delivered the school its second national title of the College Football Playoff era. He earned the elation of the crowd, hugs from teammates and a marquee score during a pivotal moment; however, the fleeting images of Hurts was him watching another quarterback leave with the hardware.

After frustrating Deshaun Watson early on, Alabama’s defense had no answers for him and his supporting cast as Clemson marched downfield for the game’s final score. Whether it’s in dormitories, the player’s facility or the Mal Moore Athletic facility, small reminders have been placed in letting the Tide know a potential championship eluded the team. While Saban, Calvin Ridley, Bradley Bozeman and Minkah Fitzpatrick displayed their motives at Southeastern Conference media days, Hurts has been in Tuscaloosa – working on more than passing mechanics.

“He’s becoming a bigger leader on the team,” Bradley Bozeman said on Hurts during his interview portion at SEC media days. “He’s more vocal now. He’s not overly emotional because his facial expression stays the same, but he’s becoming the inspiration that pushes the team.”

Pieces of that inspiration showed in the Tide’s 2016 season opener versus the University of Southern California, but two special moments came in games against Ole Miss and LSU. When it trailed 24-3 in the first half, Hurts did not allow Alabama to panic at Vaught-Hemingway Stadium in Oxford, Miss. He shook off a monster hit from defensive end Marquis Haynes, rallied the team around him, and led a scoring drive that started a 48-43 comeback win.

Tigers’ defensive coordinator Dave Aranda drew up a genius plan for LSU’s meeting with Hurts and the Crimson Tide in November. A defensive stalemate went on for three quarters, until Alabama allowed Hurts to make some plays that only he could generate. After rolling to his right, the native Texan would escape a marquee linebacker in Kendell Beckwith for a 21-yard touchdown run in the fourth quarter. His 114 rushing yards on 20 carries did more than silence a boisterous crowd at Tiger Stadium; it also added more to the notion that nothing rattles Hurts.

“From the day Jalen first started at quarterback, he’s always been a leader,” Alabama wide receiver Calvin Ridley said during interviews at SEC media days. “He’s always been one of the captains on this team. His leadership has been really good.”

Behind Hurts, the Tide captured a 10-0 win over the Tigers and would go on to win its third consecutive SEC championship. Despite the signings of Tua Tagovailoa and Mac Jones in the 2017 recruiting class, Saban and offensive coordinator Brian Daboll are both on the same page in wanting to develop Hurts as a passer. He completed 62.8 percent of his throws; nevertheless, the majority of his connections came on shovel passes and short routes.

“The players have really responded to him well. He’s got a great personality. I think he’s exactly what we’re looking for in terms of helping us redevelop a pro-style passing attack that would go with the athleticism with some of the spread offense that we’ve used with Jalen and our other quarterbacks, which helped us tremendously, I think.”

Love him or hate him, Lane Kiffin did a lot for Alabama’s offense.

The lone thing he did not do was fully develop Hurts’ arm talent, which is what Daboll intends to do in the upcoming season. Per another source, the vibe around campus states the sophomore understands more about his role.

“The team has bought into Jalen even more,” sources said.

“He had to learn some of his leadership on the fly last season, which made him nervous in some games. He’s definitely grown and matured more this offseason. Guys really respect him and feel like they can come to him.”

His demeanor is calm and his facial expression does not change. Currently, Hurts has been named to multiple preseason award watch lists — including Maxwell, Davey O’Brien and Walter Camp.

He will carry his leadership and Alabama football into its season opener versus Florida State in new Mercedes-Benz Stadium on Saturday, Sept. 2, as the Crimson Tide looks to avenge itself and hoist the CFP Trophy again.