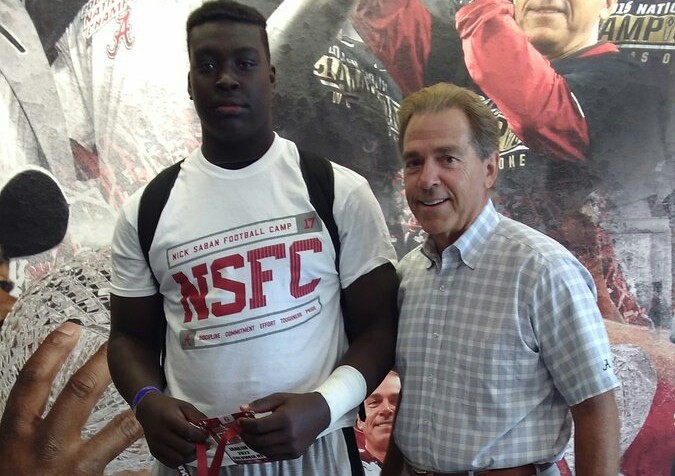 The college football game has evolved a lot over the last couple of years. High School players are being targeted as early as possible. This has lead to many athletes receiving offers as early as 7th grade. Alabama has taken a leap of faith and offered a rising 8th grader.

Alabama offered Jaheim Oatis on Friday. He shared his excitement for the offer via Twitter. Ole Miss and Mississippi State also offered him.

This guy is huge. He currently stands at 6’4″ and weighs 286 pounds. His size played a huge part in this guy receiving an offer. Nick Saban couldn’t believe he was an 8th grader according to Tweet from Oatis.

One of my dreams came true…. He couldnt believe I was going to the 8th grade….. pic.twitter.com/ZX8qrvNRAX

Oatis has a lot of potential. He is a 3 sport athlete. The talented 8th grader currently plays basketball, baseball and football.

A commit from this guy should not be expected anytime soon. There is going to be a huge amount of schools that will offer him over the next couple of years. Alabama’s early offer could have helped them put their foot in the door. He did refer to their offer as a dream come true.

Nick Saban’s Football Camps has always been a huge gathering of extraordinary talent. Athletes come from far and wide to showcase their talent in front of Alabama’s coaching staff in hope of an offer. Many achieved that goal, but many extremely talented ones do not. This furthermore makes Oatis receiving an offer even more special. He could be a huge name in the future. It is going to be interesting to see how his recruiting turns out.