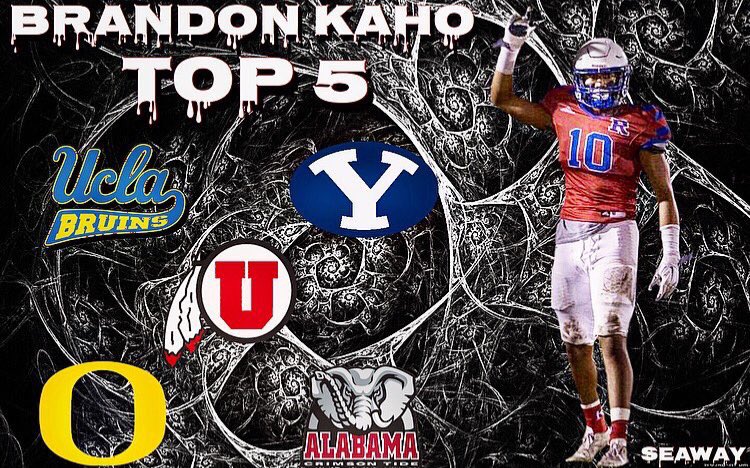 Brandon Kaho announced his top 5 via Twitter on Monday.

Oregon, Utah, Utah State and BYU were also include, making Alabama the only SEC school.

Kaho is an inside linebacker in the 2018 recruiting class. He is a 4-Star recruit according to most recruiting outlets. The Nevada native is ranked as the No.4 player in the state of Nevada according to 247 Sports.

The 6’2″ 232-pounder is very mobile. He is able to play sideline to sideline and is an excellent tackler. Kaho already posses prototypical size for an SEC linebacker.

This guy is a complete athlete. He could honestly play on the offensive side of the ball at the next level. On film, he is seen lining up in the backfield on many occasions and being a very effective option in the run game.

Alabama offered Brandon after he attended camp on July 17.

Honored to receive an offer from the university of Alabama‼️🐘#RollTide #GloryToGod #775 pic.twitter.com/KSv5JCsqB8

The fact that Alabama was able to send him an official offer on today could effect  his decision.

Alabama has already landed 4-Star linebacker Quay Walker. Walker is an hybrid linebacker that is also very mobile. They both could become a great duo in Tuscaloosa if Kaho commits to Alabama.

There are many players that Alabama are in the mix for at the moment. Despite a slow start to recruiting, things  are starting to heat up in Alabama recruiting. Tide fans should be very excited and should hold on, things could get interesting.