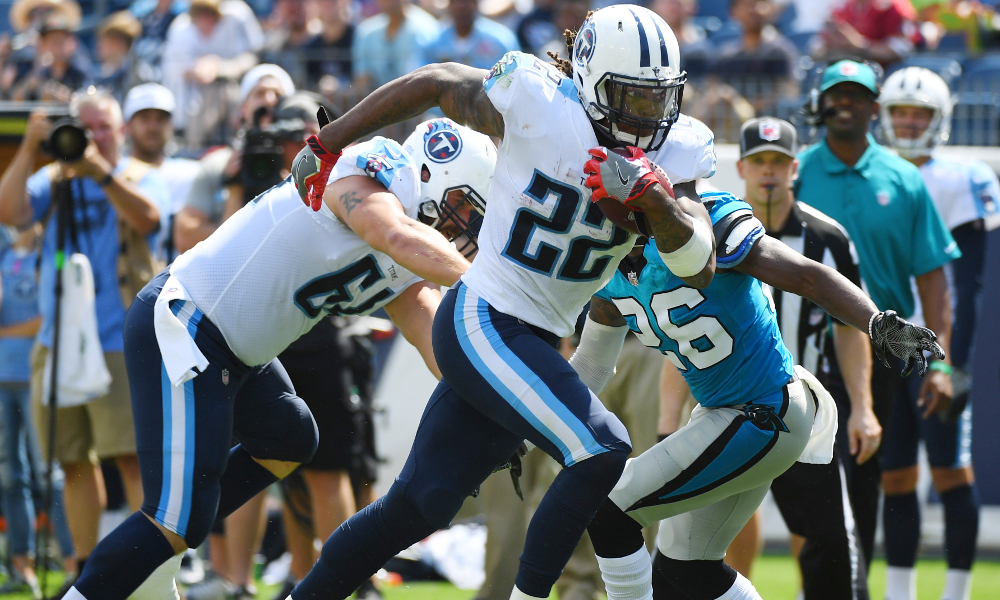 After going early in the second round of the 2016 NFL Draft, Derrick Henry saw carries as a back up to DeMarco Murray in Tennessee. On 110 rushing attempts – a third of the opportunities given to Murray – Henry managed 490 yards and five scores. At 6-3, 245 pounds, Henry is a hulking physical specimen with the speed of a six-footer.

The NFL’s preseason has entered week two, and Saturday’s slate of games was kicked off with a game between the Tennessee Titans and the Carolina Panthers. Henry’s Titans got off to a fast start, putting up 24 points in the first half alone. 14 of those points came by way of the Heisman Trophy winner.

On the first score of the day, a 17-yard-run, he takes the handoff, pulls left, uses a stiff arm to bounce it to the outside, then splits the defenders at full speed:

I love Derrick Henry so much he's so good man look at that stiff arm pic.twitter.com/q80Dui5Xwv

On the second score of the day, former Alabama Swiss-army-knife fullback, Jalston Fowler, lead the way for a one-yard, untouched dash into the endzone. This came on a fourth-and-goal:

On the day, Henry carried the ball 16 times for 36 yards and the two scores. He showed off his impressive speed and continued to grow the hype surrounding him. DeMarco Murray will continue to get the bulk of the carries in Nashville, but it looks like the Titans need to get Derrick Henry a lot more touches in 2017.

Jake Weaver is a lead writer for TD Alabama Magazine and Bama Hoops Hype. You can contact him via phone at 205-612-5060 or on Twitter @JWeaver_TDALMag