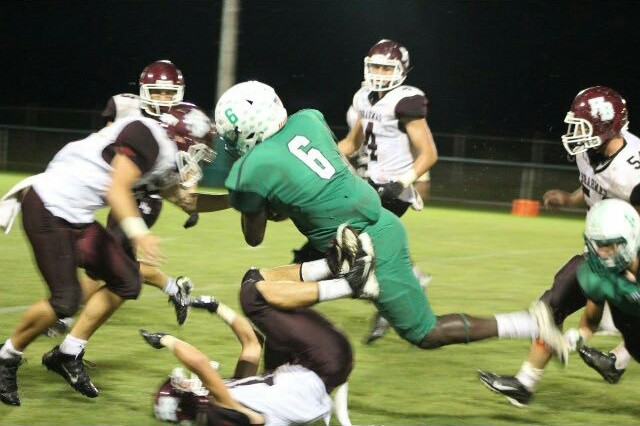 Alabama has landed one of the top athletes in the 2018 recruiting class. Vernon Jackson committed to The Crimson Tide on today.

Jackson was set to announce his decision in August, but the threat of Hurricane Harvey forced him to push his decision back.

The Texas native is a 3-Star recruit according to most recruiting outlets. The 6’3″ 260-pounder is listed as an athlete. He currently lines up at quarterback and strong-side defensive end for Boiling High School in Boiling, Texas.

This guy has an incredible amount of speed for a guy his size. He is arguably one of the most versatile players in this very talented class. The Tide can use this guy in so many ways in the future.

It will be interesting to see where this guy will line up at when he comes to Tuscaloosa and puts on the crimson and white.

The Crimson Tide’s coaching staff has to be excited with this grab. Jackson is a special talent that can bring excitement to The Tide’s offense or defense.

With 0:05 left in the half was so close ? pic.twitter.com/K6fJza1zPs

Alabama recruiting class now stands at 11 players. Jackson is The Tide’s third 3-Star recruit. The rest of their 2018 recruiting class are 4-Stars. It is still so much talent on the board for The Tide to grab. Stay tuned into Touchdown Alabama Magazine for updates.