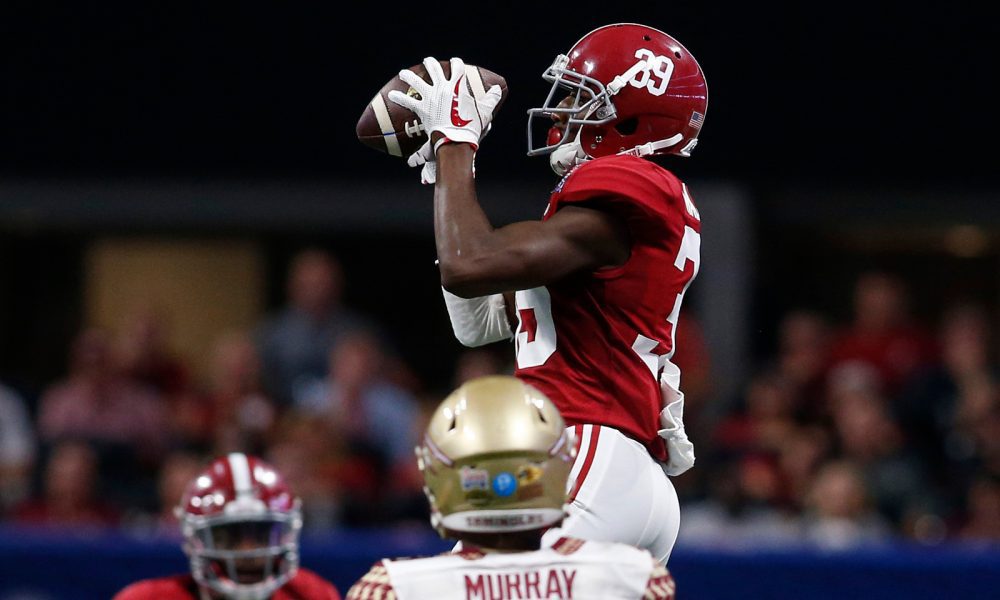 Alabama is a place where fairy tale endings really do happen. It’s happening again now and that what makes Alabama a hard team to beat.

This is What Makes Alabama a Hard Team To Beat

Alabama is a team where four and five star athletes fill the bench on gameday because there’s just much talent there from all of Nick Saban’s number one recruiting classes. It’s hard to imagine a tougher place for any athlete to see playing time on offense or defense. This is the field of dreams, where the best of the best come to compete, where no team has more players active in the NFL. Only the best need apply here.

But in any field of dreams, there’s always someone who beats the odds, who dreams bigger than the team he’s playing for and achieves what most would consider is impossible. Just like a fairy tale where the skinny King to be pulled the sword from the stone that no strong knight could budge, Alabama develops men from boys who become greater than most ever saw them becoming.

In Saban’s early years, a young boy came to Alabama and walked on the team. No big school offered him a scholarship and he wasn’t even a one star recruit, but when he showed up all he asked for was a uniform and a chance. He told the coaches that not only would he make the team, he would become a starter and one day become the team captain. His name was Rashad Johnson.

And not only did all that come true, but he became a early NFL pick and today is a millionaire and a respected professional athlete as a defensive back.

Maybe it was easier then, the stable wasn’t as stocked in the early days of the Saban era, surely naysayers will make all kinds of excuses, but sometimes folks are just attracted to Alabama because they want to push themselves harder than they would elsewhere, to go for the dream and fight the good fight. But they say in today’s world with the talent at Alabama that couldn’t happen again.

Well don’t tell that to Alabama’s new starting cornerback Levi Wallace. As a senior in high school he begged colleges for a chance to come and let him prove what he could do. Here’s what he wrote in an open letter to all colleges including all the misspellings.

Hello My name is Levi Wallace and I am from Tucson Arizona. I am a senior this year and I am very interested in playing football at the next level. I play cornerback and reciever and I excell at both postions but id rather play corner. I am really aggressive when playing press but I can also play off and play coverage. I have really good footwork to help me stay infront of recievers and really good speed.. I played club last year for Tucson Showtime and we went to vegas. I was interviewed by fox sports as a lock down corner.I have been playing since I was 6 years old. I understand football really well from inside out. I have the potential to cover any reciever i believe with the right coaching. My email is ****************@gmail.com and my number is **********. Thanks again. Sincerely Levi

But his plea to be courted by colleges as a scholarship athlete seemed to go unheard. So instead of settling for playing for some small school, against all odds he came to Alabama almost all the way across the country and walked on a team of champions and cast his lot.

He didn’t see playing time until his junior year and that was the year Alabama finally awarded him a full scholarship. That season he saw a good bit of action on special teams but also got some relief duty playing corner. Once he was given the chance, coaches knew they did the right thing in letting this young man on the field.

This year, his senior season, he now has secured a starting position and the boy from Tuscon that nobody wanted is leading the SEC with five pass break ups, tied for the lead in successful passes defended and already has one interception to go along with his eight tackles including one for a loss. He is a star on the best team in the nation, he is on the field getting NFL scouts attention and while he does that, folks that ranking services gave more stars too, who fielded multiple offers from lots of big schools are on the bench watching him.

Yes, Saban fills the shelves with highly ranked stars and that helps them win many of the championships they do. But what makes this team Alabama are the guys like Levi Wallace, who don’t come with all those credentials but come with a dream. They are the men who make great men better, who push those who think they had it all and make the guy on fourth string believe that he too can make it if he just pushes himself far enough.