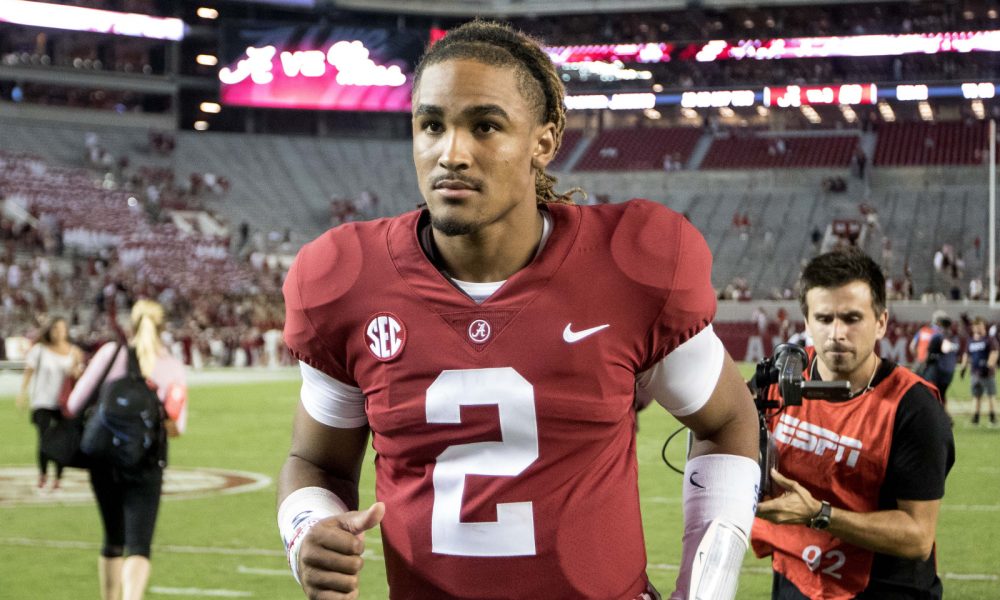 Whether it’s a full game or one half, Jalen Hurts has been stellar.

With him under center, Alabama’s offensive coordinator Brian Daboll has witnessed his group outscore opponents 118-16 in the first half through the last four games – including a 73-6 domination in opening quarters.

He may not be a trailblazer in the passing game just yet, but Hurts’ effectiveness overall is second to none. Despite some early nerves versus Mississippi last week at home, the sophomore turned in a savvy performance both passing and running the ball.

Nine different receivers caught at least one pass from Hurts, as he connected on 12 of 19 attempts (63.2 percent) for 197 yards with two touchdowns. Going back to last year’s meeting versus Ole Miss at Vaught-Hemingway Stadium, this was seventh time in Hurts’ career where he thrown and rushed for 100-plus yards in a game. In donning a wrist band on his hand to support a young girl that’s battling a brain tumor, he led the Tide in rushing with 101 yards on 10 carries.

Hurts turned in his fourth rushing score of the season and 17th of his career on a 10-yard run in the second quarter, to give Alabama a 35-3 edge. His 298 yards offensively, which counted for nearly 50 percent of the team’s production, navigated Saban’s unit to 66 points; the most-ever under his regime.

To put more things into perspective, he’s only halfway through his second year as a starting quarterback and yet Hurts continues to advance in the record books. He’s now fifth all-time in school history for career touchdowns, surpassing Brodie Croyle (2002-05) with 46 scores.

Through four games, he’s completed 66.2 percent of his throws while accounting for 1,057 yards offensively with nine touchdowns. This week will serve as homecoming for Hurts as he guides into Kyle Field at College Station, Texas to face head coach Kevin Sumlin and Texas A&M.