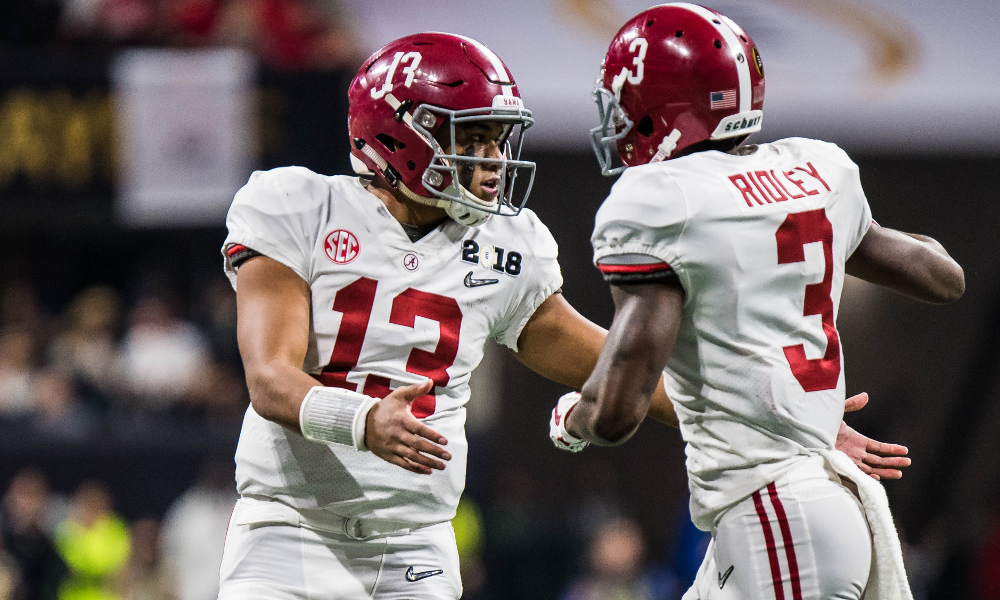 Unfortunately for Calvin Ridley, he spent the better part of his three-year college career in a ground-oriented offense with an option-style quarterback under center. He was by far the most prolific receiver the team had during his time in Tuscaloosa, however, and will surely go down as an Alabama legend. That said, his numbers saw a sharp decline after a stellar true freshman campaign – something that will ultimately hurt him in this season’s draft.

He recorded 2,781 yards and 19 touchdowns on 224 catches with the Tide. Last season, Ridley recorded 967 yards alone, while the next highest receiving total was just 264 yards by Jerry Jeudy. Now widely expected to be a top-15 pick next month, Saban and company will need another star to rise up.

Fortunately for them, it appears there is to be a new sheriff in town under center by the name of Tua Tagovailoa.

After coming in during the second half of the National Championship game, Tagovailoa threw to every receiver at his disposal. A list that includes Calvin Ridley, Jerry Jeudy, Cam Sims, Robert Foster, Hale Hentges, Henry Ruggs, DeVonta Smith, and more. Jalen Hurts, whom he replaced, went an abysmal 3-of-8 in the first half of the game, while Tua managed an impressive 14-for-24 for 166 yards and three touchdowns.

This, of course, is not to say Hurts was an awful quarterback, in fact he was exactly what the Tide needed during most of his career. However, as he become less and less trusting in his own arm, so did defenses, and stacking the box became nearly inconsequential. With Tagovailoa at quarterback next season, it appears that Ridley will not need a sole successor. Instead, for the first time in a Nick Saban offense, they may have the firepower to succeed on the shoulder of not one, but a group of talented receivers.

Jerry Jeudy, DeVonta Smith, and Henry Ruggs are the three most obvious choices to head this attack. As true freshmen, the trio accounted for 653 yards and 11 touchdowns, a more-than-significant part of Alabama’s 2017 offense.

Other names to keep an eye on, however, are those of two redshirt freshmen: 6’6″, Tyrell Shavers, and a top athlete of the 2017 class in Chadarius Townsend. Both would give the Tide’s receiving corps a physical edge they do not currently have. Shavers, with his size, and Townsend with his bulk, could both provide some of the ArDarius Stewart/Julio Jones style of strong play on the outside.

Incumbent freshmen could also end up playing a role come Fall, but it is hard to pinpoint those who could be the most successful until we see them in Spring practice. Regardless, if everything falls into place the way it appears to be doing, Coach Saban will not need one superstar to step up in Ridley’s absence during 2018. Though nearly the entire receiving group would be compiled of sophomores, they all do come equipped with invaluable experience.

Next year’s offense could be the best that Nick Saban has ever had in his entire coaching career.