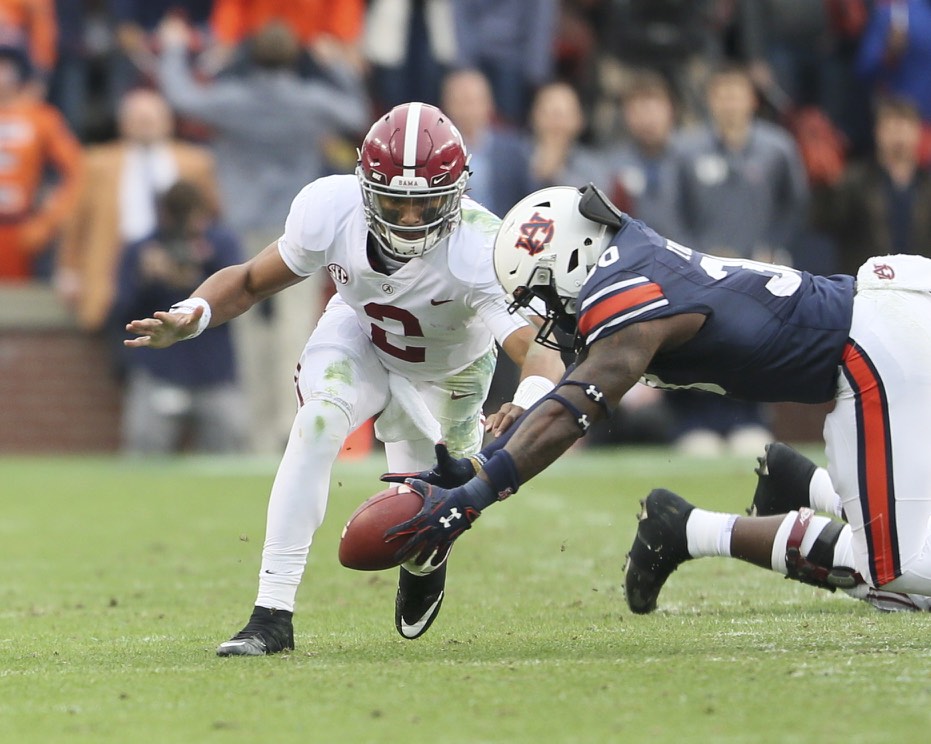 While no one can say with certainty what would have happened had Alabama made a quarterback switch in the Auburn game, it would appear that Tua could have pulled that game out if given the chance.

Would Bama Have Defeated Auburn Last Year if Tua Had Quarterbacked?

First of all, the definitive answer is, no one knows. It’s purely speculative. But it’s still a question worth examining and this is what we’ll do over the next few paragraphs.

Certainly when you look at Auburn’s defense, comparing them to Georgia’s is a fair comparison. Jalen Hurts’ struggles with the Georgia defense is well documented, but Tua Tagovailoa seemed to have far less trouble with it than did Hurts.

So would Tua’s magic have saved the Tide against Auburn this past season? Well let’s take a look.

Hurts ended his time against Auburn 12 points short. He completed 12 of 22 passes for just 112 yards with his average pass going just five yards. His 54% completion ratio wasn’t anything special. Where he did shine was rushing for 82 yards averaging just 4.2 yards a carry.

Now let’s be fair, this was against a very hostile crowd in Auburn’s home stadium and Alabama’s defense had trouble stopping the Tigers as well.

However let’s also be fair in that the Georgia game was played in an also mostly hostile crowd in the new Georgia Dome. In that game, Hurts was 3 for 8 with his average pass going for just 2.6 yards per carry and a miserable 37% completion ratio and just 21 total yards in his only half of play. Against that same crowd and team in the second half, Tua went 14 of 24 for a 58% completion ratio, 21% higher than Hurts, averaged 6.9 yards per pass, more than double Hurts average and a total of 166 yards total with three touchdown passes to Hurts zero scoring drives.

Like Jalen, Tua did make some plays with his legs as well rushing for just 20 yards less than the slippery Hurts. But it was the total yardage that Tua piled up that Hurts just couldn’t do that would make one believe that should Tagovailoa have played the entire Auburn game that he could have mustered up enough offense to propel the Tide past the Tigers on that November game.

Against Georgia, Hurts could not get the Tide into the endzone and no points were scored in his first half. However in his half Tua rallied the Tide for 26 points and that was the same total that Auburn was able to muster for four quarters, not two. Again, this would seem to indicate that Tua could have put more than enough points on the board to overcome Auburn.

Against Auburn, the passing game was anemic and Auburn sold out to stop the run. As such, the running game suffered. With Tua making a downfield threat, he could have made them pay for stacking the line and playing the run.

Then again, this is all subjective and nothing is certain.

But had Tua played the entire Georgia game and had the same success in the first half as the second, Tua could’ve led Alabama to 40 points against the nation’s number two team and again, one with a defense that compares to Auburn’s pretty close. Even if he just led Alabama to 75% of that total against Auburn, those 30 points would have been enough to win that game.

But since Tua didn’t play in that game, we will never know for sure. But if you were a betting man and you could go back in time and replay that game with the same players at the same place save one quarterback change, how would you bet?

I know how I would bet. I’d be interested in your opinion in the comments below.

Alabama QB Jalen Hurts honors bet with Charles Barkley, spurns Auburn in process
Who is Best Suited to Replace Calvin Ridley’s Production in 2018?
To Top
%d bloggers like this: