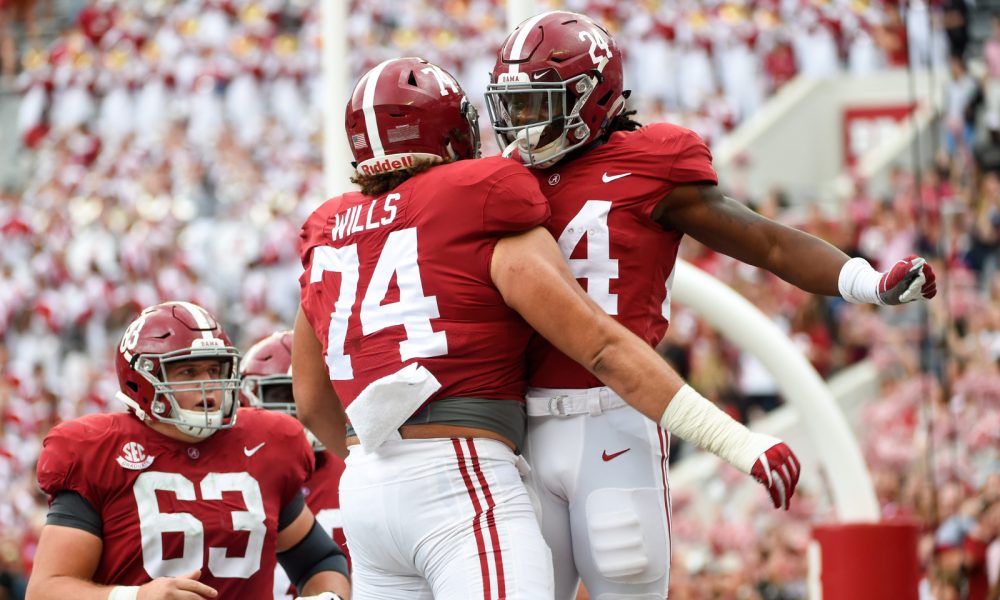 Regardless of unfriendly weather conditions– cloudy, 69 degrees – the University of Alabama football program and head coach Nick Saban are at Bryant-Denny Stadium for its first scrimmage of the spring semester. One final exhibition will follow this matchup, before the team has its A-Day game on Saturday, April 21 at 1:00 pm CT.

During the first week of practice, Saban listed off quite a few players – including offensive linemen Matt Womack (foot) and Kendall Randolph (achillies), running back Josh Jacobs (ankle), linebacker Anfernee Jennings (knee) and safety Keaton Anderson (shoulder) — that will miss the entire spring. Following a knee surgery to wide receiver Jerry Jeudy (meniscus), there is not a timetable for his return and cornerback Trevon Diggs is dealing with an ankle issue.

With so many guys out, a lot of young players will get an opportunity to impress the coaching staff and yours truly of Touchdown Alabama Magazine has notes from warm-ups.

-Tua Tagovailoa (finger) was present and practicing during the media viewing period. Despite being limited, he along with Jalen Hurts split reps with the first group of receivers. Mac Jones threw to the second group. Walk-ons Kyle Edwards (No. 16) and Chris Howard (No. 18) were behind them.

-Both Hurts and Jones displayed touch and accuracy on some deep passes, as well as short to intermediate routes.

-Hurts and Jones will more than likely get all first team reps, if Tagovailoa does not compete in practice.

-Miller Forristall, who missed the majority of last season with a knee injury, took part in blocking drills while sporting a black, non-contact uniform. He was granted a medical redshirt after sustaining the injury and is set to return in the fall as a redshirt sophomore.

-The rotation in pass-catching drills for tight ends went as follows: Hale Hentges, Irv Smith Jr, Miller Forristall, Kedrick James and Major Tennison. Both Hentges and Smith reeled in good passes from Tagovailoa and Jalen Hurts within the first minutes of the viewing period.

-Although the rotation from left to right has been Jonah Williams, Joshua Casher, Ross Pierschbacher, Lester Cotton and Jedrick Wills through three weeks, today’s lineup was altered.

-Williams and Pierschbacher remain at left tackle and center, however, Alex Leatherwood took snaps at right tackle and Wills slid in at right guard. Also, Cotton was position at left guard.

-Seeing how both Leatherwood and Wills were both highly-rated on the ESPN 300 recruiting network upon arriving at Tuscaloosa in 2017, the right side of Alabama’s offensive line could possibly set up as the power run side.

-Saivion Smith and Shyheim Carter were spotted at both cornerback position, as Trevon Diggs continues to rest his ankle. Deionte Thompson and Xavier McKinney, who have lined up at safety thus far throughout spring, were both at safety.

-Jared Mayden came in at corner in the nickel package, which caused for Carter to move to star in the latter portion of media viewing.