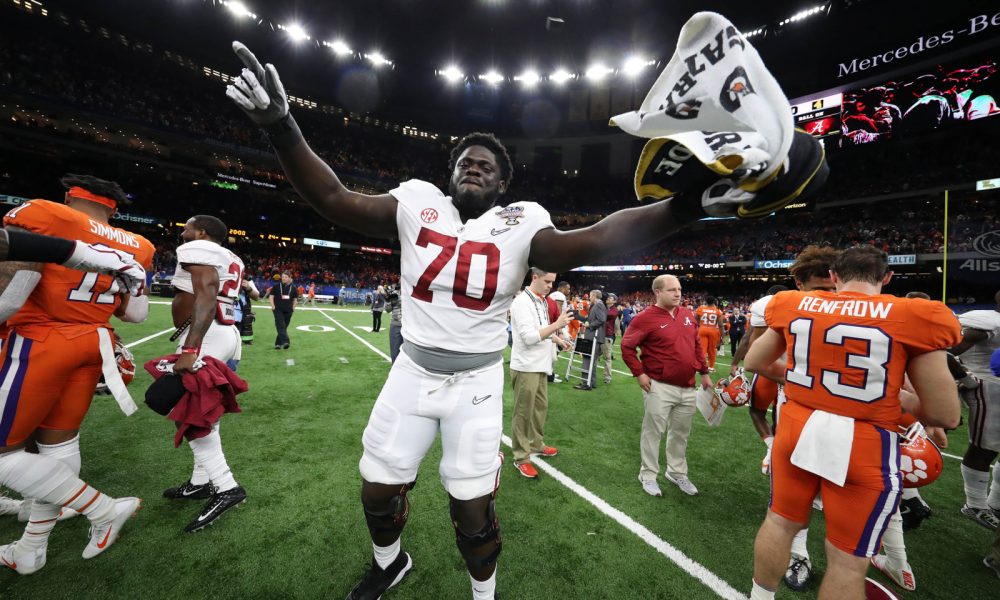 Alabama has depth, experience and talent returning to its offensive line in the upcoming fall and head coach Nick Saban would be first to say it.

While it averaged 37 points a game in the last three seasons under two main offensive coordinators – Lane Kiffin and Brian Daboll – the leadership on the roster has potential to deliver the Crimson Tide to more impressive stats.

Fans and media pundits alike became use to seeing the Tide’s defensive unit have its away throughout spring and fall practices and despite rumors of this being the case after the first scrimmage, Saban defended the big men on offense during Wednesday’s presser.

“I thought the offensive line did a pretty good job in the scrimmage,” Saban said.

“We moved the ball pretty well. Had a lot of passing situations where the defensive players got a chance to tee off on some guys and got a lot of pass rush things, so they got a little more pressure but we have great rushers. It’s good they challenged each other, but we made explosive plays on offense. We were not consistent as we liked to be in pass protection but were still pretty good.”

As Brent Key enters his third season at offensive line coach, he now has arguably the most versatile group he’s been around.

Redshirt senior Ross Pierschbacher, who has played in 42 games at left guard, has taken reps at center all spring. Josh Casher and Lester Cotton have both been rotated at left guard. Jonah Williams remains at left tackle, and the most intriguing thing is the insertion of sophomores Jedrick Wills and Alex Leatherwood at right guard and right tackle.

Upon being asked on the progress of both guys, Saban said the team is ‘confident in both.’

“Again, it’s a working progress when you move guys to new positions but we think both guys are really good players,” he said of Wills and Leatherwood. “We want to come out of spring with as much knowledge and diversity for both players and they have done a nice job all spring long.”

Along with him being comfortable in finding roles for Wills and Leatherwood, Saban is excited for the offensive line as a whole. He referred to it as the ‘strength’ of the team in the fall.

“I am encouraged about our offensive line,” he said. “We have a lot more experience, knowledge and leadership on offense right now and it starts with the offensive line.”

Prior to its spring game next week, the Tide will have its second scrimmage on Saturday.