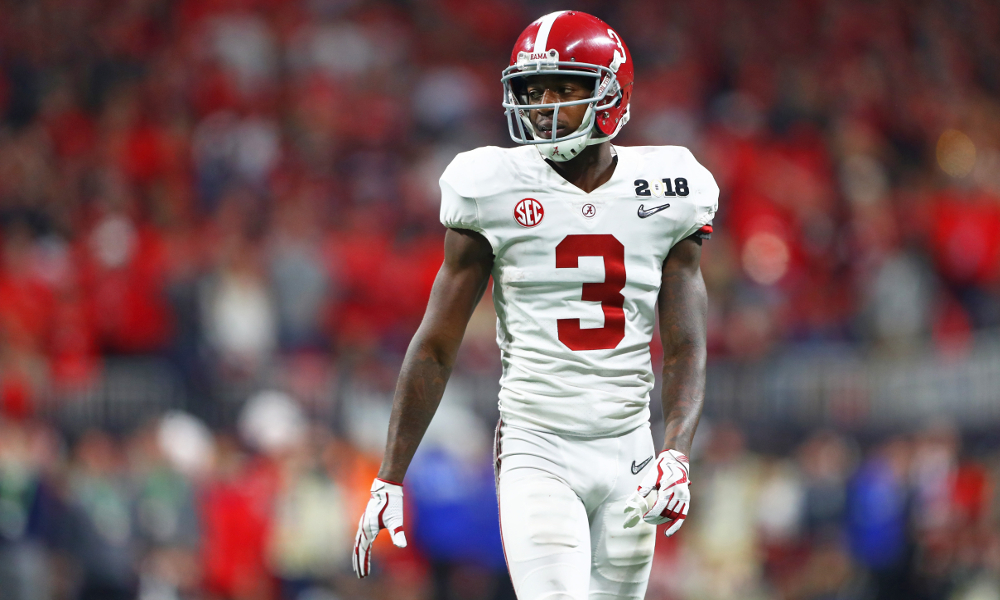 As is now tradition, Nick Saban’s Crimson Tide squad is prepped for yet another high-volume NFL Draft class. This year’s rendition includes a handful of potential first-rounders. Here is who I predict will head to the NFL on day one, and where I believe they will land:

Minkah Fitzpatrick to Tampa Bay at seven makes sense on paper, but the Bucs’ historical love-fest towards Florida State guys will see them pick Derwin James instead. Highly regarded as one of this year’s top-five non-quarterbacks, Fitzpatrick will be exactly what the Bears are looking for to bolster a defense in the midst of a rebuild. What he brings to the table, outside of elite covering skills, is versatility. He can play at safety or slot corner, and has even shown the ability to come down as an extra linebacker in the box. Alabama fans will also get a taste of nostalgia here, as their potential defensive backfield duo of Eddie Jackson – a surprise mid-round starter as a rookie – and Fitzpatrick will be a nostalgic one.

Considering the Bills do not trade up to snag one of the top quarterbacks, and Baker Mayfield does not happen to slip to them, the brass should look to shore up their offensive deficiencies elsewhere. The best way to do that is to add this year’s top receiver prospect in Calvin Ridley. The Bills have long been searching for a star receiver, and have spent many picks trying to find it. Few, however, have the ‘proof in the pudding’ as much as Ridley does with everything he has been able to put on tape. Though they were never teammates in Tuscaloosa, an A.J. McCarron-to-Calvin Ridley deep ball does have a special crimson ring to it.

Sean Lee is one of the NFL’s top linebackers – when healthy. He has missed a handful of games over the last few years with a slew of various injuries, meaning Jerry Jones and company should be on the lookout for a potential replacement for if and when he goes down again. Enter Rashaan Evans. Not only does Evans look like one of the draft’s most athletic linebackers, he has the ability to be as versatile as anyone, too. His well-documented speed allows him to be a menace from the outside, but his intangibles saw him excel as an inside guy in the latter half of his college career. A trio of Jaylon Smith, Rashaan Evans, and a healthy Sean Lee would see the Cowboys go from toting one of the league’s saddest defenses, to one with quite possibly the most athletic linebackers corps in the game.

The Falcons have needs on both sides of the ball, but with a starring cast of Julio Jones, Matt Ryan, and Devonte Freeman, the offensive needs are far from glaring. Grady Jarrett has quickly become an anchor of the Falcons’ young defense, but he needs help. Da’Ron Payne is a guy with star potential, and brings another man-eater to that defensive line. Payne’s hands were some of the strongest in all of college football last season, and his potential flashed the highest during the Tide’s final two games of the year. He was Alabama’s best run-stopper last season, and found himself in the opponents’ backfield more often than you’d think. Picking up Payne would give them a surefire run-stopper with potential to become an elite pass-rushing nose tackle. Certainly worth the risk.

Had the Steelers’ offense been able to stay on the field 100% of the time last season, they would have won a Super Bowl ring. Since the NFL requires defenses, they instead gave up 45 points to a Blake Bortles-led offense in a playoff game loss. There are a lot of guys the Steelers would like to pick up with their 28th pick, but many will fall off their boards as the night goes on. Ronnie Harrison may be a bit of a surprise pick late in the first round, but what he brings to the table makes it much more than a viable option. Harrison is the epitome of Steelers football: hard-nosed and physical. While some defensive backs shy away from physicality, he asks for seconds. His ability to undercut routes and deflect passes with elite size at 6’3″, combined with the aforementioned physicality, allows him to be a Swiss-Army knife for a defense in need of stars.