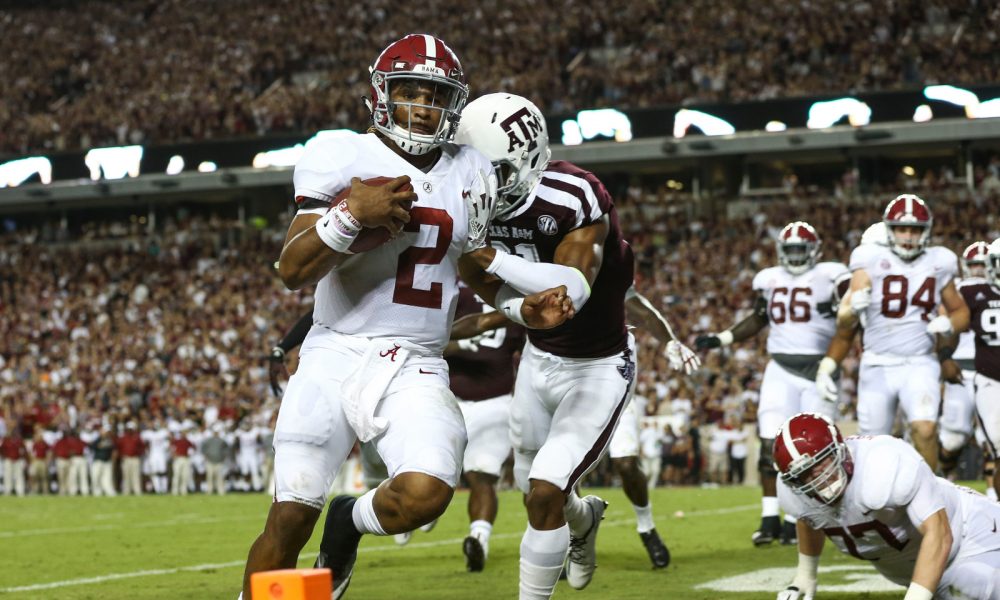 It has been a perplexing offseason for Jalen Hurts.

The individual who had once compelled everyone to wear a “Hurts So Good” button on their shirt is now in the middle of a highly-profiled quarterback race and according to his statement toward the press during media portion of Fan Day, he felt as though he’s been “counted out.”

In his two seasons as the starter at Alabama, he has set records, obtained a 40-10 ratio of touchdown passes to interceptions, won Southeastern Conference Offensive Player of the Year and assisted the Crimson Tide to a pair of College Football Playoff national title games.

Aside from his strong points, not being an uber-elite passer has been a thorn in his side.

After Tua Tagovailoa delivered the Tide to a national championship win over Georgia back in January, rumors sparked that he should be the starter. A multitude of people – from fans to national media pundits – felt as though the rising sophomore can do much more offensively.

Outside noise combined with the remarks Hurts’ father, Averion Hurts, made in April had the junior signal caller and native Texan very frustrated. Despite his desire in wanting to speak with the media sooner, Hurts was remained quiet. However, he got his opportunity Saturday.

“This is a situation that is uncontrollable,” Hurts said on the quarterback battle.

“Coaches can’t control the situation. They will dictate who plays, but as for other variations to it they can’t control it. This whole spring, ever since the title game, they kind of wanted to let it play out. I guess they didn’t think it was a thing or they tried to let it die down like it was not there, because there has always been an elephant in the room. The whole spring, coaches included, no one asked me how I felt. No one asked me what was on my mind.”

In terms of trying to handle the conversation now, Hurts said it’s too late and the narrative has already been created.

“As a player, you want to feel some concern from your coaches,” he said.

“I don’t think they were not concerned because they were, I just think they were not bold enough to ask. I think this is something that should have been talked about a long time ago instead of here, but it’s here now. It’s kind of like a stove. After that game, the stove got turned on. The heat got turned up. So, now you already have the pot on the stove, you already got the food in and now it’s cooking. When the season officially starts, the food will be done.”

As if he wasn’t aggravated enough, Hurts dove into the rumors he heard about him needing to transfer despite telling Tide head coach Nick Saban that he was going to stay.

“I told him [Nick Saban] in June that I would be here,” he said. “It was never a decision made regarding me leaving. That was something that the general media placed on me and it’s something I never said. With that, I told him I’ll be here. And then they talk about how I’m about to graduate in January and how I should leave. Even when I am not in a situation where I think I should leave, I’m here. Why would l leave when I’m 15 credits way from graduating?”

In his defense of seeing people wanting to push him out, the former four-star remains to his gesture every time he creates a touchdown with his athleticism.

“I just brush it off,” Hurts said. “It’s silly to me, but this is the world we live in. People have counted me out since the championship game. People have said that I’m going to Texas or go here or whatever it is. Alumni have said that, but regardless of what people say I am still here.”

He never said anything about transferring, in fact, the lone thing Hurts always mentions is desiring to be the best quarterback he can be. Upon hearing what he said, a fire has been lit and one could see the best ever come from him.