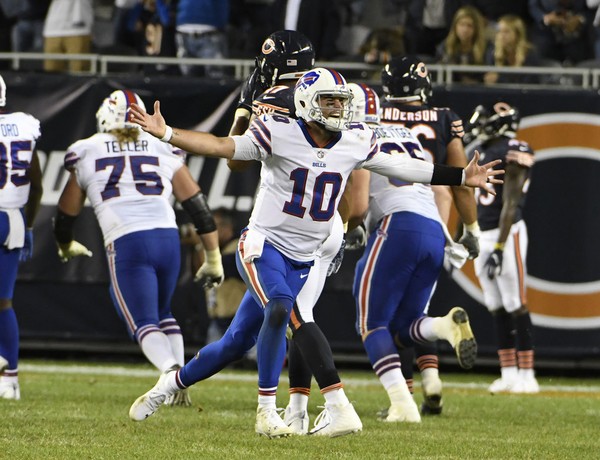 Today is a huge day in the NFL. Final rosters are decided, and teams have mulled through hours of preseason game tape in hopes of getting the best product on the field. At Touchdown Alabama, we are following all NFL roster moves regarding ex-Tide stars. Check out the detailed list below, to see who made their respective teams and those who will look elsewhere to continue their professional career. We will update this list periodically, as more moves are made around the league.

Cam Sims made the Redskins 53-man roster. Sims had a fantastic preseason and offered a great level of consistency, proving week after week that he belongs in the league. His ability to make tough catches stood out to Washington head coach Jay Gruden and the Redskins organization are high on his future. Sims went undrafted but is showing the NFL that was a huge mistake.

Surprisingly, undrafted receiver Robert Foster made the Buffalo Bills roster over former first-round pick, Corey Coleman who was acquired in an off-season trade from the Cleveland Browns. That’s great news for Foster, who had a strong finish to training camp after an inconsistent start. Offensive coordinator Brian Daboll should find Foster a role as a deep-threat in the Bills offense, due to his great speed and athleticism.

It’s been confirmed that AJ McCarron will be on the Buffalo Bills roster in 2018. This comes, after suffering a shoulder injury in the second preseason game. Many, including myself, thought McCarron would be out for an extended period of time. However, he battled back to compete in the final preseason game and made a case for a roster spot,  leading the game winning drive against Chicago. It’s unclear if he will be the starter week 1, as head coach Sean McDermott has yet to make a final decision.  UPDATE: Just hours after making the Bills final roster, it was quickly announced that AJ McCarron has been traded from the Buffalo Bills to the Oakland Raiders. Buffalo will receive a 5th round pick in exchange for McCarron. There, he will back up starter Derek Carr and will have the opportunity to play under quarterback guru, Jon Gruden.

Mark Barron will be a member of the 2018 Los Angeles Rams this upcoming season. Barron was out all preseason with injury and many wondered, would he be a salary cap casualty with a $10 million dollar price tag for 2018. Apparently even with his absence, Barron is viewed as a key piece for a Rams Super Bowl run. He is their best and most experienced linebacker, his veteran presence will be heavily relied upon.

Cornerback Cyrus Jones was released by the New England Patriots Saturday, after two seasons with the team. Selected in the 2nd round of 2016 NFL Draft, Jones played in 10 games as rookie and was a part of New England’s Super Bowl LI championship team. In 2017, he was injured in the final preseason game, suffering a torn ACL and meniscus. He played in the final two games of the 2018 preseason but the comeback effort wasn’t quite enough. If Jones clears waivers, he could end up on the Patriots practice squad.

Bo Scarborough was officially released by the Dallas Cowboys. Selected in the 7th round of the 2018 NFL Draft, he wasn’t a guarantee to make the team. Scarborough did have a good start to the preseason, scoring a touchdown in his first career game but missed time with injury. He could end up on the Cowboys practice squad but that’s unlikely. Scarborough is a talented young player and a team looking for a change of pace runner would gladly sign him to their active roster.

ArDarius Stewart was released by the New York Jets after being a fourth round pick in 2017. Hopefully, Stewart get an opportunity elsewhere or the Jets will add him to their practice squad. Stewart caught 6 passes for 82 yards in his lone season with the Jets.

Cornerback Levi Wallace was released by the Buffalo Bills. Wallace had a pretty good preseason and the Bills will probably try to stash him on the practice squad.

Tony Brown was released by the Los Angeles Chargers. Brown had his moments in the preseason but he wasn’t consistent enough to lock down a roster spot on a team that has a deep secondary.

Wide Receiver Gehrig Dieter was released by the Kansas City Chiefs. That’s comes as a surprise, reports led many to believe that Dieter was having a strong camp and would be a good candidate to make the team. He showed teams that he is worthy of a practice squad spot. Dieter will likely spend time there to start the season.

Others who were released:

OL Korren Kirven was released by the Dallas Cowboys

OL J.C. Hassenauer was released by the Atlanta Falcons

FB Jalston Fowler was released by the Atlanta Falcons

OL Cyrus Kouandjio was released by the Denver Broncos

OL Brandon Greene was released by the Chicago Bears