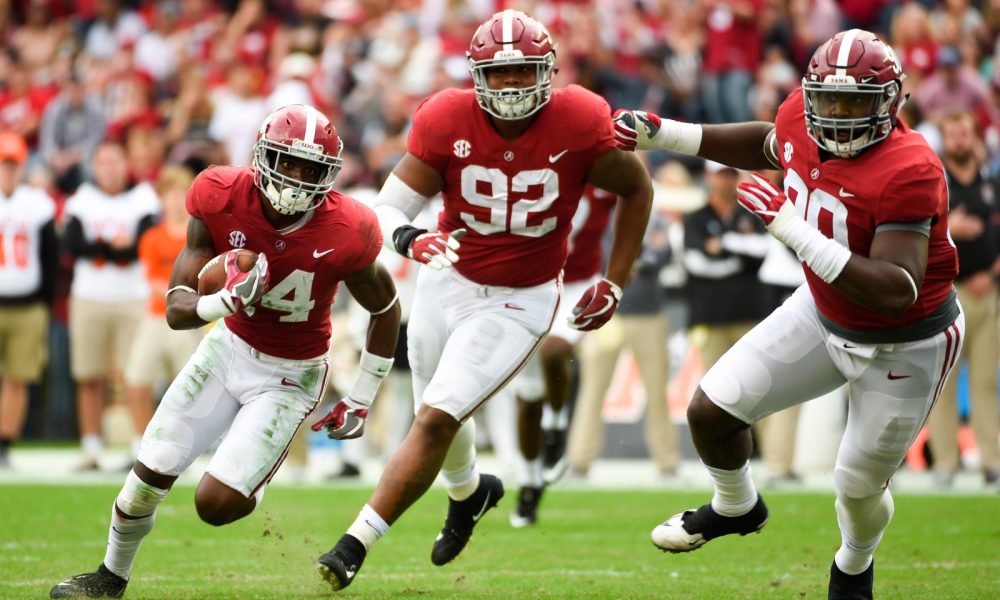 Deionte Thompson has trusted “The Process”, and his decision to do so is now paying off big time. After closing out last season for Alabama football with a strong performance, he’s been absolutely on fire this season and is beginning to look like the most talented defensive back in the entire nation. Alabama fans have known for quite some time that he had NFL potential, but now, three games into the 2018 season, the rest of the world is starting to take notice.

In 14yrs of playing in the NFL, Ed Reed was the gr8est safety I studied on tape. Thompson’s range and ball skills reminds me of Reed. I’m not saying he’ll be that, but this kid jumps on the screen.

As a recruit, Deionte was one of the best prospects in the state of Texas, and according to the industry composite rankings, he was the number two safety nationally in the class of 2015. Coming out of West Orange-Stark High School, Deionte finished off a fantastic high school career by committing to Alabama, and heading to Tuscaloosa to play for one of the greatest defensive coaches of all time, Nick Saban.

Upon arriving at Alabama, much to Deionte’s surprise, he was asked to make the switch to wide receiver to sure up depth at the position his freshman year. What a shock that must’ve been: one of the best safety prospects in the entire nation being asked to play offense. Very quickly, Deionte and his family decided to trust Coach Saban, and have faith that everything would work out for the best, and boy did it ever.

Fast forward a couple years, and the talent and potential that Deionte possessed were becoming more and more apparent with each passing practice. Deionte was ready to contribute, but again, he’d have to make a decision to trust “The Process”. Last season, Hootie Jones was a fifth-year senior. Even though he may not have been quite as talented as Deionte, Nick Saban chose to start him to give him every opportunity to be seen by NFL scouts as his mother was battling cancer. Deionte stayed the course, and when Hootie went down with an injury, Thompson was ready to shine. In the last two games of the year, Deionte played like a man on fire and helped the Tide win their 17th national championship.

Thompson, Alabama’s safety is the best college safety I’ve seen in since Sean Taylor (Rest his soul). Don’t @ me.

Entering this season, there was no doubt that Deionte would be the starting safety for the Alabama Crimson Tide. Yet, he still had some things he wanted to improve on and he did just that. His anticipation, range, and closing speed have improved greatly. Not to say that they weren’t already elite, but Deionte is a true competitor and is always looking to improve his game. Now the leader of a young Tide secondary, Deionte is letting his play do the talking.

Don’t care what anyone says…… 14 from Bama is better than everyone that played in their secondary last year!!! Deionte Thomson is a grown man!!

Through the first three games, Deionte has 15 total tackles, three tackles for loss, two interceptions, three passes deflected, and one forced fumble. After his incredible performance against Ole Miss, former NFL players, CFB analysts, and industry experts are starting to rave about the top safety of Alabama football.

Deionte Thompson is very close to Earl Campbell and models his game after him. Deionte is starting to show the same elite talent that his idol played with, and may even be better when all is said and done. Crimson Tide fans and all of college football fans alike should start getting ready to witness the play of a potential all time great safety in Deionte Thompson, and we’ve barely even scratched the surface with him.

14 Deionte Thompson is just the next superstar safety for Alabama. Cover skills are insane. 2 picks on the year already but he will have a ton more.

Stay tuned to TDAlabamaMag.com for all your Alabama football and recruiting news and updates.