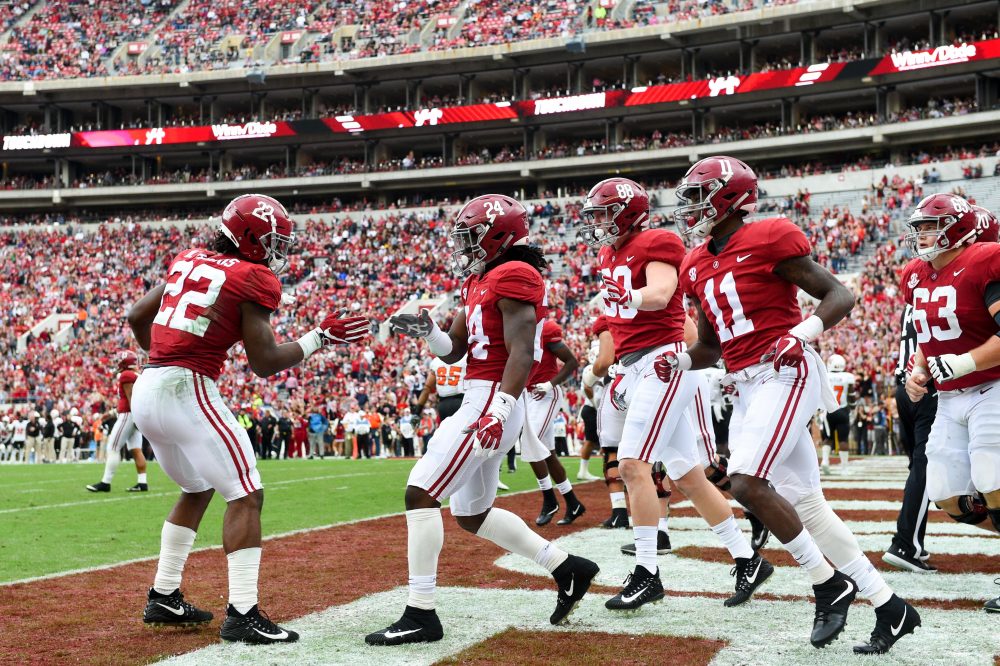 While the passing game is absolutely on fire for Alabama football, the running game seems to have taken a step back in 2018 through the first four games. Bama will need to get that fixed asap as we move on into the second half of the schedule.

Alabama football fans have waited a long time to see Bama be this type of threat to score at any given time. Watching this year’s version of the Crimson Tide’s offense it becomes immediately clear that the passing game is leaps and bounds better than at any other time in the Nick Saban era. As fun as that is to behold, Alabama football has been built on the ability to run the ball at will, and on having an elite defense. This year, the elite defense is there, but the running game has been lacking. Below are offensive stats for Alabama from the first four games of 2017 and 2018. Take a look and comment about what exactly you think the Alabama football program will need to do to get this running game back on par.

Looking at these stats, it’s very clear that while there isn’t a devastating drop in production from the run game, it’s definitely an issue that Mike Locksley and his incredible stable of backs surely need to approve upon if the Tide are going to be able to impose their will on opponents down the stretch. Having a solid running game will also give Alabama the ability to lean on their adversaries late in games, and close out the contest. In answering a question that I posed on Twitter, Cole Cubelic said that if there is one thing he would like to see Alabama work on starting this Saturday against the University of Louisianna-Lafayette, it would be for the middle three players on Alabama’s offensive line to work together a little better. As far as the running game goes, it begins and ends with the big guys up front. If Alabama’s Brent Key can get Lester Cotton, Ross Pierschbacher, and Alex Leatherwood to match the play of offensive tackles Jonah Williams and Jedrick Wills, the Crimson Tide’s running game will be just fine. One last thing to consider is that last year’s starting right tackle Matt Womack is back at practice and starting to look healthy again. If this offensive line continues to underperform in it’s run blocking duties, Womack could provide just the mauling, bulldozer-like spark that this offensive line is currently lacking.

Stay tuned to TDAlabamaMag.com for all your Alabama football and recruiting news, updates, and analysis. Follow us on Twitter @TDAlabamaMag