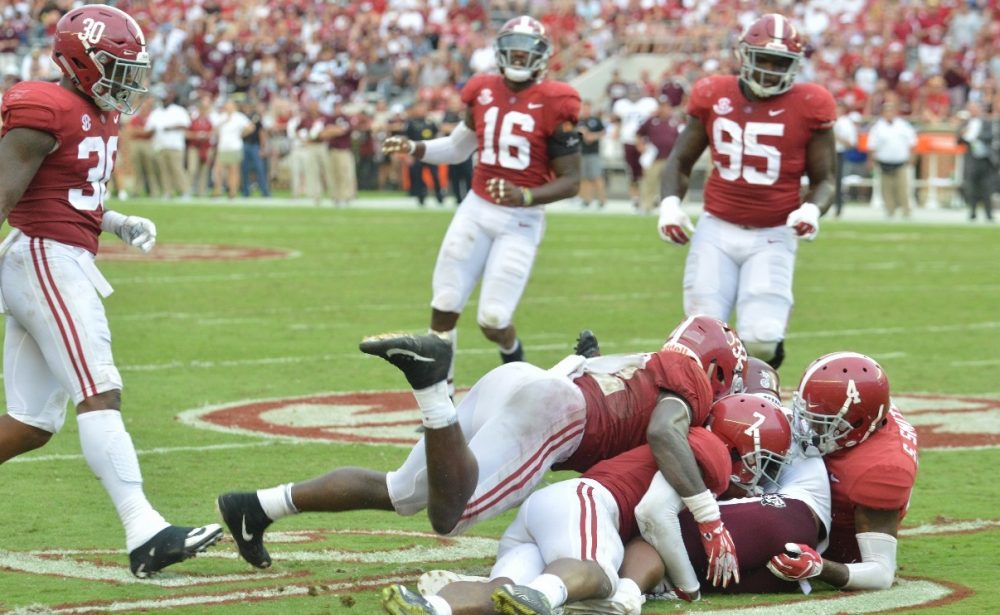 Fans are so euphoric over the offensive machine that Alabama is rolling out each game that they may be missing another big piece of the greatness of this team. See what it is.

What Alabama Fans Could Be Missing in This Wonderful Season

This season at Alabama, there’s a euphoria that goes way beyond just winning. Alabama fans are used to winning. It’s how they’re winning that have fans so wildly enamored with this season.

It’s the season of Tua, it’s the season of averaging over 55 points a game, four games into the season. It’s a season of finally seeing the offense convert third downs, score at will, hit those passes deep down the field, seeing completions that just dazzled us all and yet still seeing Damien Harris and others breaking off those long runs and running wild as they seem to always do.

Alabama fans and even the detractors that don’t like them, are all marveling in this offensive machine that is one of the highest scoring offenses in the country. Right now Penn State averages 55.5 points per game after playing four pretty miserable teams. None of their opponents have won more than two games. Meanwhile, Alabama has played a team in the top 25, Texas A&M, who just barely lost to number 2 Clemson, a three win Ole Miss team, a three win Arkansas State team and a .500 Louisville team who is usually a very good team.

In contrast to the nation’s number one scoring offense at this point in the season, Penn State, who as I’ve I’ve said averages 55.5 points a game, Alabama has averaged 5.38 against way better opponents.

Plus when you factor in that Saban has pulled Tua for big segments of each of these four games, it’s easy to say that if he had not taken his foot off the pedal, that Alabama could have hung 70 on each team they’ve played this season.

But my biggest pet peeve in many past seasons was the miserable third down conversion rate, they lead the SEC in that department now as well as being one of the top teams in the country at it too. Last season they were just the 60th best. What a difference a year and a new quarterback makes.

So with all this going on, it’s far too easy to have fans miss another big thing going on in Tuscaloosa that to this old reporter, is just as important and almost as surprising.

That other big thing is a defense that is doing just as well with their business as the offense is with theirs.

They’re tied for second in the nation by only a small fraction behind first in total sacks. This is a defense that is just plain nasty to play. They really get after the quarterback.

They are also tied for second in the nation in interceptions. So much for worrying about a young group of defenders that so many in the press were worried about, including myself.

And with Alabama playing more teams in the future scoring a lot less points than Texas A&M and Ole Miss have been scoring, the defensive numbers will only go up.

So with all the great and wonderful offensive stats getting piled up, don’t lose sight of the fact that the defense is putting together a wonderful season of their own and for the first time, Alabama is building a complete team without one unit having to carry the other.

Perhaps that is the biggest thing that Alabama should be marveling over. Nick Saban has always relied on defense first and quarterbacks who just manage the offense enough to distribute the ball to bigger playmakers. Now they have a quarterback who actually is the biggest playmaker on the team.

But there are men on that defensive squad who are quickly becoming the new stars themselves and as that unit gels even deeper and many of the youngsters gain even more experience, they could be one of the nastier defenses that Nick Saban has ever brought to the playoff season.

If that’s true, then that’s a fact that shouldn’t get lost in the giddiness of a sensational offensive season.