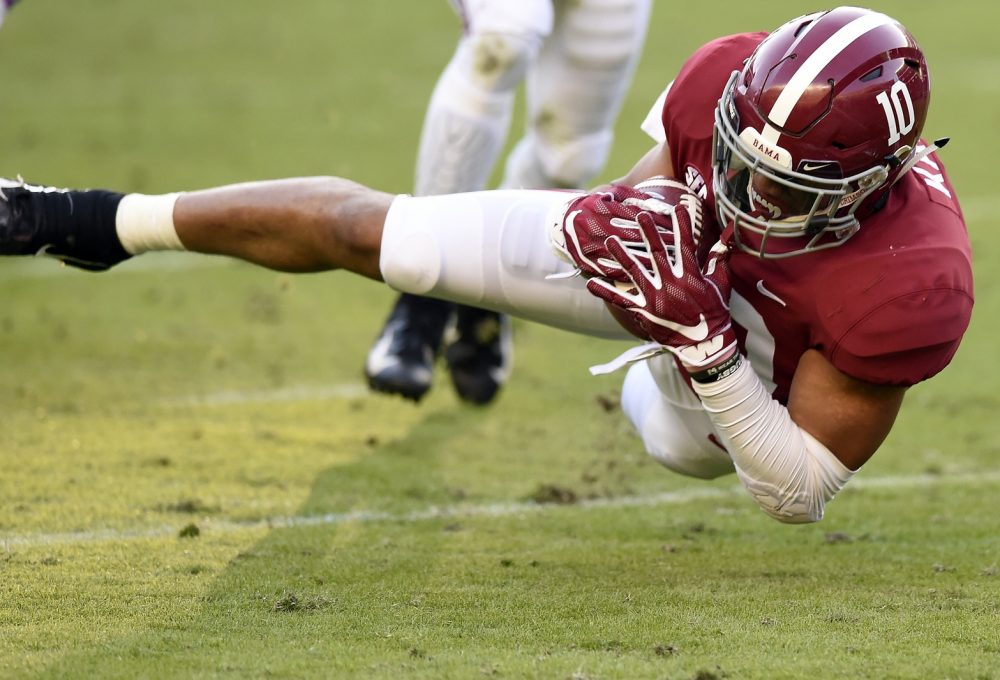 Is this the best Crimson Tide football team that Nick Saban has had throughout his long tenure at Alabama? They are currently -265 to win the National Championship Westgate in Las Vegas Superbook and the top online betting sites like, Bovada.
Can Anyone Beat Bama?
This could very well be the most dominant Alabama team that I’ve seen in my lifetime. Their defense has been absolutely dominant and the offense seems to have more firepower than the Marines.

Alabama only had 23 yards in the 3rd quarter. So did the Bulldogs create a map that other great like Georgia, Michigan, and Clemson can follow? We won’t find out until after The Citadel Bulldogs and then Auburn Tigers.
-51 vs. Citadel
The Crimson Tide have been listed as fifty-one point favorites over the Citadel Bulldogs. Some might be thinking that a 51 point spread is huge but some computer models are predicting a 70 to nothing shutout!

Citadel has lost to Towson, East Tennessee State, Chattanooga, Wafford, and UNC. Meanwhile, Alabama has put an average of 48.60 a game against some of the best defenses in the country and shutting out some of the better offenses. Texas A&M had the No. 21 defense in the country and Bama put up 45 points on them. Mississippi State is the No. 6 defense in the nation, and the Tide still put up 24. So it’s safe to say that Citadel is going to lose … by a lot.

But what about Georgia on Dec. 1st or teams like Notre Dame, Clemson, and Michigan that Alabama could run into in the playoffs? The Michigan Wolverines have the No. 1 defense in the country and are clearly better than Miss. State. So, they are the most likely to give Alabama trouble in the playoffs. Harbaugh’s boys are likely to hold the tide to the lower 20s. The same goes for Clemson and their No. 3 defense. That said, Notre Dame and Georgia will probably get scored on up into the 30s.

But for any of these teams to actually win, they have to be able to score as well. Ole Miss had the No. 6 offense and only were only able to put up a touchdown on the Crimson Tide. Mizzou is No. 17 offensively and they only managed 10 points. Texas A&M put up at the No. 24 offense put up 23 points. Although A&M has the lesser ranked offense, they are very balanced.
So with a team like Michigan who has an elite D, but a middling offense at No. 54, they are likely to get shut down by the Alabama defense. That could be a 21-3 or 21-6 Alabama win. Georgia at No. 26 and Notre Dame at No. 32 probably won’t put up more than a pair of touchdowns against the Tide. Clemson is the only team that has a legitimate shot.

Clemson has the No. 7 offense, but like A&M, it is very well balanced. They could end up scoring somewhere around 20 points while also holding Saban and Co. to the low 20s with their No. 3 defense.

﻿
Nick Saban will play QB Tua Tagovailoa this week: Wise move or not?
Alabama ranked No.1 in CFB playoff rankings
To Top
%d bloggers like this: