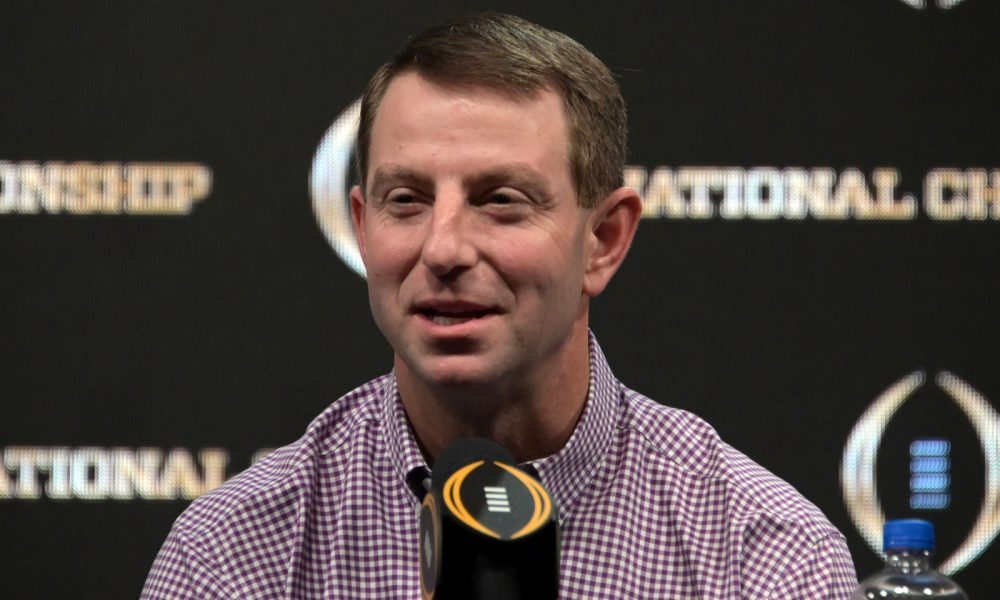 Dabo Swinney’s new contract has Alabama fans thinking about how it could affect his future, mainly coming to Alabama one day. See the arguments and pick one

Dabo Swinney is 49 years old and will be 60 when his present contract is over at Clemson. That won’t leave a lot of time to coach elsewhere should he want to. If you talk to Bama fans, they think Dabo is the guy to go to when Saban retires. So Dabo’s contract is over about 2029 and Saban’s current contract is over in 2025, but Saban has indicated lately that he may want to go further than that. Hmmm…. Let’s start the debate on whether Dabo would one day come to the Tide or why he won’t.

Why Dabo Will Come to Tuscaloosa One Day as Coach –

First of all, look at his contract. When they were crafting it, they asked Dabo, who is always truthful or at least mostly truthful, told the school that he would never be interested in going to the NFL. Strangely enough, there is no buyout should he go to the NFL since they know he’s not really interested.

Secondly, it was apparent where Dabo said is the only place he’d ever be interested coaching beside Clemson. Strangely enough the buyout to leave to go Alabama is higher than anyplace else. (Around six million is that buyout) So he must be interested in coming to Alabama and Clemson knows it.

Who knows, Dabo might want to prove he’s not a one trick pony and can win it all at another school just like Saban, Urban Meyer and others have.

Also figure in the fact that every time Dabo is asked that question, he won’t say no and he won’t say yes. He politically correctly leaves it open. But he does say on the plus side for Bama fans that Alabama is his home and that coaching there would be something that would be akin to a dream come true.

Every coach dreams of going back to “Mama” when they call, being the “Golden Boy” once again at the school where it all began. And lastly, he’d like to leave his mark where all once began and leave a statue in that championship winning circle coaches along with “Bear” Bryant, Nick Saban and the coach who helped him get into coaching, Gene Stallings. Just like Dorothy said in the movie, the Wizzard of Oz, “There’s no place like home”.

Why Dabo Will Never Leave Clemson

He is the “Bear” Bryant of his school, the guy that really made the program into a continuous national powerhouse. He is the guy that will be worshiped for that program for years to come just as Bryant was and Saban will be at Alabama. That’s going to be very hard to walk away from. That’s why Bryant never left for the NFL and why Saban will coach his last team at Alabama.

If that’s still hard to believe, then figure this into the equation. Dabo is one of the truest nice guys in coaching. Clemson gave a young coach with no head coaching experience, no defensive coordinator experience and no real reason to give him the reigns of a major college football program, but they did. There was lots of speculation that his was supposed to have been a simple stop gap measure after the firing  of Tommy Bowden mid season in 2008, but Dabo was able to finish the season with more wins than losses and line up a great recruiting class to boot. That gave Clemson reason to let the experiment play out just a little longer and in his first full season, he tied for first in the Atlantic division, brought in another great recruiting class and finished in the AP top 25.

He feels like this is the school that gave him the chance  when no one else would have done that. He has a strong loyalty factor. Clemson gave him the chance no one else would, Clemson made him a millionaire, He’s spent more of his adult working life in Clemson than he ever spent in the state of Alabama, has an established network of recruiting in his area and now has Clemson as a place that is rivaling Alabama as a place to come and win championships.

Say Saban retires in 2029, the same year Dabo’s current contract is over, Dabo will be 60 and while there’s still a lot coaching juice left at that age, even Saban decided at that age that another move wasn’t in the cards despite all the other offers he got when he was 60. You start thinking about legacy. Clemson is a machine that Dabo built and will continue to have it running like a well oiled machine. It will be much easier to keep that going than to start over with a new coaching staff, boss and so forth.

Best Guess Answer as To What Will Happen

2019 is a long way off. Dabo may not even be the desirable coach 10 years from now that he is today. So there’s that. Plus there may be a much hotter commodity that comes to the forefront that would be the ultimate guy to take over for Saban. I haven’t found a crystal ball that sees 10 years in the future. So anything can happen.

But while both ends of this argument have merit, in the end, I believe that joy of the “Hero’s Return” of coming back to Alabama won’t overcome the “Heel Leaving” guilt of walking out on the place that made him what his is today.

Dabo is going to be one of those legendary coaches who built a program that made it to the top and retired there to go into the land of glory and legend. It’s my best guess that he never leaves Clemson until he’s finally retiring from coaching.