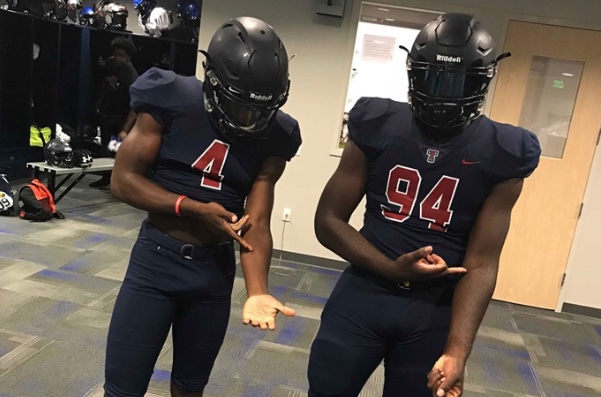 The Crimson Tide has been persistent in their push for 2021 defensive end, Tunmise Adeleye, and their hard work is paying off.

Adeleye is a 2021 defensive end out of Katy, Texas,. Alabama offered him during his freshman season and have remained consistent with their contact. It is one of the reasons they are in such a good position with him.

“They sit at the very top of my recruitment as of right now,” Adeleye said.

Alabama’s special team’s coach Jeff Banks has made his presence felt in the state of Texas on the recruiting trail, especially in the Tide’s push for Adeleye.  He is Adeleye’s main contact with the program, but Nick Saban and Alabama defensive line coach Brian Baker has also expressed their interest to him. All three of them have told him they feel the exact same way about him and his potential to play at the next level.

“I speak with coach Banks twice weekly,” Adeleye said. “I have met with coach Baker and coach Saban. They have been adamant about how their interest in me has never wavered since they offered me my freshmen year.”

Houston and Florida State remained as heavy contenders for Adeleye’s commitment and they are plenty of other programs, who want to get in on Adeleye’s recruitment and there is no secret why. At 6-3 and 260 pounds, Adeleye is all muscle and could bull rush with the best of them. He is tenacious on the rush and never stops going after the quarterback, which often causes teams to double team him.

Alabama has prided themselves on having an effective defensive front and has produced the likes of Quinnen Williams, Jonathan Allen and a handful of other talented defensive linemen. This group has helped anchor Alabama’s impressive defenses in the past and have played a vital role in their success. Adeleye believes the culture Saban has built at Alabama is the foundation of that success.

“I believe Alabama’s success is a testament to a winning culture coach Saban has engrained into Alabama,” Adeleye said. He has propelled Alabama to the pinnacle of college football and I don’t foresee him slowing down anytime soon.”

Vols commit, Ebony Jackson, feels Alabama offer could be the beginning of a recruitment boost