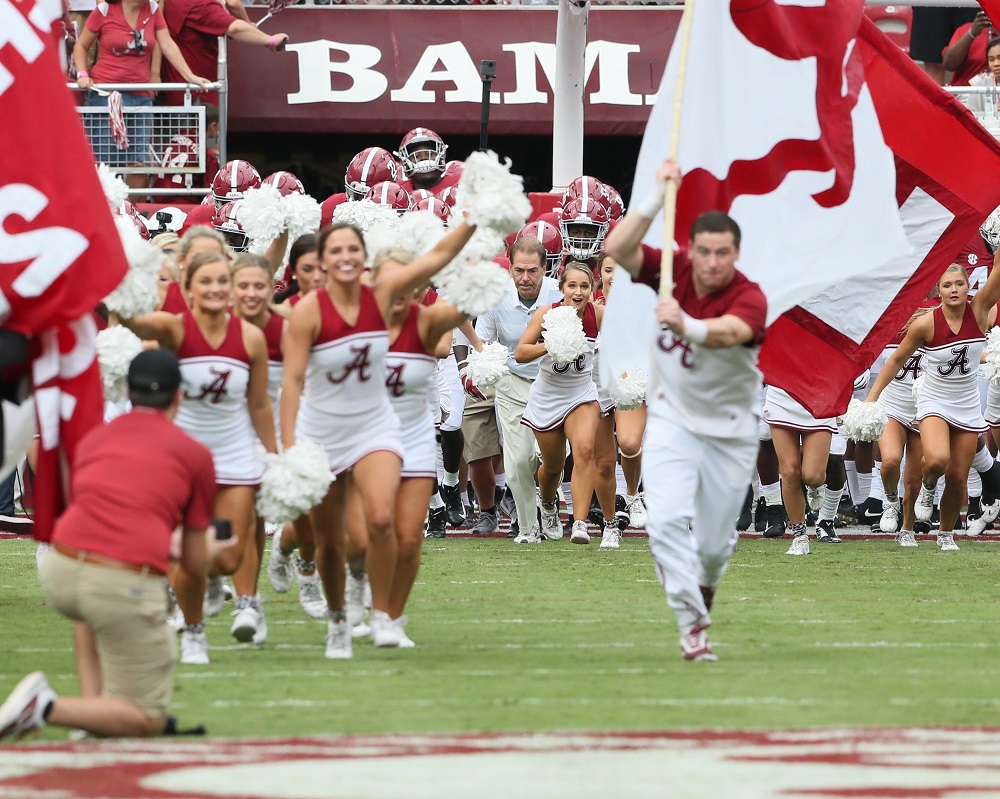 Alabama’s last games left fans with things to worry about. Read why Alabama fans have a lot less to worry about this season. Read and see if you agree.

Why You Shouldn’t Worry About Alabama Football in 2019

Nick Saban isn’t going to like this article. He’ll put it on the rat poison stack and never mention it except in passing along with all the other articles that show his 2019 squad as poised to return to the championships. We doesn’t like fans not to worry about Alabama football, but especially he doesn’t like his players with nothing to worry about.

But doing preseason studying, here’s why you should rest your fears that Alabama could falter again in 2019 like they did in 2018, where they just didn’t lose to Clemson, they got whipped.

So while the overall article will point out things Saban won’t like, there will be things equally pointed out that Saban might like, like calling out some players who need to step it up and let the team down last year in times they shouldn’t.

So here we go.

Last year the offense let us down at key times. Most will put the blame on the late season slide to Tua Tagovailoa’s injuries, but there was much more than that. They also didn’t stand up as well under better competition. Auburn gave them a game into the third quarter, the Georgia game was tooth and nail and they got rolled by Clemson.

After re-watching those three games, Jerry Jeudy dropped some very catch able balls that stopped drives that could have changed the games. The offensive line had times when the quarterback was left to scramble or die and then there were the untimely interceptions in big games. In the championship final Bama could only muster a lousy three points in the last three quarters.

So why shouldn’t you worry that those mistakes may be made again?

Tua had his 30 minutes of fame as a freshman, finished his sophomore season with the all too tried and true sophomore slump moments and he starts the season healthy and could very well finish it that way too. Plus there’s a famous saying that goes, “Show me a man that hasn’t made mistakes and I’ll show you a man that hasn’t learned a lot.” As painful as parts of the Georgia and Clemson games were to watch, all the players in them learned a lot.

This season Tua will be in a full fledged battle with Clemson’s quarterback, Trevor Lawrence and he’ll be the Tua we saw for most of the season last year, all season long this year.

As good as Jonah Williams was at left tackle, the most productive time in any recent playoff game at that spot was when Alex Leatherwood took over him in the 2017 championship. No one got close enough to touch the quarterback against Leatherwood. The line play, even with the loss of a great tackle and center, should be fine.

And Jerry Jeudy will be auditioning for the NFL this season and his untimely drops should be a thing of the past. Plus, if he isn’t careful, he’ll be out-staged by a lot of other talented receivers on this team. The offense should be unstoppable again, but this year, production shouldn’t fall off in crunch time this season as it did last year.

Now on defense. Last season they had trouble stopping teams from scoring in the all important late season games. Saivion Smith was torched when it counted and while he could have benefited from another year at Alabama, it may make Alabama a better team that he left early for the NFL. Other players too had their moments of not being on top of their game, it wasn’t just Smith’s fault. This season Alabama brings back a lot of talent in the secondary and some very talented people to fill in.

This might be the first season in a long time that folks won’t have to worry about the defensive secondary costing them some wins. They could be one of the best units they’ve fielded in a while.

The defensive front will be impressive as it seems to be every year and finally, you may not have to hold your breath for extra points and field goals. That hasn’t been true for a while now.

Finally, lets talk about some other factors that may make Alabama breath easy. The schedule is a cakewalk early on as new players gel into their positions and in playing with the regular starters. Though the SEC as a whole may be an improved conference this season, the gap between an improving SEC and Alabama was just too wide to make a difference this season.

As for the only other SEC team that could play with Bama last season, Georgia may have a tougher time replacing some missing pieces. The replacement punter isn’t getting the job done, a missing star/nickel back in the defensive backfield must be found and their reliable kick and punt returner is gone. That guy, Mecole Hardman was also their talented slot receiver.

Also D’Andre Swift loses his 1000 yard plus running mate, Elijah Holyfield and the oft injured Zamier White, with I think two past ACL injuries, Brian Herrian, who hasn’t made it as an impact player yet after going to his senior year this season and James Cook don’t seem to have the capacity to be as lethal in concert with Swift, who can be a handful. This might mean Swift could be over used and injured by SEC Championship time. Fromm might well beat a lot of teams without a great running game, but he won’t beat another great team without one.

Plus, the Bulldogs are going to have a tougher schedule that last season, so the “beat up by championship time” label may apply to them this year instead of Alabama. Georgia is going to face a tougher Florida team, Notre Dame could be tough and Missouri is the kind of team that’s going to upset someone this season.  Lastly near the end of the season, Auburn and Texas A&M can always jump up and bite you, plus you can bet they’re going to be very physical games.

Lastly, there’s Clemson. They finally lose a wide receiver, Hunter Renfrow, who it feels like has hurt Alabama for 20 years. They also lose about 29 other seniors to go along with 4 star junior players who will certainly be missed as well as the other 30.

While they have talent in the reserves, they’re not going to fill the talent gap quickly this season. Clemson was a very heavy senior laden class last season and they’ll miss them this season. They’re losing their defensive tackle Christian Wilkins who stayed for a senior season and a shot a championship despite being sought for the NFL last season. The other defensive tackle, Dexter Lawrence left for the NFL after testing positive for illegal substances, star cornerback and junior Trayvon Mullen and  lineback Tre Lamar also left early.

They could lose both tight ends, one is gone for sure and the other may go into the military and forgo his senior season. And their second best running back Tavien Feaster, entered the transfer portal to be a starter somewhere else. That’s going to put a lot of strain on Travis Etienne to carry more than Dabo may like even though they have some other young and talented backs. They’re going to be good, but are they going to be good this year? Also gone is their best offensive lineman and so many more good players that even Tiger fans may start to worry.

And let’s dwell on this for a second, after a season of wonder, would you be surprised if Clemson’s golden boy quarterback, Trevor Lawrence has his sophomore slump? With so many pieces of the puzzle missing and so much being put on his back, it would be easy to see him buckle from time to time. Last season he wasn’t involved in a Heisman race like he will be this year, so we can just wait and see how distracting that will be for him.

Lastly, this season Alabama has on it’s staff men of unquestioned coaching ability as Saban leaned more toward game prep and game day acuity over recruiting. One can’t help but predict that will show up on game day. Plus in the end, you still have Nick Saban steering the program and there’s no one better for that job. If these coaches can squeeze all the talent out of these players, stop dumb penalties and keep them focused, there isn’t a group of 85 this talented anywhere else in college football.

Alabama starts the year with the nation’s best group of receivers combined with one of the hottest quarterbacks out there, backed by a solid running back corp and a big offensive line. They have a defensive front of veterans and hungry stars to be and the most veteran group of defensive backs in a long while with a field goal kicker that can actually be counted on.

Add all this up and you won’t have to worry about Alabama too much in 2019. Sorry coach, I know you hate this rat poison, but sometimes we writers just have to call ’em as we see ’em and this season looks pretty darn good at this point.

Alabama football has pieces in order for a stifling defense in 2019
Underrated Tide offensive line in position to win Joe Moore Award
To Top
%d bloggers like this: