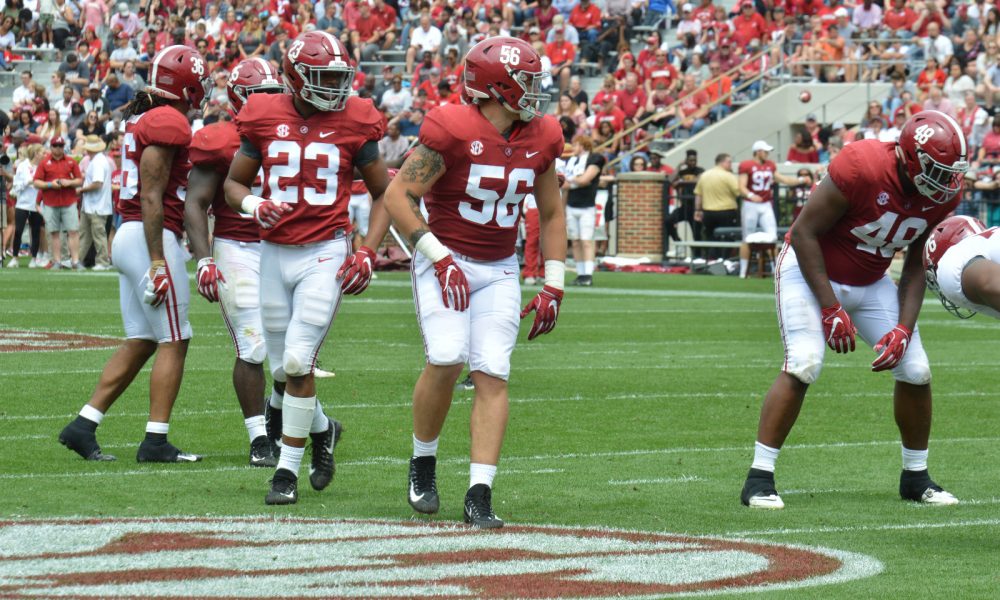 The next defender and first freshman is Antonio Alfano.

Makes good use of his hand

Not afraid to take on blocks

Does not outrun tackles

Alfano’s huge high school senior season catapulted him to the top of the 2019 recruiting class as he was able to snatch the title of the nation’s top player. The New Jersey native had 70 tackles, 10 sacks and six forced fumbles during his last season at Colonial High School. Alabama was able to land an impressive defensive line class in the 2019 recruiting cycle, which was lead by Alfano.

Alfano is also a scrappy defender on the rush and has quick closing speed.

Does not attack plays away from him

There is plenty of time for Alfano to grow as he is just a freshman and this is the time, where he is expected to hone in on his skills and make a ton of improvements. One of those areas is Alfano’s effort when attacking plays away from him.

If the Tide could get Alfano to consistently attack plays all over the field, they will have a complete edge rusher with an even bigger upside.

At 6-4 and 285 pounds, Alfano is expected to grow into one of the more athletic defensive linemen in college football and many expect him to make an immediate impact.  It is not out of the question to predict that Alfano will make the freshman All-American team.  He possesses all the tools to be the next great defender for the Crimson Tide and the door is wide open for a freshman defensive lineman to earn a spot in the Tide’s defensive line rotation.

UA receiver DeVonta Smith to build off deep threat abilities this season
Nick Saban, Alabama not urgent about signing a QB for 2020 class
To Top
%d bloggers like this: