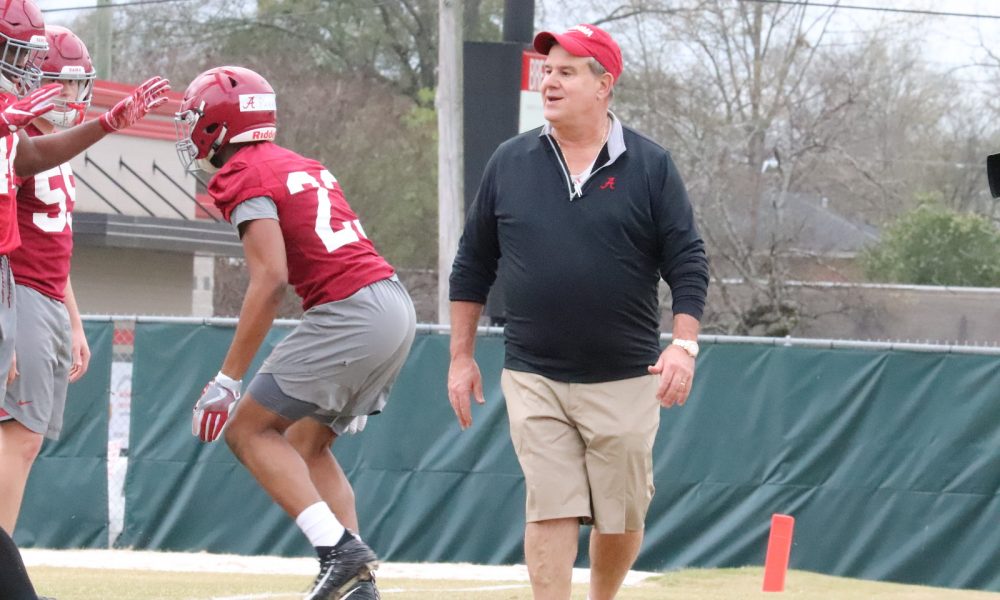 An extension of Nick Saban is back inside the University of Alabama football program, and the head coach is excited about his return.

Whether it’s classification, star rating or knowledge of the system, Sal Sunseri is not moved by these qualities.

Effort and consistency are the lone things to spark a response from the 60-year-old, who enters his 34th year in the coaching profession this season. Despite him being well traveled, every player that learned from Sunseri refers to him as “old school” and hard-nosed.”

Senior outside linebacker Anfernee Jennings called his position coach an “O.G.” earlier in the week, and it was Sunseri that helped start the run of unprecedented national championships under Saban.

He is arguably the most intense coach for the Crimson Tide – opposite Scott Cochran – however, the Pennsylvania native brings it from the mindset of a tough teacher.

His first stint at Bryant-Denny Stadium came from 2009-11 as assistant head coach and outside linebackers’ coach. Regardless of coaching talents like Courtney Upshaw, Eryk Anders, Corey Reamer, Nico Johnson and C.J. Mosley among others at the position, Sunseri moved with the same grit, technique and attention to details. In its two BCS National Championship campaigns with Sunseri (2009, 2011), the Tide gave up an average of 9.95 points per game, 214.5 total yards offensively per game, 76 rushing yards per game and a passer rating of 85.7 allowed.

His expectations for players at outside linebacker pushed the defensive line and secondary to excel, especially the back five. Marquee names such as Mark Barron, Kareem Jackson, Javier Arenas, DeMarcus Millner, Dre Kirkpatrick, Robert Lester, Marquis Johnson and Vinnie Sunseri forced 37 interceptions combined in both 2009 and 2011, while surrendering 17 touchdown passes.

A championship mindset never stops in one place.

Sunseri challenged himself to take on Florida State in the Atlantic Coast Conference in 2013 and was hired at defensive line coach.

Under the guidance of Jimbo Fisher, he propelled a defense that gave up 12.1 points a game, 281.4 total yards a game and allowed a passer rating of 93.77.

Although opponents averaged 125 yards rushing on the Seminoles, Sunseri’s defense recorded 35 sacks and defeated Auburn in the 2014 BCS title game by a score of 34-31.

He has not changed in his return to The Capstone.

Through the first full week of fall practice, Sunseri has created a competitive, strong desire for outside/edge linebackers to be great.

He strives for perfection in every drill and when one does not achieve it, it immediately hears from Sal.

His leadership not only brings a smile to Saban’s face and a “finish” attitude to the players, but it also allows the head coach to step back and not perform the amount of micromanaging that occurred last season.

Alabama has its first live scrimmage on Saturday and Sunseri will have the quarterback room running for protection.

It bothered him seeing the Tide not on top in 2018, and he wants to make sure that does not happen again.