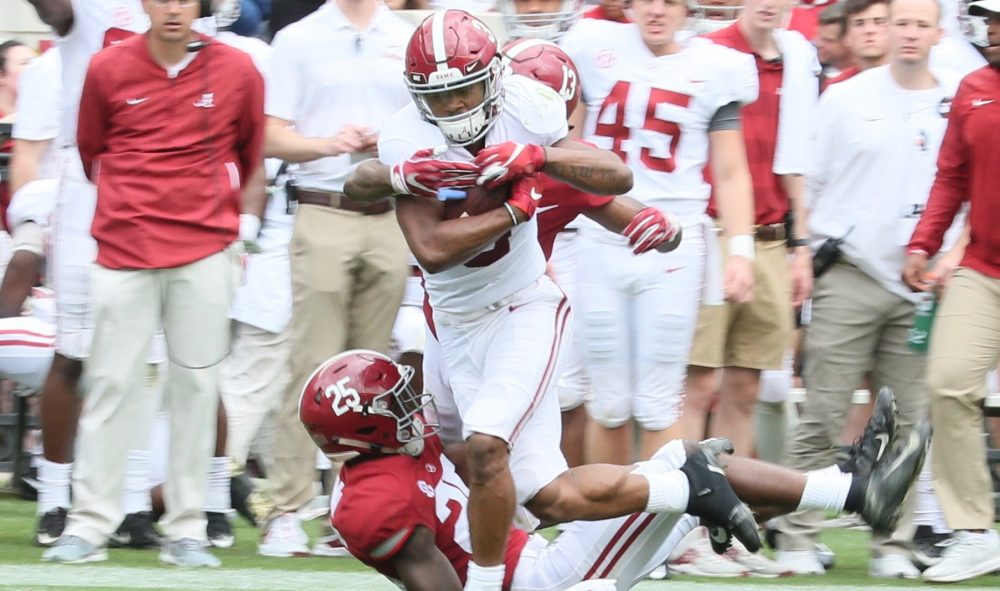 The next wide receiver and second freshman is John Metchie.

Can Catch in traffic

Has a strong frame

Metchie brings a different style to Alabama’s wide receiver room, which is a more aggressive one. He has some muscle packed into his 6-0 and 195-pound frame. He also understands the advantage of running tight routes.

The former 4-Star recruit showed Alabama fans on A-Day, he can catch the ball in a variety of ways. He caught the ball in traffic and was able to show he can turn short pass completions to medium and long gains with his tough running style as he fights for every yard.

Does not have game-breaking speed

Metchie does not have the explosive speed of other Alabama wide receivers, Henry Ruggs and Jaylen Waddle, but he makes up for it with his ability to make tough catches. The Canada-native thrives off being aggressive, dating back to his time in high school. He was often times used at the safety position and was not afraid to come downhill and make tackles.

Having top-notch speed is not a must for Metchie as he is more of a possession wide receiver. If Metchie continues to work on mastering running his routes, he should be just fine in Tuscaloosa.

Alabama’s 2019 wide receiver group is expected to be one of the top in the nation and Metchie will have to scratch and claw to get any playing time with the first team group. Fortunately, the Tide’s scheduled could allow Alabama’s second group some time to shine, which gives Metchie a chance to show what he can do, similar to the way he played in A-Day. Metchie also gives Alabama some depth if they are hit by the injury bug.

Touchdown Alabama has John Metchie ranked as a 4-Star recruit and No. 12 in the Tide’s 2019 recruiting class.