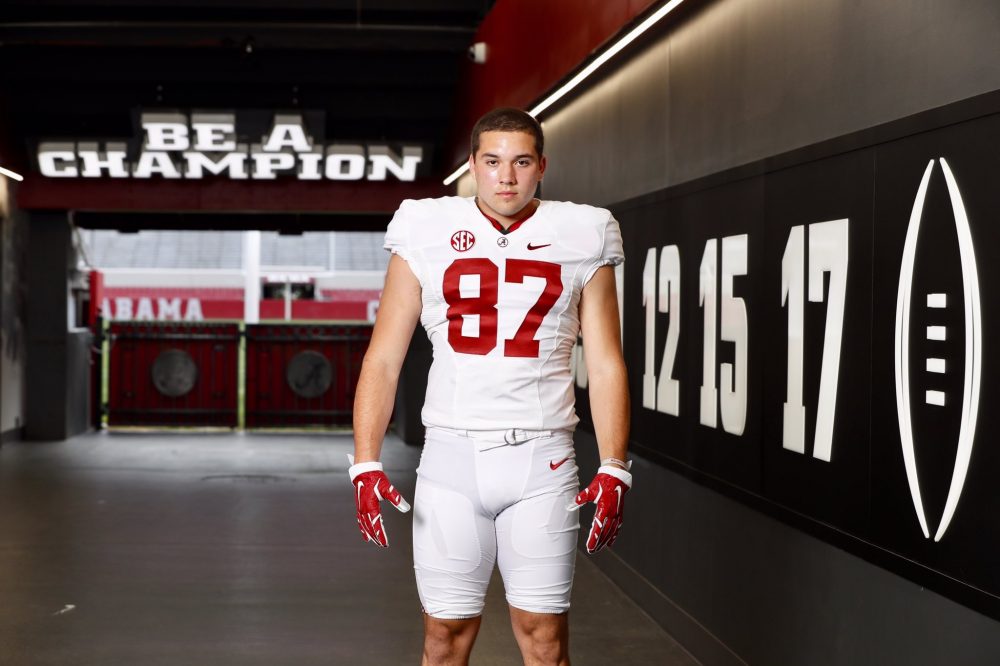 Alabama wants to expand the role of the tight end position within their offense and the success Alabama tight ends, Irv Smith and Hale Hentges, had last season was just the first step.

The next step in their plan is recruiting prospects, who fit their future scheme. This is why the Tide’s tight end coach Jeff Bank sat down one on one with 2020 4-Star tight end, Caden Clark, before last season to watch some film. They did not review any of Clark’s game footage or film from Alabama’s 2017 season. They instead look at practice video of then Alabama tight end, Irv Smith.

“Coach (Jeff) Banks and I sat down and watch tape on how they were using Irv Smith in practice. He told me that I had a similar build and I will be used in the same way,” Clark told Touchdown Alabama in November.

RELATED: Caden Clark believes Alabama is the best place for him

In the past, Alabama has been criticized for their lack of using tight ends in the passing game. With Alabama constantly having a loaded backfield and a heavy dependency on the run game, tight ends were mostly used as an extra blocker, which is a role former Alabama tight ends, Brad Smelley and Michael Williams, exceeded in. Alabama also did not have quarterbacks, who could light up the stat sheets with impressive passing yards.

That all change when Tua Tagovailoa threw the game-winning touchdown pass to Devonta Smith in the 2018 National Championship and created one of the greatest plays in college football history, “2nd and 26.” Tagovailoa’s success and passing performances in the 2018-2019 football season would further show what Alabama could do with the tight end position when they have a quarterback, who wants to sling the ball all over the field. Irv Smith was able to reel in 47 receptions for 710 yards and 10 touchdowns, which is more yards and touchdowns Michael Williams and Brad Smelley recorded their whole career at the University of Alabama.

With Alabama wanting to incorporate the tight end position more in their offense, they might have hit the jackpot with the talent at the position in the 2020 class. They will look to add at least two this cycle. They have a verbal commitment from Caden Clark and are targeting 5-star tight ends, Arik Gilbert and Darnell Washington,.

Gilbert took an official visit to Alabama in June. The Georgia product is listed as an athlete on most recruiting sites due to his ability to play multiple positions, including defensive end. Banks has not failed to inform Gilbert of what they are looking to do with the tight end position.

“He is basically saying that me and Irv Smith’s game is similar and I will fit into their system pretty well,” told Touchdown Alabama at the Nike Opening Regional.

Washington is another one of Alabama’s major tight end target. The massive prospect stands at 6-7 and weighs 261 pounds.

The Tide will look to show off the tight end position in their offense on this upcoming season as they also continue to recruit some of the top talent at the position.

Who commits to the Tide next?
2019 Player Spotlight: OL Emil Ekiyor Jr.
To Top
%d bloggers like this: