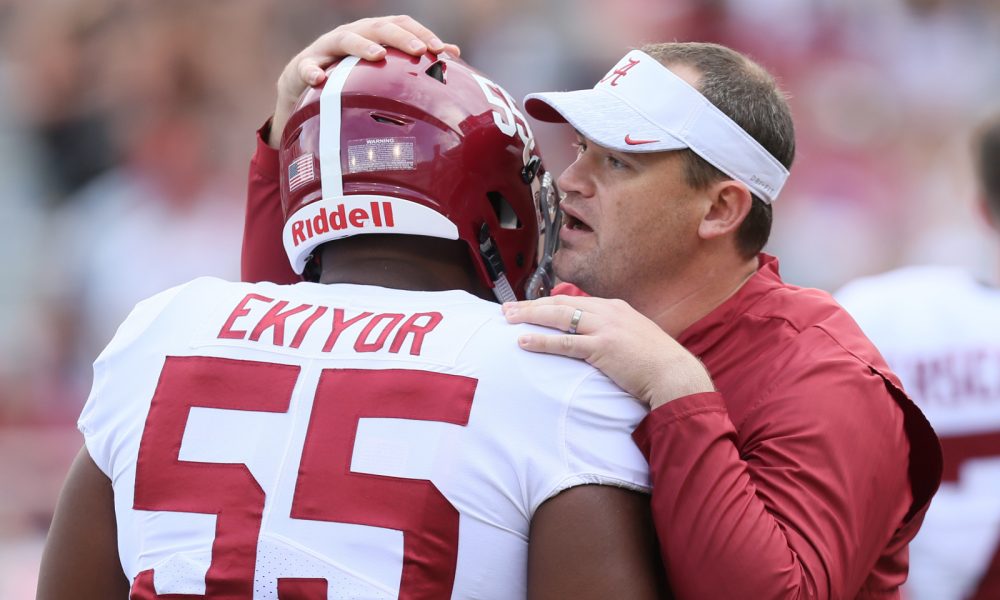 -2018 stats: Played in four games, prior to redshirting

Summary: Nick Saban was able to snatch the best offensive lineman prospect from Big Ten country in the 2018 cycle, as the Crimson Tide landed Emil Ekiyor Jr. from Indiana.

The four-star from Cathedral High School was rated No. 52 on the ESPN 300 and was the first U.S. Army All-American in the school’s history.

According to both 247Sports and 247Sports Composite, Ekiyor was highly regarded as a guard while ESPN and Rivals had him at center.

Listed at 6-foot-3 and 327 pounds, he is very comfortable at both positions and Saban raved about his versatility throughout spring practice.

He took reps at center and left guard, but a four-game suspension that Deonte Brown must serve will have Ekiyor slotted at guard.

Per sources, Touchdown Alabama Magazine was told about his lower body (core) strength and powerful hand strike. Ekiyor can drive guys off the ball in run blocking, as well as establish himself in pass protection.

He possesses quick feet for a player his size and with Alex Leatherwood moving to left tackle, Alabama looks to continue running off the left side.

Ekiyor saw action in four games last season, prior to taking a redshirt.

The Crimson Tide is anticipating a monster year from Ekiyor.

-Adjusting to a starting role

Summary: Should he continue to progress upon the start of fall practice, Ekiyor will start at left guard for a program that everyone else is chasing. Thoughts on how he’ll fare against top-tier competition is going through a lot of minds, including his own. Much is thrown at a first-year starter, especially one bold enough to play in the Southeastern Conference and at Alabama.

For starters, the best thing for Ekiyor is having more time on the field.

His expectations would consist of getting as many reps as possible, so that he can be comfortable and confident in his assignment.

With the Tide having three stellar backs, Ekiyor anticipates at least getting one to a 1,000-yard rushing year. To pair with this, he expects to keep quarterback Tua Tagovailoa off the ground and helping him build off his production from last season.

Ekiyor intends on pushing the Tide to having a Joe Moore Award-winning group, especially seeing how national media is highlighting Georgia, Oregon, Central Florida, Clemson and Auburn over the Crimson Tide.

If he becomes part of the conversation for individual honors, it will enhance Ekiyor’s status but the main goal is getting Alabama back to the CFP title stage.

Proving to Saban, the coaching staff and his teammates that he can excel at both run blocking and pass protection will be on Ekiyor’s agenda as fall camp arrives next month.

He plans on being one of the guys to cushion the blow of losing Jonah Williams and Ross Pierschbacher to the NFL Draft.

He has a lot to learn, Ekiyor brings a much-needed skillset.

His versatility could open doors for him sooner than later, if in the event Chris Owens struggles at the center position. Alabama could kick him over to left guard and let someone who mastered both roles in high school try to have a seamless transition.

Fortunately for him, Ekiyor will eye Raekwon Davis, LaBryan Ray, Phidarian Mathis and DJ Dale across the ball throughout August camp.

This should prepare him for all stunts, blitzes or any other tactic used by a defensive coordinator in trying to offset the Tide’s offensive timing.

Kyle Flood has options to choose from in his first-year at Alabama as offensive line coach, and Ekiyor is looking to be a primary one.

His first taste of action will be against Duke in Atlanta (Mercedes-Benz Stadium) and head coach David Cutcliffe should have the Blue Devils ready.

This is going to be a huge season for Ekiyor.