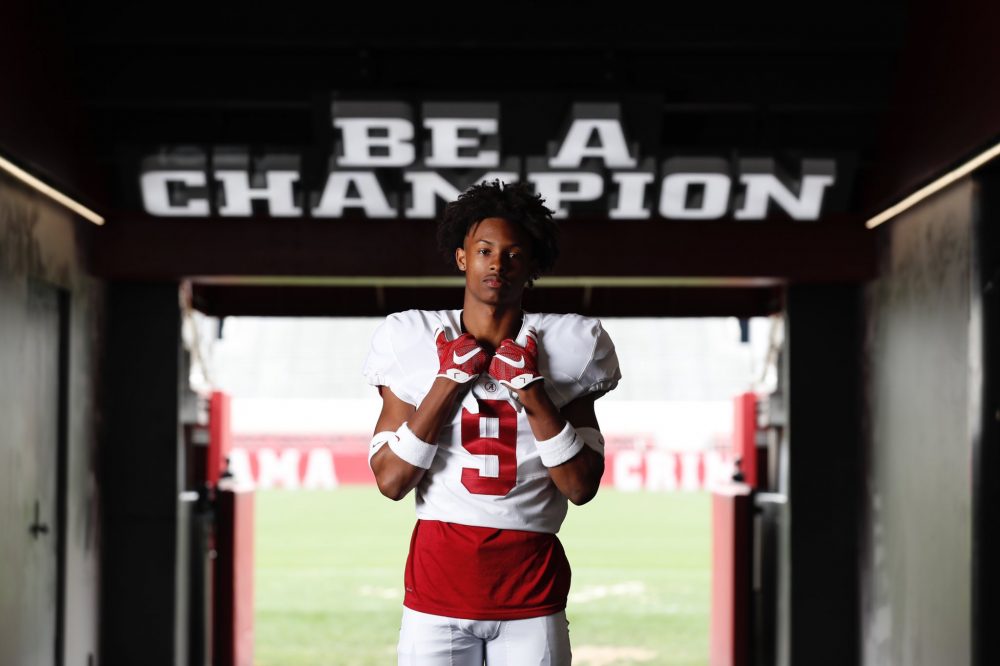 Alabama’s 2020 recruiting class will continue the Tide’s trend of loading up on defensive backs as their current group is powered by five 4-Star commits.

Malachi Moore, Jahquez Robinson, Brian Branch and Javier Morton are the Tide’s defensive back commits. Kristian Story, who is listed as an athlete on most recruiting sites, could also see some time in Alabama’s secondary.

Nick Saban takes the defensive back group under his wing each season and has shown, he wants to get as many talented DBs to Tuscaloosa as possible. Alabama landed five defensive backs in their 2018 and 2019 recruiting classes. Those classes have their fair share of great athletes, but the Tide’s 2020 class has a lot to offer as well.

This class is lead by strong Alabama commit and Hewitt-Trussville product, Malachi Moore. Moore has put on some muscles this offseason and is expected to see an expanded role in the Huskies’ defense this upcoming season. The senior defensive back is physical at the cornerback position. He did not see much action during his junior season due to teams throwing away from him at times.

Georgia product, Javier Morton, is Alabama’s longest-standing 2020 commit. Morton has a long and thick frame, which gives him the advantage over smaller wide receivers. The 4-Star recruit is most effective at coming downhill to make plays on the ball. Morton expressed to Touchdown Alabama in March, he does not see anybody flipping him from the Tide, but there are now some concerns surrounding if Alabama can keep Morton’s commitment since his last visit to Tuscaloosa was in April.

Jahquez Robinson brings a lengthy frame to Alabama’s defensive back class. Robinson’s biggest asset is his ability to go to stride to stride with great wide receivers. Playing high school football inside the state of Florida is also a plus for Robinson as he gets to go up against some of the best players in the nation every week.

Safety, Brian Branch, is an explosive playmaker, who can turn interceptions into pick-sixes with his impressive ball-carrying ability and open-field vision. Many feel he draws a comparison to former Alabama safety, Eddie Jackson.

Kristian Story is Alabama’s latest commit. The Lanett High School product lines up at quarterback and defensive back for the Panthers. Story has also seen some time at the wide receiver position during his career. Alabama is getting a prospect, who could be to utilize in a variety of roles and worked out at different positions.

The Tide is not done targeting defensive backs. One of their 4-Star targets, Joel Williams, is set to commit on Sept. 9. Another one of their top targets is 4-Star JUCO product, Nadab Joseph.

Only time will tell how good Alabama’s 2020 class will be, but this group of prospects have a huge upside. It will be interesting to see how Saban and company use them once they step on campus.

Alabama’s Last Practice Before Saturday Scrimmage
Competition at inside linebacker heating up for Alabama
To Top
%d bloggers like this: