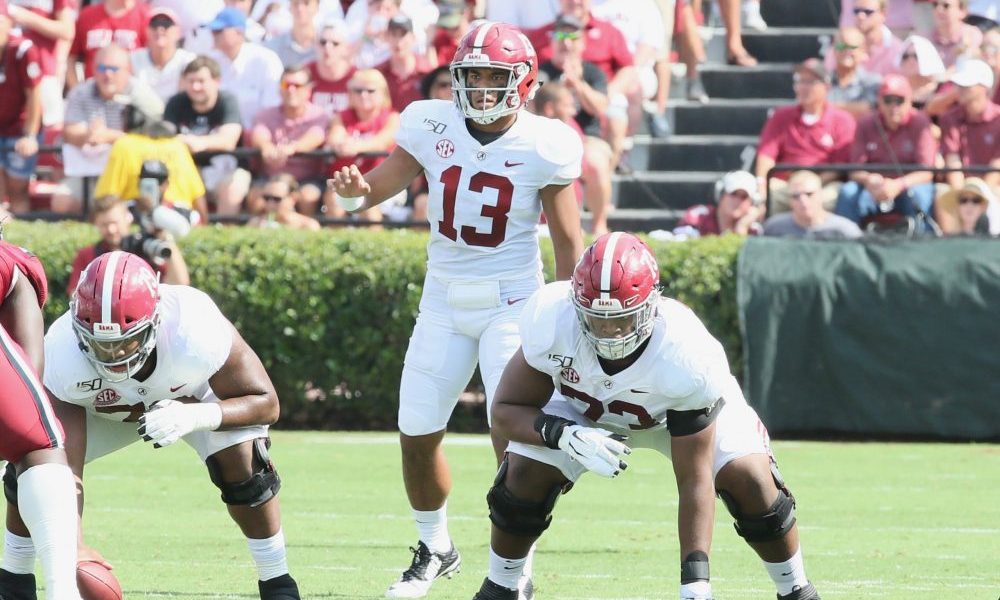 The last time Nick Saban and the Alabama crimson tide took a trip to South Carolina it ended with one of the bigger upsets in the Saban era as the gamecocks won 35-10. This time around it was a different story as Alabama was able win a tough road game 47-23.

Quarterback Tua Tagovailoa was sensational yet again completing 28/36 passes for 444 yards and 5 touchdowns setting career highs across the board. Wide receivers DeVonta Smith and Henry Ruggs III were also big fixtures in the passing game. Each had their moment to burn defenders in the open field as both took short passes for 40 plus yard touchdowns. Ruggs in particular took a slant route 81-yards to the house.

Jerry Jeudy turned in a bit of a quiet performance but South Carolina head coach Will Muschamp obviously made it a point to try and contain the junior. Jeudy finished the game with six catches for 68 yards.

Heading into the game one of the bigger questions on Alabama’s offense was the team’s performance of the running backs. Although there it still was not what coach Saban was looking for junior running back Najee Harris left his stamp on the game. On a play, which will surely make the end of the season highlight reel, Harris took a short crossing pass on fourth down and ran for a 42-yard score while breaking tackles and hurdling defenders.

Harris finished the game with 36 rushing yards and 5 catches for 87 yards and 2 touchdowns.

Despite the points given up by South Carolina’s defense, freshman quarterback Ryan Hilinski was able to command the offense and put together some nice drives on Alabama’s defense. Hilinski’s poise along with the tempo of play calling caused some problems for the crimson tide’s young linebackers Shane Lee and Christian Harris.

South Carolina’s offense took multiple drives into the red zone but when the pressure was on, Pete Golding’s defense was able to hang in there tough. There were two stops on defense which were truly the turning points in the game.

The goal line stand before the end of the first half and the forced fumble by senior outside linebacker Anfernee Jennings took all momentum away from the gamecocks.

Safety Xavier McKinney picked up some of the slack throughout the game as well, finishing the game with a team high 9 tackles and an interception.

Alabama’s defense didn’t come out of the contest unscathed as defensive lineman LaBryan Ray had to exit the game with injury and senior Raekwon Davis picked up an injury to start the third quarter but remained in the game.

Both injuries effected the team’s rush defense in the second half as running back Bryan Edwards found the creases in defense finishing with 102 yards on the ground.

Freshman kicker Will Reichard had a decent showing going 2/3 with all kicks inside of 40 yards but also missed his first PAT of the year.

Although the score was lopsided, the crimson tide had to work a bit on the defensive side of the ball to earn the victory as Nick Saban is now 17-0 against his former assistant coaches.

Alabama running game not producing in the first half
WATCH: Nick Saban provides thoughts on Alabama-USC matchup
To Top
%d bloggers like this: