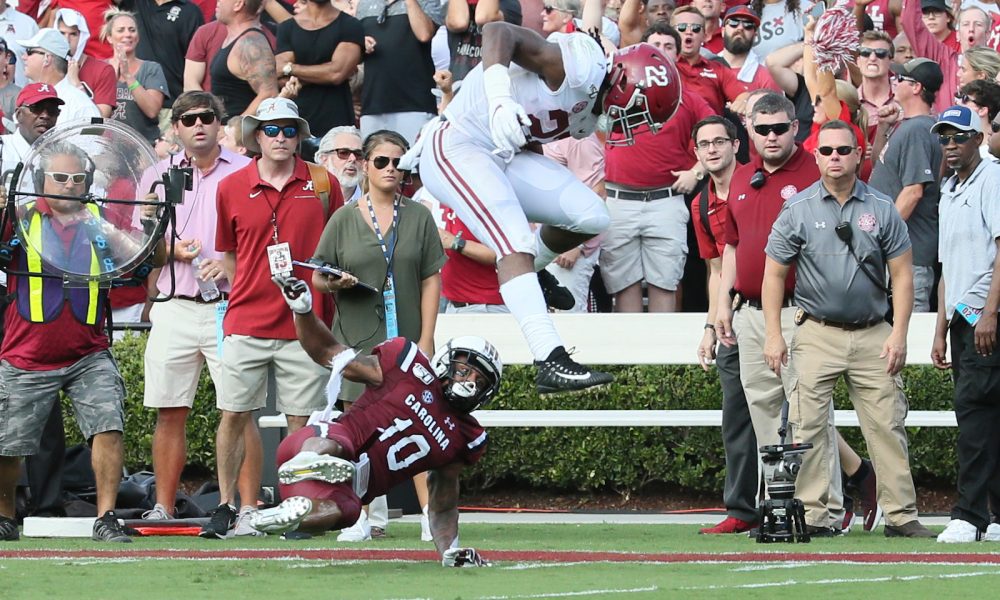 Nick Saban saw versus South Carolina that sometimes a player must respond on instincts.

Alabama running back, Najee Harris loves hurdling over defenders. Like a track athlete, timing those moments come natural for him. A five-star from California in the 2017 class, he does not possess all the attributes of a runner that Derrick Henry had yet today’s style of college football perfectly fits Harris. No matter how good he is at making highlight plays, Saban never wants to see a hurdling attempt go wrong for the junior.

He was against Harris using his signature move this season and California’s “Mr. Football” told reporters that he was giving up hurdling. While broken promises are never a good thing, it was awesome to witness Harris’ athletic feat versus the Gamecocks. Alabama held a 17-10 lead in the second quarter, following a made 23-yard field goal from Will Reichard.

After its defense recorded a stop, the Crimson Tide’s offense went on a seven-play, 65-yard drive that took 4:12 off the clock.

It was a mixture of three passes and three runs on the drive, but the seventh play brought Tide fans to their feet at Williams-Brice Stadium and had supporters of the Gamecocks using language that won’t be placed into this article. Harris grabbed what looked like a 5-yard pass from Tua Tagovailoa on fourth down with three yards to go. As he turned to make his moves, feelings from the last two years at Alabama and moments from high school instantly took over.

He gave one defender a mean stiff arm to the ground, hurdled another tackler, and somehow maintained balance to record a 42-yard touchdown.

The sheer athleticism had numerous commentators from CBS, ESPN and surrounding areas with their jaws on the floor.

For those who missed the Najee Harris touchdown live. pic.twitter.com/tEvJvTDS86

Harris would find himself on SportsCenter Top 10 Plays that night, as it will be a candidate for Play of the Year. He totaled just 36 yards as a runner (5.1 yards a carry) on seven attempts; however, catching passes from Tagovailoa makes him an added weapon for opposing defensive coordinators. Harris was targeted five times and caught all five passes for 87 receiving yards.

He finished with 123 yards from scrimmage on 12 touches with one score.

Even in Alabama getting a 47-23 victory, Saban is still not fond of Harris hurdling.

“I always tell him not to do that,” Saban said as reporters laughed. “I just think it could be dangerous, but he has a good feel for it.”

Saban said Harris along with the Tide’s other offensive skill players did a great job of being in sync with Tagovailoa in the passing game.

Although he wants to create more balance, the 67-year-old simply looked at the media and said ‘if it ain’t broke, don’t fix it.’ Much of its called runs in the run-pass-option (RPO) scheme resulted in Tagovailoa pulling the ball and throwing.

South Carolina had six players in the box and showed a Cover 6 look in the secondary, which provided the native Hawaiian and company with slant routes and timing patterns.

Hopefully, Alabama can find a good combination of linemen to jump start its rushing attack before the marquee competition arrives. For now, Harris enjoys his return to hurdling and the Crimson Tide gets prepared to host Southern Mississippi this week at Bryant-Denny Stadium.