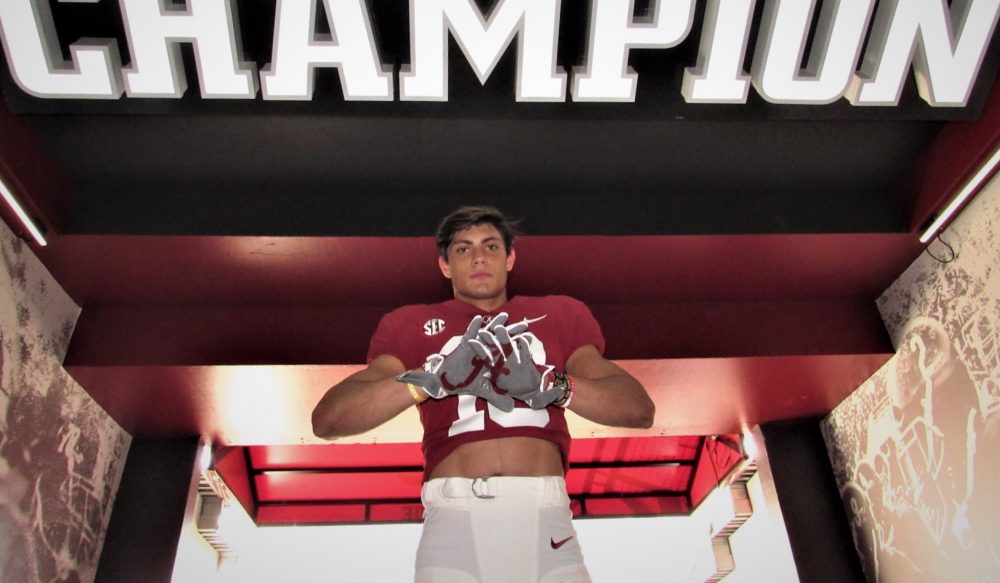 2021 wide receiver, Troy Stellato, took his first visit to Alabama on Saturday and the 2021 recruit said he could feel the Tide’s winning tradition.

Had a great time visiting The University of Alabama🐘🔴⚪️ thank you @SP_RisingTide for showing us a great time #RollTide pic.twitter.com/eVaQHlQSnk

Stellato is a 3-Star wide receiver out of Cardinal Gibbons High School in Fort Lauderdale, Florida. Stellato’s recruitment is currently on fire as he pulled in 12 offers in the month of September alone. The Florida product said he felt the atmosphere was great in Tuscaloosa on Saturday.

“The atmosphere was crazy,” Stellato said. “It would be surreal playing there.”

Alabama’s winning tradition shined bright in their big win over SEC opponent, Ole Miss. This was the highlight of Stellato’s visit. The 3-Star recruit said you can just feel Alabama’s tradition.

“The way that Alabama runs their program is truly remarkable,” Stellato said “You can just feel the winning mentality.”

Stellato received an offer from Alabama on Sept. 20. Alabama’s running back coach, Charles Huff, informed him of his offer. Stellato told Touchdown Alabama, he was stocked to receive  he offer.

“I was stoked,” Stellato said. “Alabama is one of the top two teams in the nation and for them to offer me is just a blessing. I have worked so hard to get here.”

At the Nike Opening Final Regional Miami, Stellato reportedly ran a 4.42 in the 40-yard dash, which is impressive for any skilled player. Similar to the way Alabama uses their current wideouts, Cardinal Gibbons likes to give Stellato the ball in space and let him make plays with his feet. His experience at picking up yards after the catch could make a possible transition to Alabama for Steallto a smoother one.

Alabama looks to be a contender in the race to land Stellato at the moment as they have a history of landing great wide receivers from the state of Florida.

Alabama-Ole Miss Top 10 Plays
Where’s Waddle? Alabama’s dynamic receivers lost among the others
To Top
%d bloggers like this: