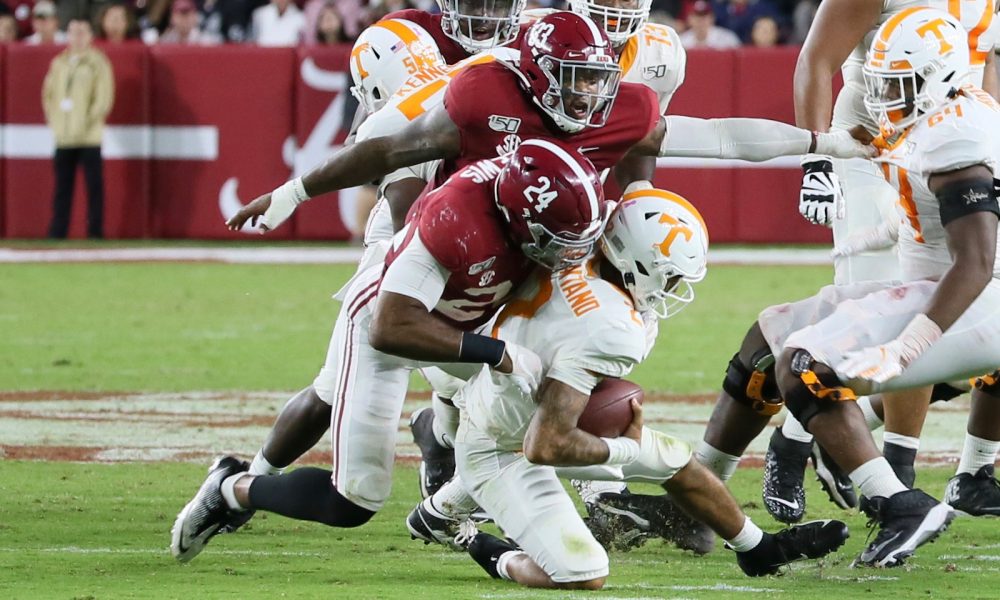 The lingering effects of injuries he’s had in the last two years are gone.

After not playing much against South Carolina and being held out versus Southern Mississippi, Terrell Lewis decided to throw caution to the wind and not take this moment for granted.

Fans of Alabama football and NFL Draft analysts were concerned about his production to start the season; however, the junior has washed away all doubts in the last three weeks.

When he is one with his wife – the football – the former five-star has a way of locking into a zone that ignites his teammates and creates trouble for opposition. His surge started with a sack versus Mississippi at Bryant-Denny Stadium, but the last two games have been a revelation of what happens when the entire defense locks in. Lewis was the ringleader of an all-out drubbing of Texas A&M quarterback, Kellen Mond, being responsible for two of the Tide’s five sacks in a 47-28 victory over Jimbo Fisher and the Aggies at Kyle Field. No one will debate against the LED lighting feature unveiled last week, but everything is better with a sack party via Lewis.

This was the funniest thing today.

A native of Washington D.C., Lewis also collected seven total tackles – including three for loss. As he stands with the lead in tackles for loss (nine), sacks (six) and quarterback pressures (six) for the Tide in seven games, the marquee edge rusher is back in the conversation of being a top-15 selection for next year’s draft. His ability to block out everything else and focus on the quarterback has the Mike Tyson impersonator leading the Southeastern Conference in sacks.

Prior to his late push, Alabama accounted for 13 sacks as a defense.

Lewis has pushed the number to 18 and with young players growing in confidence, the mark looks to continue rising. Some knew he was a difference maker upon his arrival to Alabama, while others connected the dots after seeing a video of him lifting his leg after a surgery.

One thing for certain is Anfernee Jennings is happy to have his brother back.

Playing both guys on the edge has brought an intensity to the team. With it hosting Arkansas for homecoming, Lewis will seize an opportunity to drag Nick Starkel. Many critics have voiced their opinions about this group; however, they have yet to see the Tide in full stride this season.

In everything, he knows he’s been given a second shot at football.

As we prepare for a photo finish through the remainder of the year, expect for Lewis to increase his hunger to take over games.