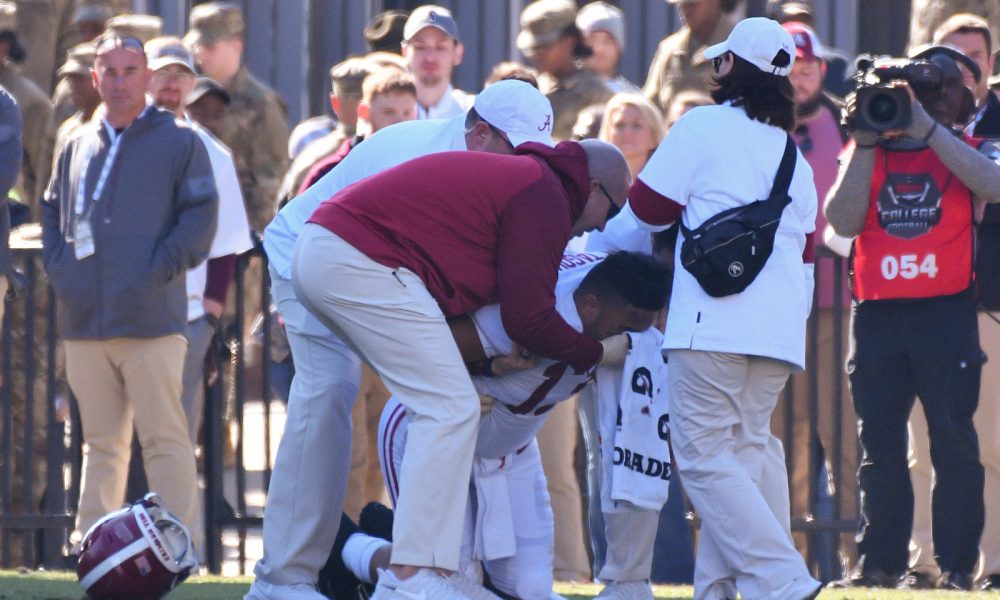 His future in the pros is in doubt, but that’s the least of the worries.

Alabama quarterback, Tua Tagovailoa went down with an injury in the second quarter against Mississippi State. He remained on the ground for a while and upon being helped up, he was in great pain. A towel covered his face as Jeff Allen, the Crimson Tide’s athletic trainer, was by his side.

Moments later, a golf cart made its way onto the field to carry Tagovailoa to a helicopter that was sent to transport him to St. Vincent’s Medical Center in Birmingham, Ala.

Despite a 38-7 victory for Alabama, the concern was for the junior signal caller. Nick Saban confirmed with reporters that the mishap is indeed a hip injury and Tagovailoa will be further evaluated.

He coined it ‘a freak incident.’

For the first time in Crimson Tide history, fans had a dynamic quarterback of its own. While it valued those who managed the game such as AJ McCarron, Greg McElroy, Jacob Coker and John Parker Wilson, Tagovailoa was different.

The native Hawaiian transformed the culture.

A former five-star, he came off the bench in the 2018 College Football Playoff National Championship Game and rescued the team to a national title. Since then, the exploits he has shown with his arm and his leadership have been second to none. He has suffered some injuries in his career; however, none of which were like these last two. Tagovailoa went down with a twisted right ankle versus Tennessee and went through a tightrope procedure to repair it.

Twenty days later, he has back under center against LSU.

He did not have to play in the game, but for those that understand the Samoan culture, they are strong about family. Tagovailoa looks at Saban like a father and his teammates as brothers.

Regardless of him limping around Bryant-Denny Stadium, he gave fans everything he had.

Tagovailoa threw for 418 yards and four touchdowns. He did not do much in practice this week and many felt as though Saban should have rested him, but the “warrior” in him does not allow him to sit back. According to Saban, he looked good in pregame warmups and the staff decided to start him versus the Bulldogs. He would account for two touchdown passes, but after the injury, fans are simply holding their breath that he is okay.

NFL scouts left the game moments after he went down, so conversations on his durability are about to spike back up via national media.

Laying everything else aside, Tagovailoa really needs the support of his fans.

With rumors being as severe as a potential fracture to his hip, he needs your prayers.