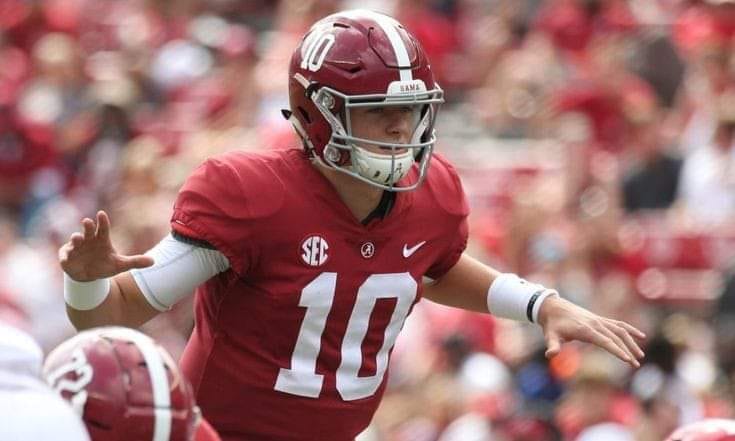 It’s not just Mac Jones that Alabama fans have to believe in now, it’s much more than that. Alabama as a team has been handed an “opportunity” to do something fantastic that could be immortalized in an already storied history.

It’s not just Mac Jones that Alabama fans have to believe in now, it’s much more than that. Alabama as a team has been handed an “opportunity” to do something fantastic that could be immortalized in an already storied history.

Everyone has seen Mac Jones throw the deep ball with precision. We’ve all seen him hit the quick slants, the fades and the deep out patterns. He’s got the arm to do them all. But like the Alabama fans, he just has to believe in himself.

We’ve seen this defense rise to the occasion when it has to time and time again. Yes it’s much maligned, yes it got burned in the LSU game. But there are players on this unit that 129 other division one teams would kill to have in their uniform. Give them a chance to become great, believe in them and let them believe in themselves and let history unfold.

Sarkisian, as the Bama offensive coordinator, you’ve limited the playbook for Mac in the past, now it’s time for you to believe in him too. Open the book, you’ve got two weeks to polish this guy and he’s more than ready and willing to have you throw anything at him. I know Mac Jones and I know he’s got this. He’s the same guy who beat both Tua and Jalen Hurts in the last two A Day games when someone else told him to just go out there and sling it around. Again, he’s got this. If you have the faith in him that I think he has in himself and that we want the fans to have in him, is it too much to ask you to get on board too?

In all the years I’ve spent talking to Alabama players under the Nick Saban era, the word “opportunity” is a word that is ingrained in them that was never there before under other coaches. They learn to call playing time an “opportunity”. Even the special team players will say, “When we have an opportunity, we make the most of it.” in talking about their limited playing time. Each believes that in just those few plays the difference of the game could be made, be it a fumble knocked loose, a block made that springs a punt return or a game saving tackle. I’ve looked in their eyes when they’ve said these things and they honestly and almost religiously believe it. And these are just the special team players, usually freshmen who still haven’t earned a better spot.

Alabama is a unique team. No team has dominated an entire decade of football as has Alabama and the reason is simple. It is all based belief.

The average fan across across American may not have an idea how firmly this team is based on faith. The strong Alabama fans see it, they kneel before, during and after the games and profess their belief in God. They unashamedly hug on another constantly because of their belief in the brotherhood on this team. They have won and will continue to win at historic levels because of their belief in their coach and his “process”. They don’t go into games with doubts and the only fear they have is that they may fail to live up to the faith that the other 84 players have in them to do their job to the best of their ability on every single play of the game. This is and will always be a team where, “I’ve got your back!” is not just words.

I know this team will squeeze shoulder to shoulder a little closer in the upcoming weeks, they’ll tighten the circle even more and they won’t doubt one another. The question is, will the fans be as forgiving and as steadfast in their beliefs?

Now is not the time to point fingers and blame Saban or Tua for him finishing the first half of last weekend’s game. Both were doing what was best for the team and to knock some rust off. It’s called fate and no one controls that. So you can either continue to cry over spilled milk or move on.

Personally, I think a new chapter in Alabama lore is about to be written and I can’t wait to see it being played out. I believe.