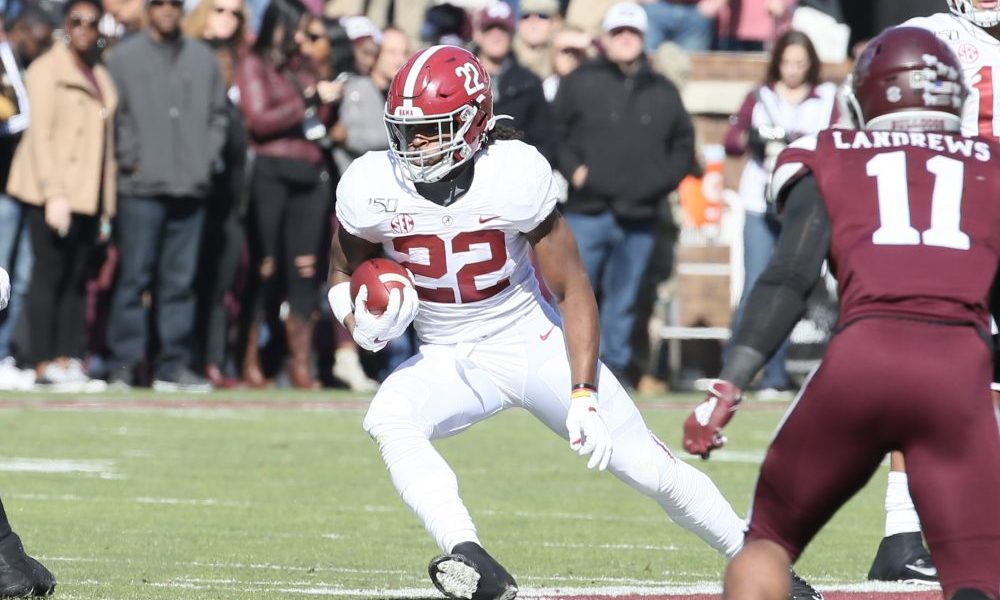 Once Tua Tagovailoa was announced to miss the rest of the regular season, backup quarterback Mac Jones was immediately put under a microscope. And for good reason. Jones, who previously stepped in fro Tagovailoa against Arkansas and showed what he is capable of doing in the passing game.

But as much as fans would like to invoke Jones to be the second coming of A.J. McCarron right from the start, those kinds of weights will still be found to be quite daunting on the shoulders of somebody who is going into his second career start. With Western Carolina arriving on Saturday, there shouldn’t be too much call for panic but the Iron Bowl is now certainly looking to be a much more competitive matchup now more so than two weeks ago.

With football being the ultimate team sport, it can’t just be up to Jones to step up and play like Superman every week. He needs help, which he will be getting in the form of junior running back Najee Harris.

RELATED: Jahleel Billingsley, Alabama TE, has ‘a lot of potential’, per Nick Saban

Harris is now unquestionably the most important player on Alabama’s offense since he is likely the only player who can take the pressure off of everybody else. If he is able to continue to run the ball at the level he has been over the past five games, it will bust the doors wide open for the passing game.

So far Harris’ 2019 campaign has been the best of his career, he’s already surpassed last season’s production with two more games left on the season. So far he’s rushed for 876 yards and nine touchdowns.

“I think he’s played really well. I think he’s improved as the season’s gone on and the last few games has played his best football of the year,” said head coach Nick Saban during his Wednesday teleconference. “I think a lot of it is just confidence, not really confidence in your ability to do things but confidence in your ability of, how do you press the hole, how do you run the runs that match up with the position of the offensive linemen relative to who they’re trying to block.”

Harris has not been one to attribute his success to extra motivation based on last season’s workload. He simply believes that he is finally getting his chance to showcase what he can do.

In his first two seasons at Alabama Harris split carries with multiple NFL running backs in Josh Jacobs (Raiders), Damien Harris (Patriots) and Bo Scarbrough (Lions). Now Harris is the unquestioned leader out of the backfield and will need to step up even more so without Tagovailoa.

Although Harris should be expected to receive some more touches, Saban still believes that the team’s offense will remain relatively the same with Jones lining up beside Harris.

“I don’t think the offense changes much at all,” said Saban during his post-game press conference after defeating Mississippi State. “Mac played in the Arkansas game and did a nice job. I think he was 18-for-22 of whatever. He’s made a lot of improvement throughout the course of the year.”

As much confidence, Saban will have in Jones moving forward there will likely still be a bit more of an emphasis on running the football. Saban is telling the truth when he says the offense will not change much. Offensive coordinator Steve Sarkisian will keep calling the same plays, he won’t be tweaking his playbook to simplify anything for Jones. But what will change is how often passing plays are called throughout the game.

During games where Tagovailoa has played the majority of, Alabama has passed the ball 273 times and handed it to a running back 213 times meaning the Crimson Tide have attempted 60 more passes than rushes when Tagovailoa is available to play. When Jones plays the majority of a game the offense has thrown the ball 54 times and ran it 69 times, a much more run-heavy approach.

In Jones’ lone start against Arkansas Alabama had 35 designed run plays compared to 30 passing plays. It is easily one of the team’s most balanced games on offense and also one of the more lopsided victories.

Where do Alabama commits play this week?
WATCH: Tua Tagovailoa arrives back in Tuscaloosa
To Top