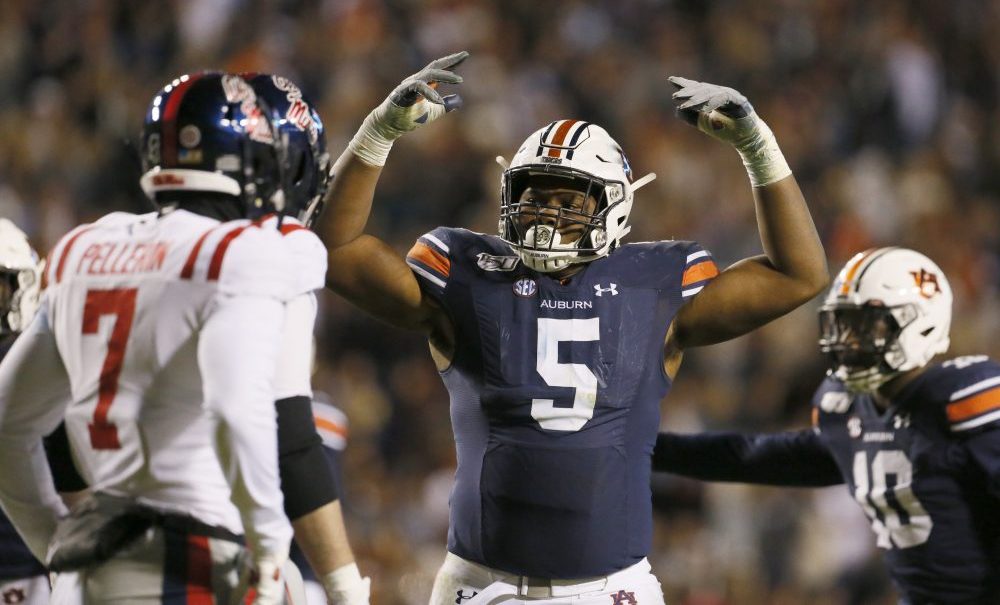 As the College football season is now entering its final week of the regular season every team is playing with a distinct sense of urgency. But there may be no other team who as much on the line this Saturday than Alabama. With the loss of Tua Tagovailoa as well as not having the opportunity to compete in the SEC championship game, the 2019 edition of the Iron Bowl once again has massive playoff implications.

In order for Alabama to take care of business this weekend against Auburn, the offensive line will need to win the battle up front against the Tigers defensive front which most other teams have had trouble doing.

Auburn’s defensive front has been dominant all season long especially against the run. Defensive coordinator Kevin Steele’s unit gives up just 72 rushing yards per game and only let up eight rushing touchdowns all season.

Although it has been very much a group effort, Alabama head coach Nick Saban will spend most of his time trying to scheme around defensive linemen Derrick Brown and Marlon Davidson.

Brown, a senior, has been one of the most disruptive defenders in college football this season. Taking pride in the dirty work for the Tigers, Brown has recorded 43 tackles, 9.0 tackles for loss, 4.0 sacks and four pass deflections. This kind of production from the middle of the defense is one of the reasons Brown is a finalist for the Chuck Bednarik Award and Outland Trophy.

“He’s had a huge impact on just about every game, in my opinion,” said Saban during his Monday press conference. “We’ve always thought a lot about him as a player and had a tremendous amount of respect for him. But he’s got great initial quickness. He plays with a lot of power, uses his hands well. He can disengage from blockers very quickly and push the pocket really well with the power rush.

“He’s a pretty complete player and as good a player as we’ve played against for a while around here as an inside player.”

With a lot of the attention going to Brown up front it seems as if Davidson almost flies under the radar when it comes to coverage. But his film and production speak for themselves as he has caused fits on the edge and is a solid complementary piece to Brown.

Davidson is tied with Anfernee Jennings and Calvin Taylor (Kentucky) for the SEC lead in sacks with 7.5 and has also reeled in 43 tackles, and 12.5 tackles for loss for the Tigers this season.

“I don’t think there’s any question about it. I think these two guys are really hard to block,” said Saban. “I think their whole front seven is really hard to block. They’re very physical. They play tough. They play together. They’re well coached. Kevin Steele has does a great job with them. So, they’re tied together well. You’re going to have to finish blocks. We’re going to have to play well together as a team to get a hat on a hat, and same thing in the passing game.

“It doesn’t matter whether it’s a run or a pass, those guys are pretty dominant players. This is the most challenging front we’ve played this year.”