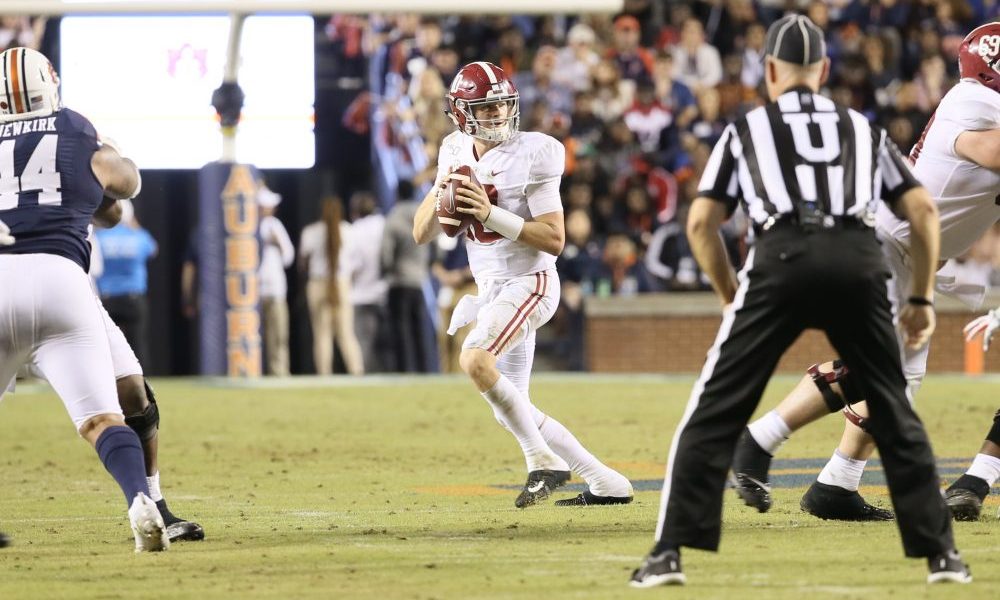 In his first career road start and first Iron Bowl as the main man, redshirt sophomore quarterback Mac Jones put together a resilient performance despite the hardships he faced throughout the contest.

Jones, who was starting his second game in a row after the season-ending injury to Tua Tagovailoa, had some self-inflicted wounds which put the Crimson Tide behind. Those wounds came in the form of two interceptions which were both returned for touchdowns that helped keep Auburn in the game long enough to prevail.

But after both mistakes, Jones had the same attitude and expression that Alabama looks for in its quarterbacks. He owned both mistakes and played unafraid afterward as he continued to challenge to Tigers secondary and found a great deal of success.

Jones’ guts and toughness resulted in completing 26/39 passes for 335 yards and four touchdowns.

This kind of showing didn’t go unnoticed by his teammates who praised him following the game and also head coach Nick Saban.

“I thought Mac played really well,” said Saban following the Iron Bowl. “We had 550 yards of offense. The offensive line did a great job of blocking. We had great balance. We were able to run the ball effectively in the game. We threw it and made some big plays.”

Not only did Jones receive praise from his current team but his performance also caught the attention of another former Alabama quarterback who wore number 10 as well.

So Proud of you @MacJones_10 Hold your head high brother. One hell of a game! Super proud that you’re rocking that 10 for the BEST damn school in the Nation. #RTR4LIFE

AJ McCarron knows a thing or two about winning games at Alabama as the current Houston Texans backup won consecutive national championships with the Crimson Tide. But McCarron knows what it’s like to lose a heartbreaker as well, for he was conducting the offense when Alabama lost to Auburn during the “Kick Six” game.

Even with the loss, Jones has proved to be more than advertised in terms of what he can do as a starter. The postseason may be out of reach for Alabama this season and the team is likely losing Tagovailoa to the draft, but after Saturday Jones showed that the offense is in good hands moving forward.

Alabama fans express what changes they feel need to happen in the immediate future
5-Star RB, Zachary Evans, has his commitment date set
To Top
%d bloggers like this: