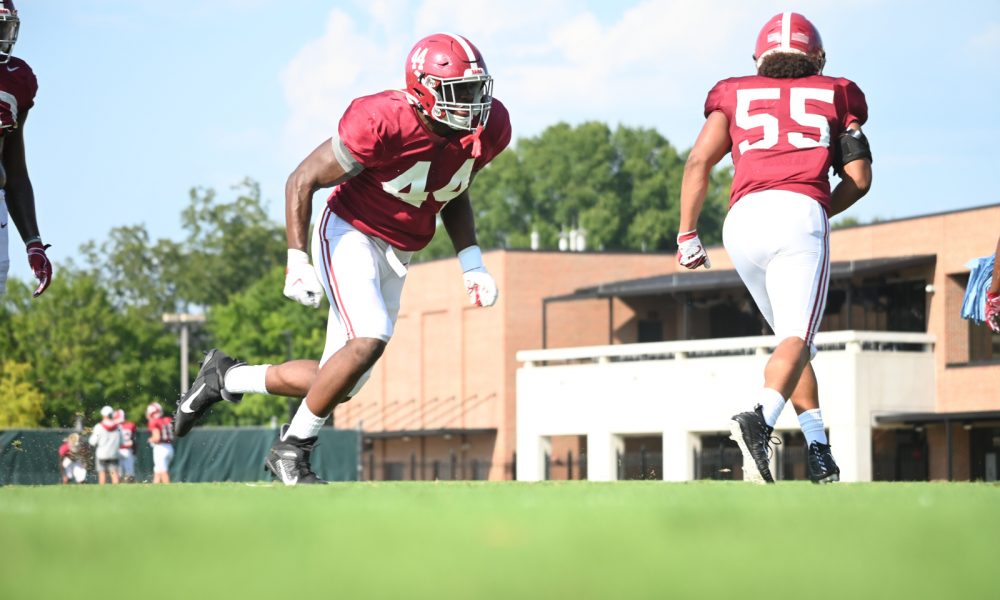 In his first 11 of 13 years at the University of Alabama, intense competition is what made Crimson Tide football a five-time national champion under Nick Saban.

From spring practice to fall camp, Alabama had its best players on the field. Defensively, the Tide was not only three-deep at each position but its backups were just as good as the starters.

After two seasons filled with questions and concerns, Saban looks to have the program back where it needs to be and that is winning national championships. Exceptional performances at jack/rush linebacker was a pivotal part of the trophy chase.

The purpose of this position, especially in Saban’s 3-4 defensive alignment, is to walk down as a fourth down lineman and come after the quarterback.

Anders’ sack of Garrett Gilbert of Texas in the 2010 BCS National Championship Game (2009 season) helped the Tide win its first title since 1992.

The duo of Williams and Anderson helped Alabama capture a CFP National Championship in 2015, while it put together arguably the fiercest group in 2015 and 2016.

If Miller would have been healthy for the 2019 CFP title game versus Clemson, he provides the pressure to Trevor Lawrence that the team lacked in the matchup. As for Lewis and Jennings, both guys were hampered by injuries; however, they were dynamic when healthy – especially Lewis.

So, who is in line to be the next great edge rusher?

Spring ball will give fans and media personnel a small taste, before fall practice and the 2020 regular season arrives for the Tide. Six names stand in the competition, including three true freshmen in Quandarrius Robinson, Will Anderson and Chris Braswell. All three players are five-star athletes, and Robinson hails from the state of Alabama (Birmingham).

The trio of King Mwikuta, Kevin Harris II and Jarez Parks are all experienced within the defensive system. Sal Sunseri, Alabama’s outside linebackers’ coach, put in time with each player because he sees something special in all of them.

When it comes to Mwikuta and Harris, both made huge strides throughout the 2019 season in practice and having the makings of becoming elite pass rushers.

Parks, who was supposed to come in the 2017 recruiting cycle, was emotional on television as he chose to accept a grayshirt and arrive in the following spring.

He played in five games last season and forced an interception against Ole Miss.

With Lewis and Jennings departing to the NFL Draft, one of these six individuals will win the starting role at jack.

Despite people liking the potential of Anderson, Robinson and Braswell, Mwikuta has the most killer instincts of the three already in the system.

It’s about to get entertaining again on defense, and it starts with locating a consistent sack specialist.