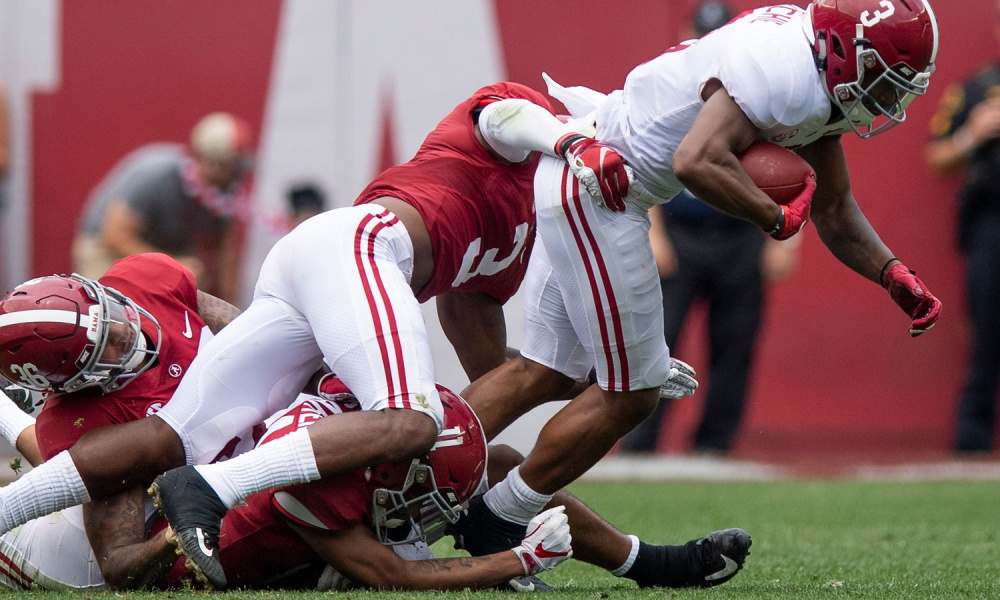 Yes you know Metchie from last year’s A day game MVP, but do you know the rest of the story that very few do? This is the story you’ve waited for. Enjoy!

Last season there was just so much insane talent at Alabama in the receiving corps, that a young freshman with a bright future just didn’t have a way to let his light shine in the regular season. That man was John Metchie III.

Oh, we all know him because he simply lit up the A day game in 2019 with a sensational preview of what he will be able to do in the future. In case you’ve forgotten, here’s some highlights.

And don’t forget what Saban had to say about Metchie after his 2019 A day game. Among some of the phrases were on things like “really going to help us next season”, “doesn’t drop balls” “did a great job” and “physical”.

Metchie’s path to Alabama has been unlike anyone else who’s ever donned the Crimson at Alabama. He is the first player to be born in Taiwan, but he moved to Ghana, Africa when he was young and then at the age of six, moved to Brampton, Canada near Toronto and he started playing football like his older brothers, one of which plays professional football in Canada today.

However, unlike his brothers, it was obvious even very early on that his talent was remarkable and it was easy to see was going to be something really special. If he wanted to pursue his dream of playing professional football in the NFL, his family knew he’d have to go the United States and play against better talent, so at the age of 14, he moved to Maryland to play his high school football at a boarding school, while his family stayed in Canada.

But in his freshman year in high school, he took a big hit to the chest and immediately noticed his heart was beating much harder than usual. Medical tests revealed he had an enlarged heart and he was forced to sit out the remainder of that year watching his buddies get to play. This was a difficult time, especially since his family was eight hours away in Canada and he went through his rehab without the love of his family to comfort him.

While he was used to moving and making new friends, this time it was without his parents and Metchie was forced to rely on himself more than ever and became a lot maturer a whole lot faster.

Instead of scaring him into worrying about football, it did the opposite. He realized what a gift it was to play football and he missed it so much he started working out to make himself the very best he could be. His coaches said he did early morning runs and more outside of practice and his work ethic was nothing they’d ever seen before.

Coming back into playing form the next season, he learned two very important things, that he could rely on himself to overcome big adversities and that gave him confidence in buckets he never had before. Secondly, that life without football was not much of a life and the dream of making big money in the NFL one day was still a dream, but maybe the bigger dream was just getting to play a game he loved so much.

St. James, the boarding high school he attended was not a football factory kind of program, but they did play some good teams that Metchie could test his abilities against. He played offense and defense, just a natural athlete, but it was receiving where he shined the brightest.

In four seasons with the St. James Saints, he totaled more than 1,300 rushing yards as a runner and 2,500 receiving yards for 42 touchdowns on offense, along with 10 interceptions and 19 pass deflections on defense and everyone who was anyone knew who Robert Metchie III was. All the big schools wanted him and wanted him now, but he was a year younger than the other seniors and decided on going to Peddie, a preparatory school in New Jersey, for a post-graduate year.

That wise decision got him mentally ready for the academic future he’d face at the next level. He finally decided on Alabama after turning down many of the nation’s top programs and enrolled early to get in some valuable spring practice and the results sure showed up in that year’s A day game you saw a few highlights of earlier.

In that A day game, Mechie led all receivers, yes including all the existing stars on the team, with 133 yards and earned the honor of being the MVP in that game.

When asked “why Alabama?” Metchie said he immediately felt comfortable with the other players on the team and of course finally getting the chance to compete against the very best in college football.

With the talent at Alabama, he didn’t get a lot playing time in his freshman year, but when he did, he was great. He didn’t know it at the time, but playing on the second team will help him a lot this year for one reason no one predicted could happen. Also playing on the number two team was quarterback Mack Jones and they developed a chemistry between themselves that was certainly obvious in that A day game. At that time, it was obvious that Metchie would one day be a starter, but no one at the time knew Jones would wind up the starting signal caller. But an injury to Tua Tagovailoa last season put Jones there after a transfer by Jalen Hurts shot Jones from the number three to number one.

Today, the pair are still great friends and in sync with one another on the field. You have to know a receiver’s mind to pair a quarterback with him and make that connection that extends into greatness and Jones knows how Metchie runs his routes, trusts him to put it up against tight coverage and all the other nuances that a receiver brings to the table. They just click together.

This season, Metchie won’t be a “new” receiver on the Tide’s team, he will be guy that Jones has thrown more passes to in practice than maybe any other guy. He’s already a veteran to his quarterback and will play like that on the team this season.

While the Tide still has two star receivers on the team from last season,  DeVonta Smith and Jaylen Waddle in front of Metchie, remember that last season the Tide had four star receivers on the team and the two big ones that left are sure early draft picks for this years NFL draft. That means that this season, there’s plenty of room for Mechie to get his chance to shine. He should be a solid number three on the team and his highlight footage days are coming.

It was a long road from Taiwan to Africa, to Canada and then Maryland to Alabama, but he is somewhere now that finally feels like home. His warmth with his teammates gives him a family feeling as he’s far removed from his natural one. And now it’s his time to shine and shine he will.