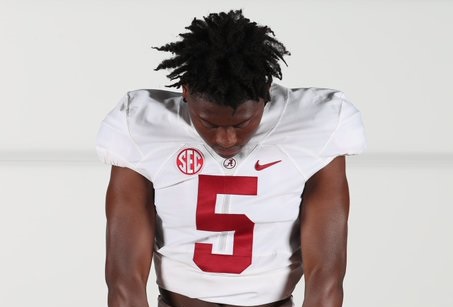 Alabama’s newest commit, Kaine Williams, made some history of his own Friday as he did not only become the Tide’s first defensive back commit in the 2021 recruiting class, he also became the first person to commit to the University of Alabama from John Ehret High School in Louisiana.

*FIRST* person to commit to The University of Alabama from John Ehret blessing!! BE DIFFERENT!!

Alabama has picked up four verbal commitments over the last 30 days with pledges from Agiye Hall, Anquin Barnes, Jacorey Brooks and Williams. Williams chose the Tide over SEC schools, LSU and Texas A&M, who were in his top three. With his commitment behind him, Williams is working to get better and putting his recruiting hat on.

It has been quite the last 24 hours for the rising senior. After announcing his commitment to Alabama Friday, it was back to work for the Tide’s newest commit as he was seen working through some cone drills Saturday morning.

After commit to one of the best schools in the world yesterday what we do the next day get that work 🐘🐘🐘🐘🐘🐘🐘🐘 pic.twitter.com/LGvI5A4Mk6

It also did not take long for Williams to show love to some of the recruits, who Alabama is targeting in the 2021 recruiting class. One of those targets was 4-Star wide receiver, Christian Leary, who is set to announce his commitment in June, The Tide looks to be a serious contender for his commitment at this moment.

RELATED: What does Kaine Williams bring to the table?

To add to the recent exciting events Williams has experienced, former Alabama defensive back and New York Giants safety, Xavier McKinney, showed Williams some support and told him to “carry the torch.”

There’s no place like it. Carry the torch bro! #RollTide https://t.co/4MW7jlLtCt

Alabama’s 2021 recruiting class continues to pick up steam heading into the summer. Williams is the Tide’s second verbal commit in less than two weeks.

Alabama’s QB talk for 2020 taking on form of A.J. McCarron-Phillip Sims from 2011
Alabama WR John Metchie building on his connection with Mac Jones
To Top
%d bloggers like this: