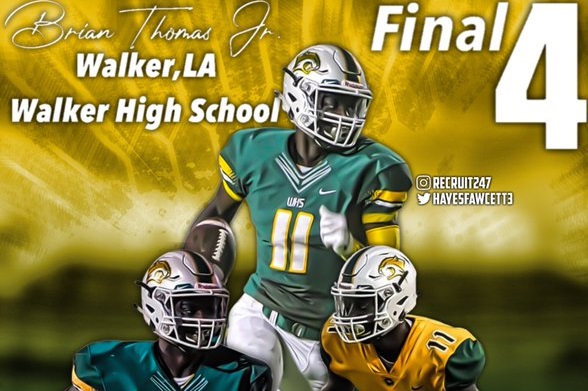 Thomas is a product of Walker County High School in Walker, Louisiana. The Tide offered him in November of 2018 and has remained one of his top teams. Alabama last hosted Thomas for its Junior Day event in February.

The Tide has two verbal commitments from 2021 wide receivers and is looking to add two or possibly three more. With pledges from Agiye Hall and Jacorey Brooks, Alabama has commitments from wideouts, who stand at 6-3. Thomas brings a long frame to the table as well standing at 6-4 and weighing more than 180 pounds.

As a junior, Thomas had more than 1500 receiving yards en route to pulling in 17 receptions for touchdowns. His unique combination of speed and length makes him a mismatch against most high school defensive backs.

Playing both basketball and football is a possibility for Thomas at the next level as he has a couple of basketball offers as well. The Tide has yet to offer him in both sports, but have shown they are willing to by offering 2021 targets, GaQuincy McKinstry and Terrion Arnold, in both sports.

Thomas has not announced a decision date yet.