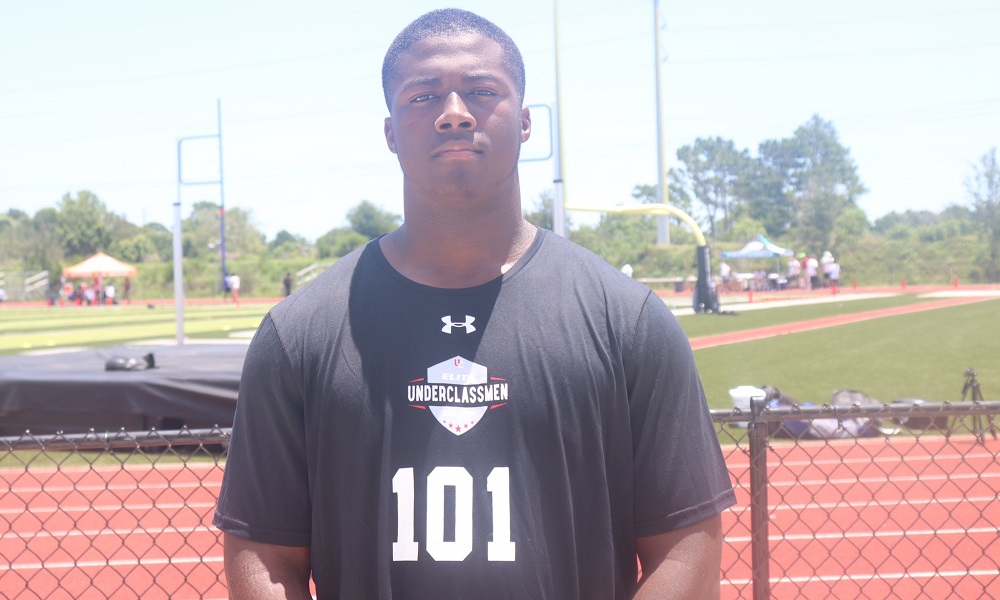 2022 defensive end, Gabriel Brownlow-Dindy, currently has multiple D1 offers and that number is expected to grow after he stole the show at the Elite Underclassmen Camp in Jacksonville, Florida Saturday.

38 in vertical and a 4.8 40 laser time at 6-4 and 270 lbs plus. Has several offers on hand. Visited Alabama in August. More on him will be @TDAlabamaMag pic.twitter.com/mmimPsHb2S

Dindy, who currently comes in at 6-4 and weighs 274 pounds, tested through the roof at the camp during the measurement portion. His 40-yard dash time was impressive as he ran a 4.8 laser time and so was his vertical jump as he jumped 38 inches. Since 63 of the 65 Power 5 programs will receive measurements and videos from the camp, it is clear Dindy’s offer list will rise soon. The Oklahoma Sooners quickly jumped on the Dindy train after his camp performance.

Alabama has hosted Dindy in the past and could soon put their name in the hat for his services. The Lakeland High School (FL) product said he does have some interest in the Tide.

“They are one of the best,” Dindy said. “Nick Saban is there doing work and he knows how to get his players ready.”

When Alabama hosted Dindy, he was impressed with the different facilities and the nutrition plan the University of Alabama has in place for its student-athletes.

“Everything was good,” Dindy added. “I was really impressed with their facilities, their workout room and how they had their athletes’ food plan all laid out.”

Several underclassmen were in attendance at the camp in Florida, including several defensive linemen, who hold offers from Alabama. Dindy outperformed most of the field with his athleticism and received an invite to 2022 Under Armor Future 50 camp in Orlando, Florida at the conclusion of the camp. The rising junior said his performance at the camp was a result of the work he has put in.

“I see it as hard work paying off,” Dindy said. “I have been working hard trying to get this and I finally got it.”

As a sophomore, Dindy proved to be a hard defender to block as he never stops his pursuit on the rush. His game also includes a wide range of rush moves. The Florida prospect could be seen spinning and using hands to get past blockers.

Alabama has offered a good number of 2022 prospects, including Dindy’s teammate, Keahnist Thompson.