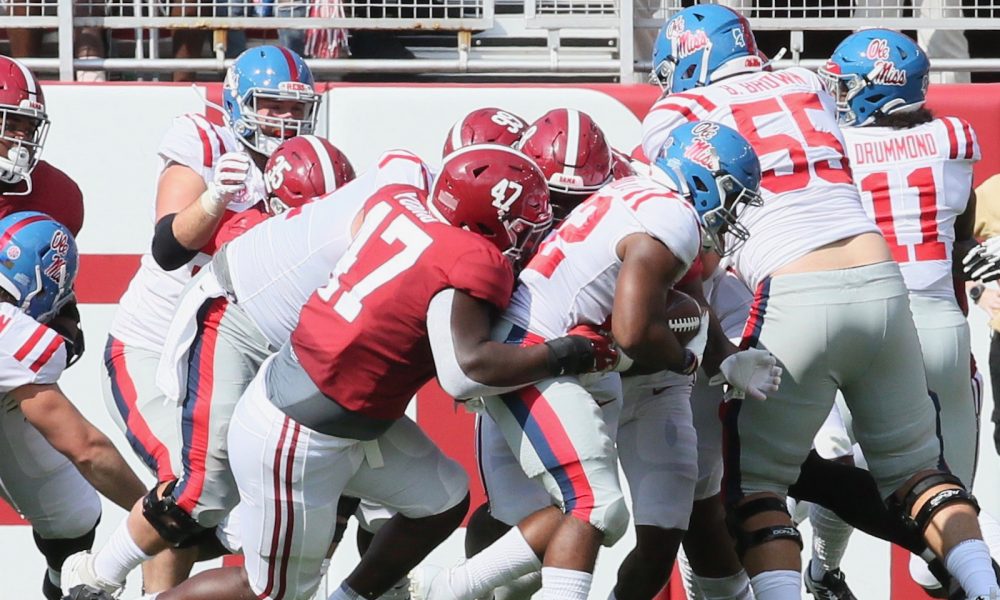 The state of Mississippi came under fire on Monday.

Shortly after the murders of Ahmaud Arbery, Breonna Taylor and George Floyd due to racial injustice and police brutality, the University of Alabama and its student-body swiftly began the process of removing all confederate monuments and renaming all buildings that provided racial history.

RELATED: No Alabama football season could result in $2 billion loss for Tuscaloosa according to Mayor Walt Maddox

With so many athletic venues banning the appearance of the confederate flag and institutions removing it because of its meaning, all eyes have been on Mississippi to see how its legislature would approach the situation.

Kylin Hill, a native of the state and star running back at Mississippi State University, is against the flag and wants it removed. Like other marquee collegiate and professional athletes, Hill used his social media platform to speak out.

The rising junior said he would no longer represent the state, unless the flag is removed.

Either change the flag or I won’t be representing this State anymore ? & I meant that .. I’m tired https://t.co/IzizpWLoIg

Despite the support he has received from former Bulldog standouts KJ Wright and Willie Gay and current players Brandon Cunningham and Marcus Murphy, some Mississippians see no issues with the flag and are against Hill.

You have my full support brotha! That flag represents hate, racism, oppression! It’s BEEN TIME for a change. There’s strength in numbers! We all have to be on board https://t.co/2d73tRDEiI

If about 10-15 main players stood with @H_Kylin from all Mississippi schools that flag would be down tomorrow!!! Stand for something or fall for anything!!! THEY(NEED‼️‼️)US BELIEVE THAT‼️

& we from Ms… we gone stand for something but NOT fall for anything?I’m wit ya 8 https://t.co/LxStJERmqb

Even O’Shea Jackson, better known as “Ice Cube,” had something to say. The proclaimed godfather of gangsta/political rap also stands on the side of Hill and all athletes fighting injustice.

According to a tweet from Samaria Terry, a sports anchor/reporter for WJTV Channel 12 in Mississippi, residents of the state are telling the leading rusher of the Southeastern Conference that MSU does not need him.

Mississippians telling the SEC’s leading rusher that MSU doesn’t need him because he’s dislikes the confederate flag is very telling.

In all the commotion, another native Mississippian spoke out.

He is preparing for a monster sophomore season after a strong first year; however, he is very conscious about the state of the country. Upon the murder of Floyd, Young became the first Tide player to speak out in wanting a response from the program.

Not only did the likes of Dr. Stuart Bell (president), Nick Saban and Greg Bryne (athletics director) address the issue, but a number of players have been in support of the “Black Lives Matter” movement and getting certain statues or monuments removed from the campus.

On Tuesday, Young quote tweeted Terry’s statement in saying the best thing he ever did was leave the state of Mississippi.

Best thing I did was leave that state. https://t.co/zHNaHe3py8

Per an article from the Clarion Ledger, Gov. Tate Reeves does not think the idea of creating a second Mississippi state flag is a viable option.

He tweeted on Monday that a proposal was floating amongst some in the legislature to create a second flag called “Separate, but Equal.”

While stating that it would be well-intentioned, it does not meet the threshold.

As much as he does not want to see any more division of the state, Reeves said he did warn residents of Mississippi over the last few years that any attempts to change the state flag would be met with contempt.

“If the leadership in 2001 had not put it on the ballot, then the conversation may be different,” Reeves said. “But they did. And therefore, we must work together to find a solution where, when everyone has their say, we can come back together as a family and prosper. We must work together to find a solution that, once all is said and done, unites us as a people proud of our future! I’ve been thinking and praying hard about the best way to accomplish that.”

Reflecting back to the Clarion Ledger article, about 64 percent of voters voted against changing the flag in 2001.

Hill is the second prominent player from a power five school to say he would not represent an institution if changes were not made. Chubba Hubbard of Oklahoma State held his head coach, Mike Gundy, accountable after a photo of him wearing an “OAN” shirt surfaced on Twitter.

RELATED: Alabama’s offensive line ranks No. 1 in college football, according to Cole Cubelic

OAN, which stands for One American News Network, is a far-right cable channel that was launched on July 4, 2013. The channel is prominent for promoting falsehoods, conspiracy theories and has described itself as one the greatest supporters of President Trump.

With the emotional time the U.S. is in and the re-commitment of African Americans to fight for social justice, equality and end systemic racism, more athletes are calling for change.

They know that this generation is the one to bring about a solution.