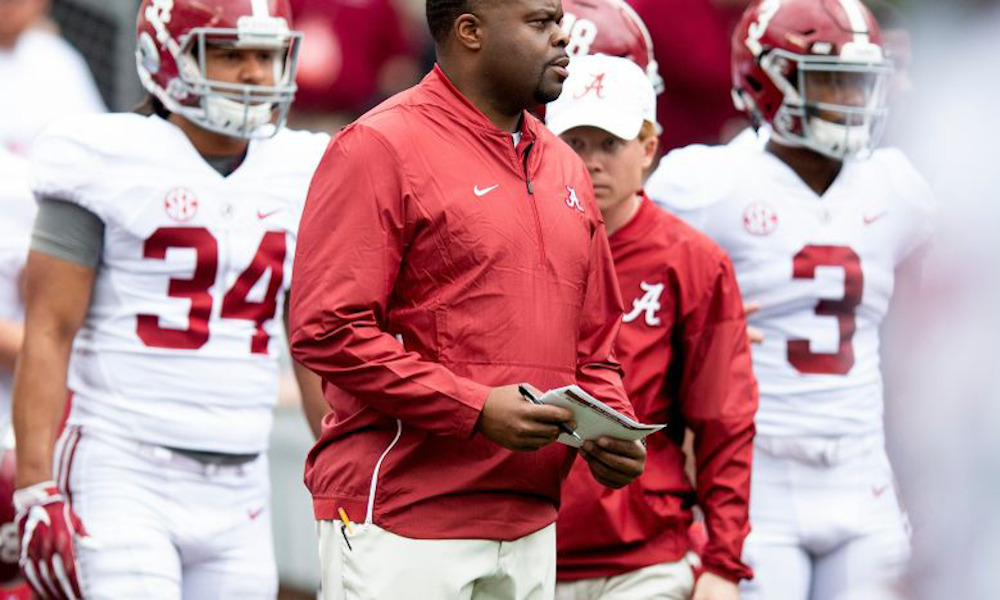 In this series of articles, yours truly of Touchdown Alabama Magazine will be grading the performance of Alabama’s assistant coaches from last season. This will be a breakdown of analysis, strengths, weaknesses, projections and an overall grade for each coach. The purpose of this is to provide Crimson Tide fans with an in-depth look at all position coaches and coordinators on staff.

RELATED: Alabama is no longer the undisputed king of the SEC, according to one ESPN analyst

After talking with various respectable sources within the program, listed below is the evaluation of running backs’ coach Charles Huff.

-Time spent at Alabama: One year

Analysis: “Coach Huff pushes all of his guys to give effort. He’s the Nate Oats (Alabama men’s basketball coach) of football. He is also really starting to pop in recruiting, as young athletes appreciate the way he sells the program. The biggest thing with Huff, in terms of Alabama running backs, is getting them to be more aggressive. Players like Najee Harris and Brian Robinson must become one cut and go type of players. He has pretty good attention to details; however, Huff has to sell Robinson on being a power back. At times, Robinson tries to be like Harris with the spin move, hurdles and finesse things. He is a throwback runner.”- Sources

One does not learn Nick Saban in one year, but Charles Huff did well enough last season to propel Najee Harris to his first career 1,000-yard rushing campaign. He started to become more aggressive in the middle of the year – totaling six 100-yard performances. Much like he accomplished in three years at Penn State with Saquon Barkley, Huff turned Harris into a valuable receiver. The former five-star caught 27 passes, with seven for touchdowns.

He improved Robinson’s numbers, as the junior had 441 yards rushing with five scores and exposed fans to the speed of Keilan Robinson (two touchdowns). Despite an injury to Tua Tagovailoa, the Tide’s offense became more balanced as it leaned more on the running game.

He has coached seven 1,000-yard rushers in his career; nevertheless, year No. 15 will be a marquee one for Huff. He has a motivated Harris returning and a Trey Sanders, who did not see action in 2019 due to an injury. With four primary athletes and three freshmen, Huff must find ways to feature everyone but also keep them in the mind of developing their own skill set.

Tagovailoa is now in the National Football League, which means more responsibilities will transition to the running backs.

The players are working hard this summer and if each one takes the next step to be a complete back, then Huff has a major opportunity to earn an A or A+.

This season, it will be on Huff to have guys become faster and more explosive on a consistent basis.