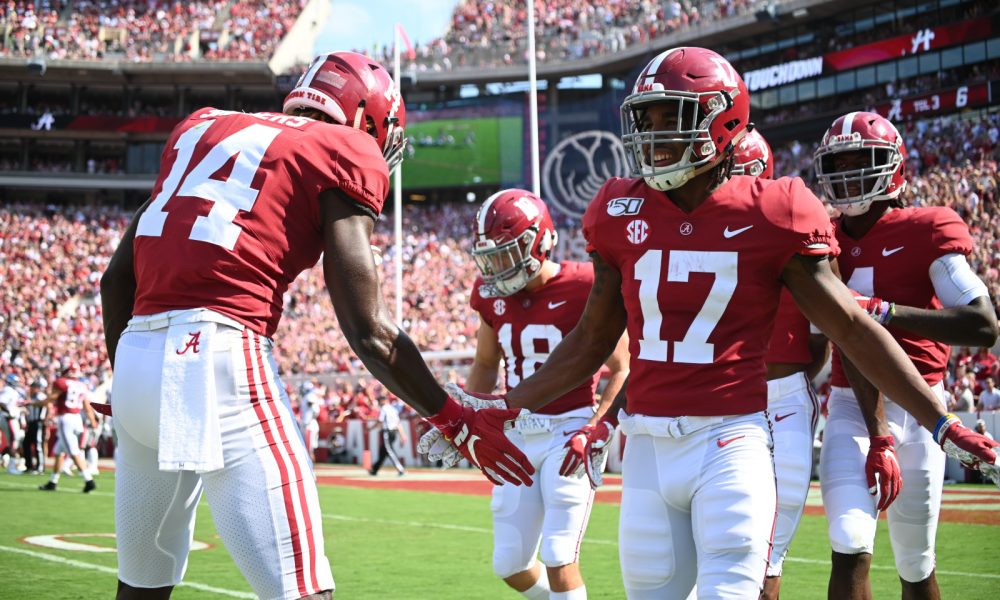 For defensive coordinator and players in the secondary that believe he is only a speed athlete, Jaylen Waddle is about to provide a rude awakening this season at wide receiver.

With a lot of attention going to Devonta Smith, the junior from Houston, Texas will gain more opportunities to be explosive.

After having coaches, teammates and fans scream his name at the University of Alabama as a true freshman in 2018, Waddle built on his credibility last year by totaling 1,227 all-purpose yards with eight touchdowns. He recorded a punt return and kick return for a score, while being one of five players to catch at least 20 passes.

The 5-foot-10, 182-pound dynamo will be among the top prospects for the 2021 NFL Draft and on Tuesday, NFL Draft expert Daniel Jeremiah put the microscope on Waddle during his evaluation.

Within the positive notes he took included Waddle’s rare explosiveness, change-of-direction quickness and instincts. The former NFL scout said the junior is ‘one of the best run-after-catch prospects he’s ever evaluated.’ Jeremiah likes Waddle’s ability to take small gains and create instant offense.

He sees him as a deep threat at receiver and a nightmare for defenses on special teams; however, there are two areas to Waddle’s game that Jeremiah wants to see improvement.

His current teammate in Devonta Smith and former teammate in Jerry Jeudy are both recognized as polished route runners. Regardless of his speed, Waddle has to be able to set up defenders with different route concepts and consistently get in/out of breaks.

Jeremiah also noted his hands must get better at catching passes, whether accurate or poorly thrown.

Waddle’s number of receptions dropped between 2018 and 2019, 48 to 33, but it’s because he was behind Jeudy, Smith and Henry Ruggs III. With Jeudy and Ruggs now in the National Football League, Waddle will have more than enough chances to be consistent in his route running and catching abilities. Jeremiah loves Waddle’s ability to be a game breaker on the field and while he would draw comparisons to players such as Deebo Samuel, Marquise Brown and KJ Hamler, the draft analyst said Waddle reminds him of former NFL standout Santana Moss.

An alumnus of the University of Miami, Moss was a dynamic wide receiver and return specialist for the Hurricanes. He played with the Jets and the Washington Football Team, totaling 10,283 career receiving yards and 66 scores.

The 5-foot-10, 193-pounder had the same body structure and abilities as Waddle does.

Moss had to learn to become a crafted route runner, but he made it happen.

Jeremiah sees this type of pro career from Waddle, yet he may potentially be better than Moss.