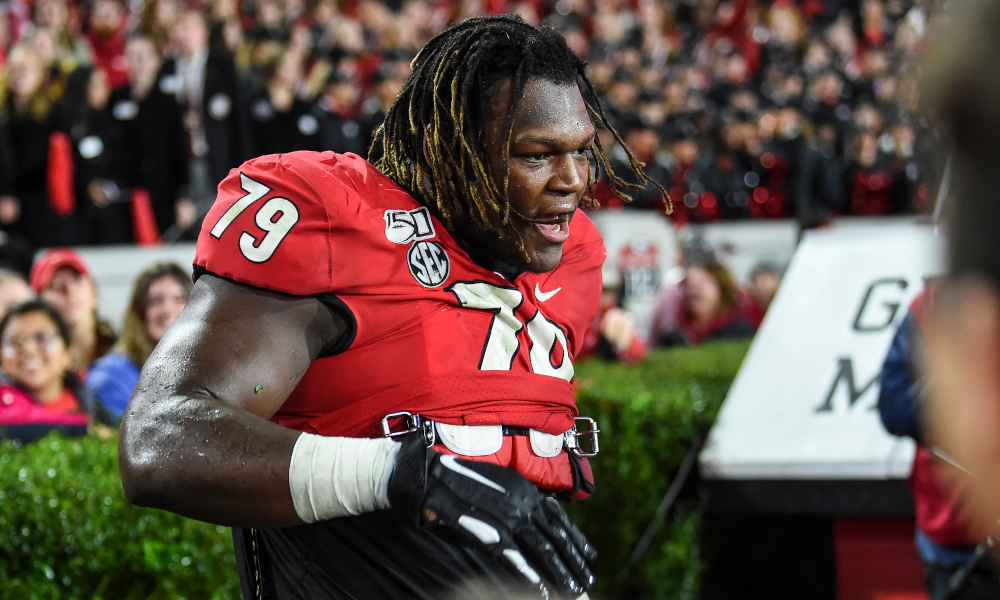 During his 13 years as head coach of the University of Alabama football program, Nick Saban rarely misses out on a marquee five-star athlete. In his five national championship seasons, it has been the headline names on the recruiting trail that pushed him to the top of the college football mountain. However, the great ones do suffer losses every now and again.

In a segment of “Bussin’ With The Boys” via Barstool Sports, Taylor Lewan (Tennessee Titans) and Will Compton (NFL free agent) had former Georgia offensive lineman, Isaiah Wilson on the show. Wilson, an offensive tackle for the Bulldogs from 2017-19, was a five-star recruit that got selected by the Titans in the first round of this year’s NFL Draft.

RELATED: WATCH: Tua Tagovailoa back on a football practice field with the Miami Dolphins

Wilson was on Georgia’s 2017 roster that played the Crimson Tide in the 2018 College Football Playoff National Championship Game, but suffered a 26-23 loss. Despite the Tide signing both Alex Leatherwood and Jedrick Wills in 2017, Saban had a chance to snatch Wilson too.

He told Lewan that Alabama was one of the schools in his top five and he was actually committed to the program for a while.

It took Tua Tagovailoa coming from Hawaii to soften his head coach, unfortunately one small gesture kept Saban from getting an elite offensive tackle.

*Wilson talks on Saban not giving him a hug at 20:12 mark

“Nick Saban did not give me a hug, so I de-committed,” Wilson said on Bussin’ With the Boys. “I care about the little things. I committed to them (Alabama) and I was hoping I could get a hug, because he was going to be my coach and I did not get one. I put my arms out, but he just gave me a handshake.”

He may not be the hugging type, but Saban truly cares about his players.

Whether it’s on the field or in the community, he wants to bring out the total human being.

It is interesting to note, however, that a hug kept him from landing a seventh 5-star in the 2017 class.

Recently, he has picked up his recruiting game by doing the Cupid Shuffle among other fun things at the home of various recruits. As he enters his 14th season, Saban eyes a seventh national championship and one that would push him over Paul W. “Bear” Bryant.