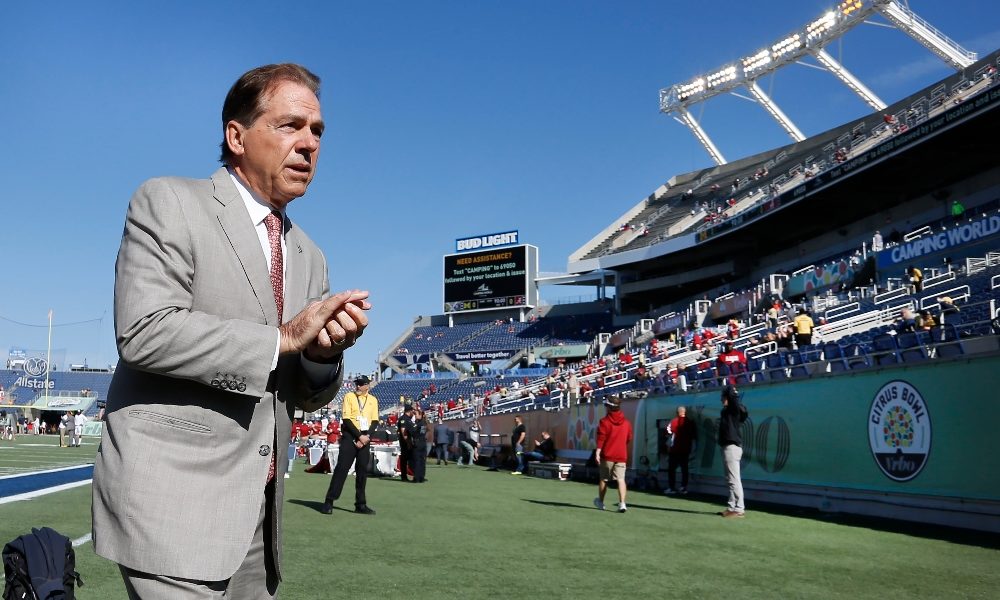 In the wake of discussions surrounding a possible vote to cancel the upcoming college football season, Alabama head coach Nick Saban gave his two cents on the matter during an interview with ESPN.

The head coach made it clear that he and his players are in favor of a season and believe the players are at more of a risk if college football is not played.

“I want to play, but I want to play for the players’ sake, the value they can create for themselves,” Saban told ESPN. “I know I’ll be criticized no matter what I say, that I don’t care about player safety. Look, players are a lot safer with us than they are running around at home. We have around a 2 percent positive ratio on our team since the Fourth of July. It’s a lot higher than that in society. We act like these guys can’t get this unless they play football. They can get it anywhere, whether they’re in a bar or just hanging out.”

Saban has already met with leadership on Monday and following the meeting gathered the team for one of their own.

“It’s more important than ever to engage your players, and if you’re not, then you’re not doing your job as a coach,” said Saban.

A number of other Alabama players have also voiced their opinions regarding the season continuing. Leaders like running back Najee Harris, quarterback Mac Jones and defensive lineman LaBryan Ray have all contributed to the #WeWantToPlay Twitter movement.

Along with laying out the potential risks of not having a season, Saban also shared how he did not understand the rush to making any final decisions.

“It’s going to be a challenge when the other students get on campus, and I get that,” Saban said. “But we really don’t know what that entails until it happens. It’s a big reason we pushed the season back (in the SEC), to assess that, which is the prudent way to do it.”

Also present during the interview was Harris and offensive lineman Alex Leatherwood who discussed the lack of player involvement in the decision making.

“There’s a lot of noise and bad stuff out there about playing football with the virus going on, but I haven’t really seen anything about what the players want,” said Leatherwood. “We’ve been grinding all summer, and you don’t want it to be all for nothing.

“The story that needs to be written is that we want to play.”

Every two weeks Saban and Alabama bring in an epidemiologist to talk to the team about the virus on top of testing each player at the start of every week.

“We also test anybody that has symptoms and have an open testing site where they can go and get tested as many times as they want or any time they feel like they need to,” Saban said. “But our guys aren’t going to catch (the virus) on the football field. They’re going to catch it on campus. The argument then should probably be, ‘We shouldn’t be having school.’ That’s the argument. Why is it, ‘We shouldn’t be playing football?’ Why has that become the argument?”

Harris, the senior running back, was one of 30 players from the Power Five conferences, to participate in a zoom call on Sunday which ended with a resounding agreement to play as long as all the conferences were able to follow the health protocols and that players who opt-out will not lose their scholarship.

“Coach Saban listens to his players and wants to hear from us first,” said Harris. “He told us that none of this is about him, but it’s about us. He wants to hear our concerns, and we made it clear that we want to play and feel like Alabama is doing everything they can to make sure we can play safely.”

Harris also told ESPN that he would sign a waiver stating that he would not sue the university if he were to contract the virus and also shared that he feels safer on Alabama’s campus than he does back home in Antioch, California.

“We want our voices to be heard,” Harris said. “Our main demand on the call was that we as players know the players we’re playing against have all gone through the same testing guidelines, but we want to play.”

Leatherwood also chimed in by saying: “We take risks every single day, especially in this sport, and life shouldn’t stop. If there is a chance for long-term effects if you get it and people don’t feel comfortable, then don’t play. Everybody is entitled to their right. But we want to play, and we’re going to play.”

Both SEC Commissioner Greg Sankey and Alabama Athletic Director Greg Sankey have released comments of their own on the current developments.

Wholeheartedly support our student-athletes, coaches & staff and commend our leadership from the @SEC, @UofAlabama & @UASystem for their direction and guidance as we navigate these issues. #WeWantToPlay #RollTide https://t.co/ULHwgCbtrD

Best advice I’ve received since COVID-19: “Be patient. Take time when making decisions. This is all new & you’ll gain better information each day.” @SEC has been deliberate at each step since March…slowed return to practice…delayed 1st game to respect start of fall semester..

…Deveoped testing protocols…We know concerns remain. We have never had a FB season in a COVID-19 environment. Can we play? I don’t know. We haven’t stopped trying. We support, educate and care for student-athletes every day, and will continue to do so…every day.